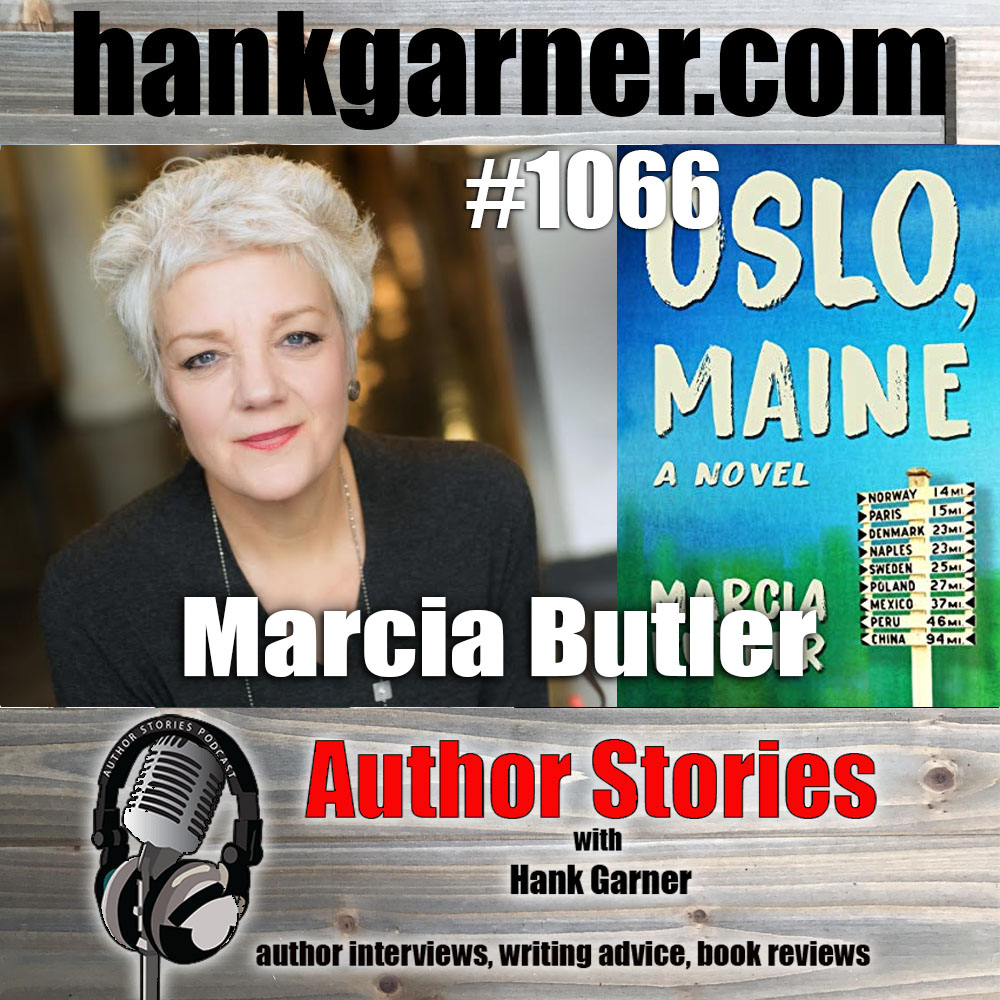 Today’s guest is Marcia Butler who returns to the show to talk about her new book Oslo, Maine.

High praise for Oslo, Maine!
“Wildly plotted, astutely observed, and brimming with wit.”—Adrienne Brodeur
“I raced through this novel in one breathless sitting!”—Karen Dionne
“Marcia Butler is a master dramatist, a sorceress, and extraordinary novelist.”—E.J. Levy
“Oslo, Maine is richly satisfying.”—Bill Roorbach

A moose walks into a rural Maine town called Oslo. Pierre Roy, a brilliant twelve-year-old, loses his memory in an accident. Three families are changed for worse and better as they grapple with trauma, marriage, ambition, and their fraught relationship with the natural world.

Meet Claude Roy, Pierre’s blustery and proud fourth-generation Maine father who cannot, or will not, acknowledge the too real and frightening fact of his son’s injury. And his wife, Celine, a once-upon-a-time traditional housewife and mother who descends into pills as a way of coping. Enter Sandra and Jim Kimbrough, musicians and recent Maine transplants who scrape together a meager living as performers while shoring up the loose ends by attempting to live off the grid. Finally, the wealthy widow from away, Edna Sibley, whose dependent adult grandson is addicted to 1980’s Family Feud episodes. Their disparate backgrounds and views on life make for, at times, uneasy neighbors. But when Sandra begins to teach Pierre the violin, forces beyond their control converge. The boy discovers that through sound he can enter a world without pain from the past nor worry for the future. He becomes a pre-adolescent existentialist and invents an unconventional method to come to terms with his memory loss, all the while attempting to protect, and then forgive, those who’ve failed him.

Oslo, Maine is a character driven novel exploring class and economic disparity. It inspects the strengths and limitations of seven average yet extraordinary people as they reckon with their considerable collective failure around Pierre’s accident. Alliances unravel. Long held secrets are exposed. And throughout, the ever-present moose is the linchpin that drives this richly drawn story, filled with heartbreak and hope, to its unexpected conclusion.

Marcia Butler’s debut novel, Pickle’s Progress, has been hailed by Michael Schaub of NPR as “Surprising and audacious…. Pickle’s Progress is a deeply weird novel that succeeds because of Butler’s willingness to take risks and her considerable charisma — she’s a gifted storyteller with a uniquely dry sense of humor and a real sympathy for her characters… a promising fiction debut from a writer who seems incapable of not going her own way.” Vulture and Refinery 29 listed it as one of their top books of April 2019. Her nationally acclaimed memoir, The Skin Above My Knee, was one of the Washington Post’s “top ten noteworthy moments in classical music in 2017”. Her writing has been published in The Washington Post, Literary Hub, PANK Magazine, Psychology Today, Aspen Ideas Magazine, Catapult, Bio-Stories, Kenyon Review and others.Marcia has had several creative careers: professional musician, interior designer, documentary filmmaker, and author. As an oboist, the New York Times hailed her as a “first rate artist.” During her musical career, she performed as a principal oboist and soloist on the most renowned of New York and international stages, with many high-profile musicians and orchestras – including pianist Andre Watts and composer/pianist Keith Jarrett. Her interior designs projects have been published in numerous shelter magazines and range up and down the East coast, from NYC to Miami. The Creative Imperative, her documentary film exploring the essence of creativity, was premiered at The New York Society Library in New York City on June 9, 2019 and is now available on YouTube.

Marcia was a 2015 recipient of a Writer-in-Residence through Aspen Words and the Catto Shaw Foundation. She was a writing fellow at the Virginia Center for the Creative Arts in 2018 and 2019. Her third book, Oslo, Maine, draws on indelible memories of performing for many years at a chamber music festival in central Maine. While there, Marcia came to love the people, the diverse topography, and especially the majestic and endlessly fascinating moose who roam, at their perpetual peril, among the humans. After decades in The Big Apple, Marcia now calls the Land of Enchantment home.