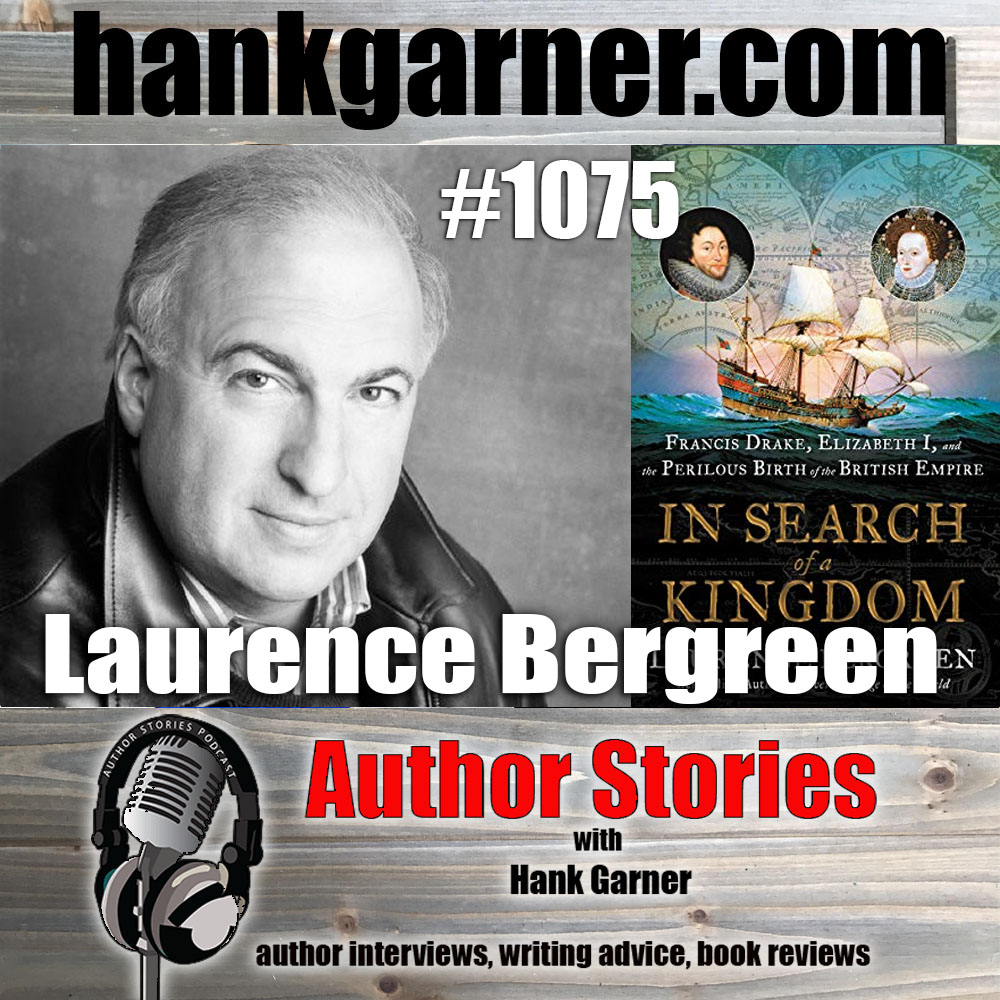 Today’s author interview guest is Laurence Bergreen, author of In Search of a Kingdom: Francis Drake, Elizabeth I, and the Perilous Birth of the British Empire.

In this grand and thrilling narrative, the acclaimed biographer of Magellan, Columbus, and Marco Polo brings alive the singular life and adventures of Sir Francis Drake, the pirate/explorer/admiral whose mastery of the seas during the reign of Queen Elizabeth I changed the course of history

Before he was secretly dispatched by Queen Elizabeth to circumnavigate the globe, or was called upon to save England from the Spanish Armada, Francis Drake was perhaps the most wanted–and successful–pirate ever to sail. Nicknamed “El Draque” by the Spaniards who placed a bounty on his head, the notorious red-haired, hot-tempered Drake pillaged galleons laden with New World gold and silver, stealing a vast fortune for his queen–and himself. For Elizabeth, Drake made the impossible real, serving as a crucial and brilliantly adaptable instrument of her ambitions to transform England from a third-rate island kingdom into a global imperial power.

The relationship between Drake and Elizabeth is the missing link in our understanding of the rise of the British Empire, and its importance has not been fully described or appreciated. Framed around Drake’s key voyages as a window into this crucial moment in British history, In Search of a Kingdom is a rousing adventure narrative entwining epic historical themes with intimate passions.

Laurence Bergreen is an award-winning biographer, historian, and chronicler of exploration. His books have been translated into over 25 languages worldwide.

In May 2017, Roaring Brook Press, a division of Macmillan, published his first Young Adult book, Magellan: Over the Edge of the World, an adaptation of his international bestseller. His most recent adult book is Casanova: The World of a Seductive Genius, published by Simon & Schuster in 2016.

In October 2007, Alfred A. Knopf published Marco Polo: From Venice to Xanadu, a groundbreaking biography of the iconic traveler.

His previous work, Over the Edge of the World: Magellan’s Terrifying Circumnavigation of the Globe, was published by William Morrow in October 2003. A New York Times “Notable Book” for 2003, it is also in development as a motion picture and is now in its 33rd printing. This book was awarded the Medalla de Honor by the Asociación de Alcades de V Centenario (spain), 2010.

In 1997, Bantam Doubleday Dell published Louis Armstrong: An Extravagant Life, a comprehensive biography drawing on unpublished manuscripts and exclusive interviews with Armstrong colleagues and friends. It appeared on many “Best Books of 1997” lists, including those of the San Francisco Chronicle, the Philadelphia Inquirer, and Publishers Weekly, and has been published in Germany, Finland, and Great Britain. In 1994, Simon & Schuster published his definitive Capone: The Man and the Era. A Book-of-the-Month Club selection, it has been published in numerous foreign languages, was optioned by Miramax, and was a New York Times “Notable Book.”

His biography, As Thousands Cheer: The Life of Irving Berlin, appeared in 1990. This book won the Ralph J. Gleason Music Book Award and the ASCAP-Deems Taylor award and received front-page reviews in major American and British newspapers and appeared on bestseller lists; it was also a New York Times “Notable Book” for 1990. His previous biography, James Agee: A Life, was also critically acclaimed and was a New York Times “Notable Book” for 1984. His first book was Look Now, Pay Later: The Rise of Network Broadcasting, published by Doubleday in 1980.

He has written for many national publications including The New York Times, The Wall Street Journal, The Los Angeles Times, Esquire, Newsweek, The Chicago Tribune, and Military History Quarterly. He has taught at the New School for Social Research, Kenyon College and served as Assistant to the President of the Paley Center for Media in New York. He has served as a judge for the National Book Awards and the PEN/ Albrand Nonfiction Award. A frequent lecturer at major universities and symposiums, and, on occasion, aboard cruise ships, he has served as a Featured Historian for the History Channel.

Mr. Bergreen graduated from Harvard University in 1972. He is a member of PEN American Center, The Explorers Club, the Authors Guild, and the Board of Trustees of the New York Society Library. He lives in New York City and is represented by Dan Conaway of Writers House.