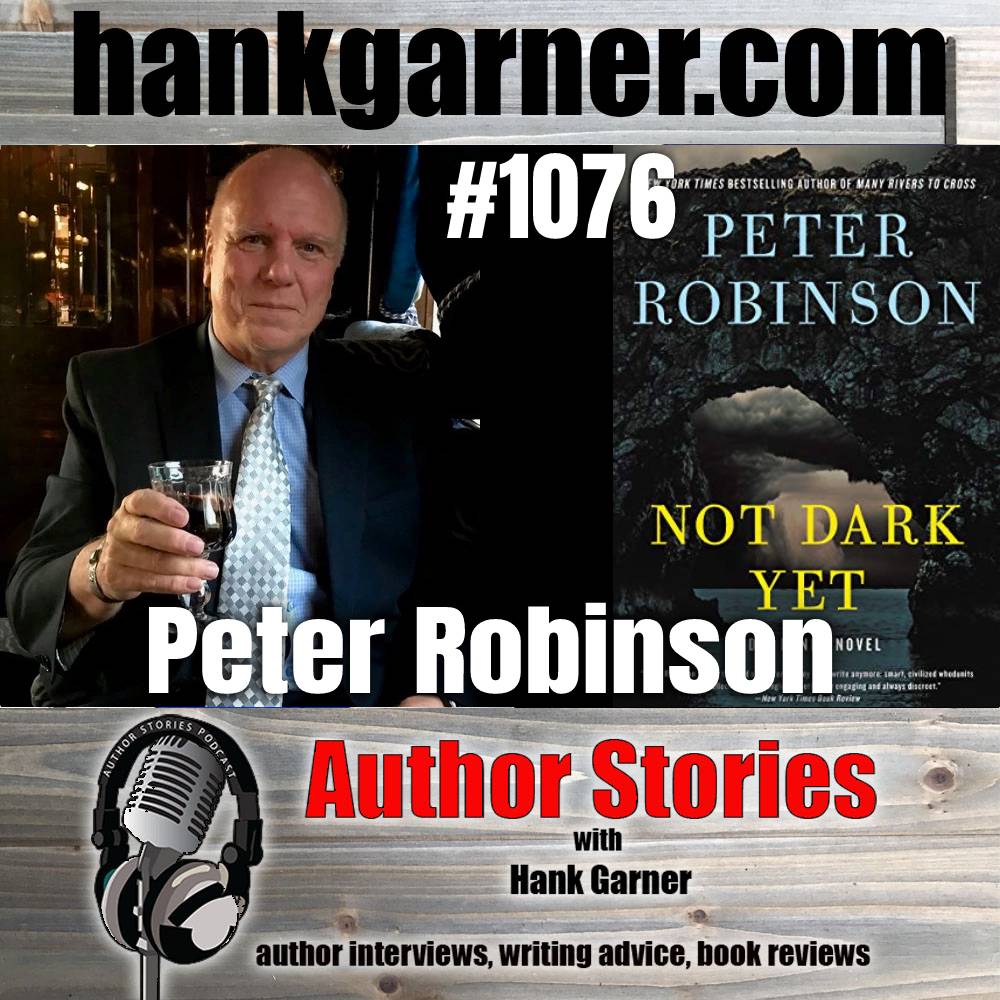 Today Peter Robinson returns to the show to talk about his newest DCI Banks book Not Dark Yet.

“Robinson is an author with amazing empathy, a snare-trap ear for dialogue, and a clear eye for the telling detail.”—Michael Connelly

One of the world’s greatest suspense writers returns with the 27th novel featuring the legendary detective Alan Banks in the mystery series Stephen King calls “the best now on the market.”

When property developer Connor Clive Blaydon is found dead, Detective Chief Inspector Alan Banks and his Yorkshire team dive into the investigation. As luck would have it, someone had installed a cache of spy-cams all around his luxurious home. The team hope that they’ll find answers—and the culprit—among the video recordings.

Instead of discovering Connor’s murderer, however, the grainy and blurred footage reveals another crime: a brutal rape. If they can discover the woman’s identity, it could lead to more than justice for the victim; it could change everything the police think they know about Connor and why anyone would want him dead.

Meanwhile, tensions are rising between Banks and his friend, Zelda. A super recognizer—able to recognize faces significantly better than most people—Zelda is determined to bring the men who abused her to justice. But stirring up the murky waters of the past will put her in far greater danger than ever before, and Banks worries that he won’t be able to stop her from plunging too deep before it’s too late.

His first novel, Gallows View (1987), introduced Detective Chief Inspector Alan Banks. It was short-listed for the John Creasey Award in the UK and the Crime Writers of Canada best first novel award. A Dedicated Man followed in 1988 and was short-listed for the CWC’s Arthur Ellis Award. A Necessary End and The Hanging Valley, both Inspector Banks novels, followed in 1989, and the latter was nominated for an Arthur. Both received starred reviews in Publishers Weekly in the US.

Caedmon’s Song, the first departure from the series, was published in 1990 and was also nominated for an Arthur. (It was reissued in the UK by Macmillan in September, 2003, and was published for the first time in the US by Avon Dark Passage in September, 2004, as The First Cut.) The fifth Inspector Banks novel, Past Reason Hated, won the Arthur Ellis Award for Best Novel in 1992. The sixth, Wednesday’s Child, was nominated for an Edgar Award by the Mystery Writers of America. Final Account (UK: Dry Bones that Dream) appeared in 1994 and won an Author’s Award from the Foundation for the Advancement of Canadian Letters in 1995.

The eighth Inspector Banks novel, Innocent Graves (1996) was picked as one of Publishers Weekly’s best mysteries of 1996 and selected as “page-turner of the week” by People magazine. Innocent Graves was also nominated for a Hammett Award for “literary excellence in the field of crime writing” by the International Association of Crime Writers, and won the author his second Arthur Ellis Award for best novel. In a Dry Season, the tenth in the series, won the Anthony and Barry awards for best novel and was nominated for the Edgar, Hammett, Macavity and Arthur Ellis Awards. In 2001, it also won France’s Grand Prix de Littérature Policière and Sweden’s Martin Beck Award. It was also a New York Times “notable book” of 1999. The next book Cold is the Grave, won the Arthur Ellis Award and was nominated for the Los Angeles Times Book Award. In 2006 it won the Danish Palle Rosenkrantz Award. Aftermath appeared in 2002 and made the top ten in both the UK and Canadian bestseller lists, where it reached number one. Aftermath was also the pilot in the DCI Banks TV series, which was produced by Left Bank and ran in ITV from 2011 to 2017, starring Stephen Tompkinson, Andrea Lowe, Caroline Catz, Lorraine Burroughs, Jack Deam and Keith Barron.

In 2002, Robinson was awarded the “Dagger in the Library” by the CWA. The thirteenth Banks novel, The Summer that Never Was (US: Close to Home), appeared on the New York Times expanded bestseller list in February, 2003, and on both the UK and Canadian bestseller lists and was nominated for an Arthur Ellis and an Anthony award. Playing with Fire, published in January, 2004, was nominated for both the Arthur Ellis and Hammett awards. Strange Affair (January, 2005) was nominated for Arthur Ellis and a Macavity awards..The books have been translated into twenty languages. Piece of My Heart appeared in 2006, and in 2007, Friend of the Devil reached Number One in the Sunday Times hardcover bestseller list. There have been many number one bestsellers since then. In January, 2008, Robinson was presented with the Celebrates Reading Award by the Toronto Libraries. Both Before the Poison and Sleeping in the Ground were also Ellis Award winners in 2012 and 2018 respectively. Before the Poison also won the Golden Crowbar (formerly Martin Beck) Award from the Swedish Crime Writers and the Dilys Award in the USA. In 2014 and 2016 he also won awards in Finland and Poland. In 2006 he was invited to join The Detection Club.

Robinson has also published many short stories. “Innocence” won the CWC Best Short Story Award, 1991. “The Two Ladies of Rose Cottage,” which appeared in Malice Domestic 6, edited by Anne Perry, in April 1997, won the Macavity Award and was nominated for both the Agatha and Arthur Ellis awards. It was also performed, with music and songs by Eliza Carthy, at the Beverley Folk Festival, Yorkshire, in 2006. He has also performed with Eliza on a number of other occasions, and with her father, Martin Carthy, most recently at the Richmond Walking and Books Festival in September 2018. His first collection of short stories, Not Safe After Dark and Other Stories, was published in 1998 by Crippen & Landru. An expanded version, including the Banks novella “Going Back”, was published by McClelland & Stewart in Canada and Macmillan in the UK in September, 2004. “Murder in Utopia” won Robinson his fifth Ellis Award in 2001, and the same year “Missing in Action” won the Edgar Award. In 2007, Robinson edited the The Penguin Book of Crime Stories, which was published to great critical acclaim. His second collection of short stories, The Price of Love, was published in 2009.

Robinson now divides his time between Toronto and Richmond, North Yorkshire. He is presently working on a Banks trilogy, which began with Careless Love in 2018 and continues with Many Rivers to Cross in 2019. The final volume, as yet untitled, should appear in the autumn of 2020.