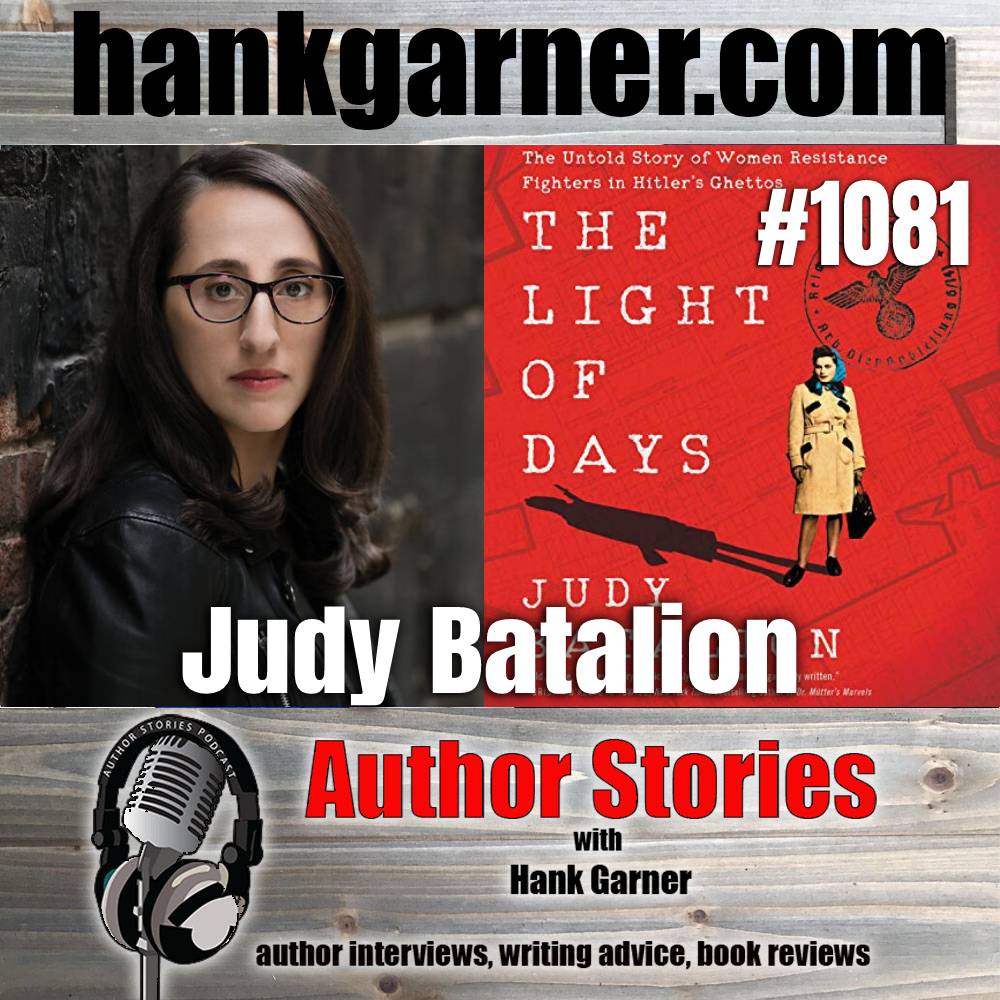 Today’s author interview guest is Judy Batalion, author of The Light of Days: The Untold Story of Women Resistance Fighters in Hitler’s Ghettos.

One of the most important stories of World War II, already optioned by Steven Spielberg for a major motion picture: a spectacular, searing history that brings to light the extraordinary accomplishments of brave Jewish women who became resistance fighters – a group of unknown heroes whose exploits have never been chronicled in full, until now.

Witnesses to the brutal murder of their families and neighbors and the violent destruction of their communities, a cadre of Jewish women in Poland – some still in their teens – helped transform the Jewish youth groups into resistance cells to fight the Nazis. With courage, guile, and nerves of steel, these “ghetto girls” paid off Gestapo guards, hid revolvers in loaves of bread and jars of marmalade, and helped build systems of underground bunkers. They flirted with German soldiers, bribed them with wine, whiskey, and home cooking, used their Aryan looks to seduce them, and shot and killed them. They bombed German train lines and blew up a town’s water supply. They also nursed the sick and taught children.

Yet the exploits of these courageous resistance fighters have remained virtually unknown.

As propulsive and thrilling as Hidden Figures, In the Garden of Beasts, Band of Brothers, and A Train in Winter, The Light of Days at last tells the true story of these incredible women whose courageous yet little-known feats have been eclipsed by time. Judy Batalion – the granddaughter of Polish Holocaust survivors – takes us back to 1939 and introduces us to Renia Kukielka, a weapons smuggler and messenger who risked death traveling across occupied Poland on foot and by train. Joining Renia are other women who served as couriers, armed fighters, intelligence agents, and saboteurs, all who put their lives in mortal danger to carry out their missions. Batalion follows these women through the savage destruction of the ghettos, arrest, and internment in Gestapo prisons and concentration camps, and for a lucky few – like Renia, who orchestrated her own audacious escape from a brutal Nazi jail – into the late 20th century and beyond.

Powerful and inspiring, The Light of Days is an unforgettable true tale of war, the fight for freedom, exceptional bravery, female friendship, and survival in the face of staggering odds.

Judy Batalion was born and raised in Montreal, where she grew up speaking English, French, Yiddish and Hebrew, and trying to stay warm. She studied the history of science at Harvard then moved to London to pursue a PhD in art history. All the while, she worked as a curator, researcher, editor, lecturer, comic, MC, script-reader, dramaturge, performer, actor, producer, translator, mmmuffins server, and a temp – at a temp agency. Eventually, Judy transformed these experiences into material, and wrote essays and articles for the New York Times, the Washington Post, Vogue, the Forward, Salon, the Jerusalem Post and many other publications. Her stories about family relationships, the generational transmission of trauma, pathological hoarding and militant minimalism came together in her book White Walls: A Memoir About Motherhood, Daughterhood, and the Mess in Between (NAL/Penguin, 2016). White Walls was optioned by Warner Brothers for whom Judy is currently developing the TV series “Cluttered.”

Back in 2007, during her phase of career promiscuity, Judy was doing research on strong Jewish women at the British Library when she happened to come across a dusty, old Yiddish book. Freuen in di Ghettos (Women in the Ghettos), a Yiddish thriller about “ghetto girls” who hid revolvers in teddy bears, bribed Nazis with whiskey and pastry, and blew up German supply trains, became the inspiration for The Light of Days: The Untold Story of Women Resistance Fighters in Hitler’s Ghettos (William Morrow/HarperCollins, 2021). The Light of Days will be published across Europe, and in Brazil and Israel, and was optioned by Steven Spielberg’s Amblin Partners, for whom Judy is co-writing the screenplay. (Gey veys… Who knew that Yiddish would become her cash cow?)

Judy lives with her husband and three children in New York City.