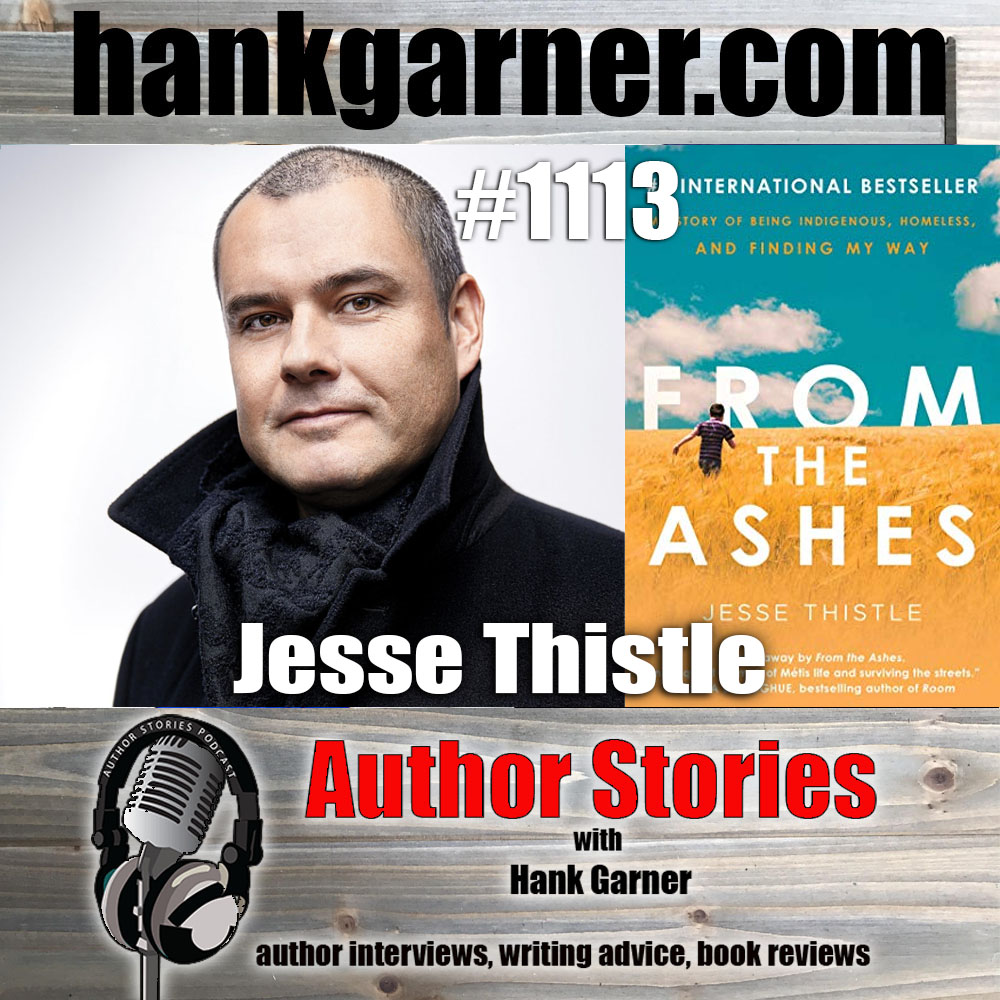 Today’s author interview guest is Jesse Thistle, author of From the Ashes: My Story of Being Indigenous, Homeless, and Finding My Way.

This #1 internationally bestselling and award-winning memoir about overcoming trauma, prejudice, and addiction by a Métis-Cree author as he struggles to find a way back to himself and his Indigenous culture is “an illuminating, inside account of homelessness, a study of survival and freedom” (Amanda Lindhout, bestselling coauthor of A House in the Sky).

Abandoned by his parents as a toddler, Jesse Thistle and his two brothers were cut off from all they knew when they were placed in the foster care system. Eventually placed with their paternal grandparents, the children often clashed with their tough-love attitude. Worse, the ghost of Jesse’s drug-addicted father seemed to haunt the memories of every member of the family.

Soon, Jesse succumbed to a self-destructive cycle of drug and alcohol addiction and petty crime, resulting in more than a decade living on and off the streets. Facing struggles many of us cannot even imagine, Jesse knew he would die unless he turned his life around. Through sheer perseverance and newfound love, he managed to find his way back into the loving embrace of his Indigenous culture and family.

Now, in this heart-wrenching and triumphant memoir, Jesse Thistle honestly and fearlessly divulges his painful past, the abuse he endured, and the tragic truth about his parents. An eloquent exploration of the dangerous impact of prejudice and racism, From the Ashes is ultimately a celebration of love and “a story of courage and resilience certain to strike a chord with readers from many backgrounds” (Library Journal).

Jesse Thistle is a Métis-Cree-Scot Ph.D. Candidate in the History program at York University in Toronto, he also teaches there as an assistant professor where he is working on theories of intergenerational and historic trauma of the Métis people. This work, which involves reflections on his own previous struggles with addiction and homelessness, has been recognized as having a wide impact on both the scholarly community and the greater public.

Family and personal life
Thistle was born in Prince Albert, Saskatchewan. In 1979 he and his two brothers were removed from his family home and moved to Brampton, Ontario to be brought up by his paternal grandparents. During his late teens and twenties, Thistle struggled with addiction, homelessness and served several brief stints in jail for petty theft. After an unsuccessful robbery attempt in 2006, Thistle turned himself in to police and entered a drug rehabilitation program. In 2012 he entered the undergraduate history program at York University.

Thistle is married to Lucie Pekarek-Thistle and lives in Toronto.

Much of Thistle’s historical research is based on the stories and experience of his family and ancestors. His mother, Blanche Morissette, is Métis-Cree and was a member of the Park Valley road allowance community in Big River, Saskatchewan. His father, Cyril “Sonny” Thistle, is of Scot-Algonquin ancestry and has been missing since 1982. Thistle’s maternal great grandmother, Marianne Ledoux Morissette, was present and supported the Métis Resistance in 1885 during the Battle of Batoche. The documentary Family Camera produced by Jeanette Loakman includes images of the Morissette family and interviews with Thistle, his mother and aunts where they recount the history and experience of living in the road allowance community and the legacy of the Canadian government’s treatment of the Métis people.

Education
Thistle obtained an Bachelor of Liberal Arts and Professional Studies with a Specialized Honours in History from York University in 2015. His undergraduate thesis is entitled: James Bay and Mattawa as an Interconnected Fur Trade Region: Illuminating Lake Timiskaming’s Historic Metis Community and was supervised by York historian Carolyn Prodruchy. He completed a Masters of History at the University of Waterloo in 2016 where his thesis was entitled: The Puzzle of the Morrissette-Arcand Clan: A History of Metis Historic and Intergenerational Trauma and where he worked with Susan Roy. In the fall of 2016 Thistle began work on a PhD in the History Department at York University.

Thistle is a Trudeau Scholar, a prestigious award administered by the Pierre Elliott Trudeau Foundation, a Vanier scholar and was awarded a Governor General’s Silver Medal in 2016. He has won numerous other awards, including the Odessa Award in 2014 and the Dr. James Wu prize in 2015 for his paper “We are children of the river: Toronto’s Lost Metis History.”

Professional work
Thistle’s use of academic research as a means of healing and understanding of his personal story as an Indigenous person growing up disconnected from his community and its history and his past experiences with homelessness, addiction and incarceration has formed the basis for his original and innovative research contributions. Thistle’s historical research has used his own past and identity as a way to examine the position of Metis people and culture within Canadian society, particularly around the idea of inter-generational trauma. The idea is that trauma suffered by previous generations can echo through the generations.

Early historical research Thistle conducted to argue in favour of the possibility of habitation of Métis people in the historic area of Toronto was revisited by Thistle in 2016 in the article “Listening to History: Correcting the Toronto Metis Land Acknowledgement.” Thistle’s research now suggests there were no permanent Métis settlements in Toronto and he suggests the standard land acknowledgement text used in the Toronto-area, in particular by the Toronto District School Board, that include the Metis is incorrect. A position he reiterates in an article in the New Yorker magazine.

The main thrust of Thistle’s research involves research into the road allowance Métis in Saskatchewan through the research into his own family history. The recovery of his family history and making connections to his Indigenous culture through archival documents forms the backbone of his practice and documented in the article “Archives as Good Medicine” as well as in the short film kiskisiwin | remembering, a documentary film directed by Martha Stiegman. Along with Podruchny, Thistle conducted a series of site visits and interviews in northern Saskatchewan and his PhD thesis is entitled: Indigence, Invisibility, and Indifference: Metis Life in Road Allowances Communities on the Canadian Prairies.