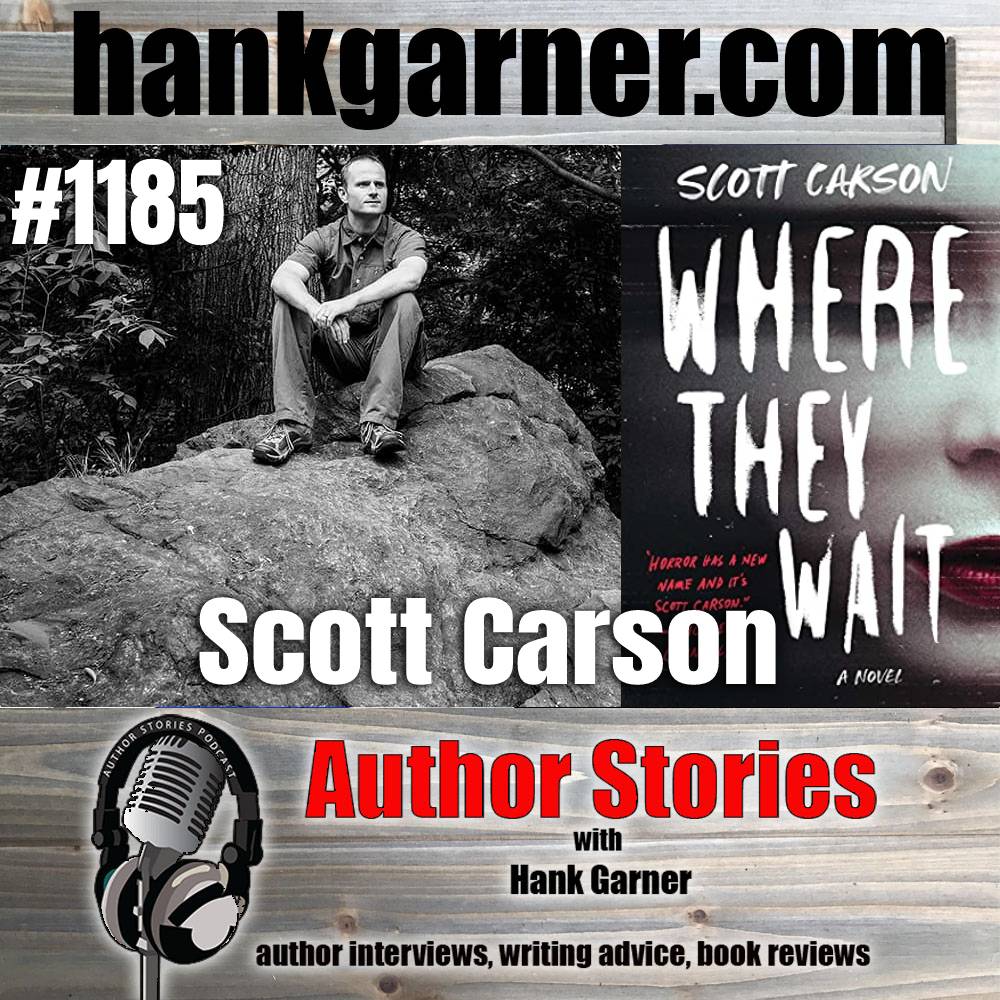 Today I am excited to welcome back Scott Carson to talk about his new book Where They Wait.

“Where They Wait is so readable, you’ll be a couple of hundred pages in before you realize you’re terrified…and then you can’t put it down. Mesmerizing.” —Stephen King

“A taut, creepy techno-chiller that will leave you hearing ghosts.” —Paul Tremblay, author of A Head Full of Ghosts and Survivor Song

A new supernatural novel about a sinister mindfulness app with fatal consequences from the New York Times bestselling author of The Chill.

Recently laid-off from his newspaper and desperate for work, war correspondent Nick Bishop takes a humbling job: writing a profile of a new mindfulness app called Clarity. It’s easy money, and a chance to return to his hometown for the first time in years. The app itself seems like a retread of old ideas—relaxing white noise and guided meditations. But then there are the “Sleep Songs.” A woman’s hauntingly beautiful voice sings a ballad that is anything but soothing—it’s disturbing, and more of a warning than a relaxation—but it works. Deep, refreshing sleep follows.

So do the nightmares. Vivid and chilling, they feature a dead woman who calls Nick by name and whispers guidance—or are they threats? And her voice follows him long after the song is done. As the effects of the nightmares begin to permeate his waking life, Nick makes a terrifying discovery: no one involved with Clarity has any interest in his article. Their interest is in him.

Scott Carson is the pen name for a New York Times bestselling author and screenwriter. He lives in New England.

WHERE THEY WAIT is the new book out now by Scott Carson.

THE CHILL was my first foray into the supernatural territory of THE RIDGE and SO COLD THE RIVER in – this is hard to believe – nearly a decade. It has a beautiful cover and, for the first time in my career, it has some pictures on the inside, too!

Savvy readers might detect something unique about THE CHILL compared to the rest of my work, which is that my name isn’t on the cover. Baffled? Me, too. Let’s dive into some FAQ’s to see what we can figure out. Starting with…

Why are you using a pseudonym?

A few reasons. To have fun with you, most of all. I’ll enjoy seeing who is paying attention!

I feel like most writers secretly desire another identity. Why pass on the chance to blame someone else for your typos? Many of my literary heroes have written under multiple names, and most of them seem to have had some fun with it.

It’s also the fulfillment of a lifelong fantasy: having a name that could be spelled and pronounced.

What type of book does Scott Carson write?

Scott Carson is going to handle the supernatural stories for me. This lets me sleep better at night. And because, as noted, it has been nearly a decade since I dipped my toe into the dark side, so I figured it would be worthwhile to hand the ghost stories off to another name, thus cleansing myself of their curses. (If you think novels about assassins or cold cases or forest fires threatening children on the run qualify as “the dark side” then you disappoint me.)

Why did you pick the name Scott Carson?

Because Scott(y) Carson is one of my favorite figures of film and literature, the scout who signed Roy Hobbs in THE NATURAL, but never appears on the screen. He is trusted by both Pop Fisher (good) and the Judge (evil.) Which one of them was right to trust him? What are his motives? Was he the dumbest baseball scout in history, somehow failing to observe that Roy Hobbs hits every third pitch into the grandstands? Or was he secretly undermining the Judge to help Pop Fisher? These are big questions, people. They matter. I’m open to your opinions. If we can agree on nothing else in 2020, perhaps we can reach a consensus about the intentions and intelligence of the chief scout of the New York Knights.

Why does Scott Carson’s bio say he lives in New England?

When a lifelong Colts fan sets out to write about the darkest horrors in our world, what’s the first place that comes to mind?

Scott spends his time in Maine. Not in Foxboro, Massachusetts. Just want to be real clear on that.

Will I see Scott Carson again?

Damn straight. He’s already pondering another story that he hopes will keep you awake into the night.

Why are you telling us about your secret new identity, instead of keeping it an actual secret?

Because I do not want to have to work for a living. Real jobs terrify me. I would much rather make things up. I can’t do this without you. I thank you. My dog thanks you. My cat…well, he’s never been big on gratitude. But you get the idea.

If you’ve read and enjoyed my books before, I am truly more grateful than you’ll ever know. It’s a special privilege to share stories and characters with people who enjoy them, and it seems rather ungrateful to hide new stories from those who’d like to read them!