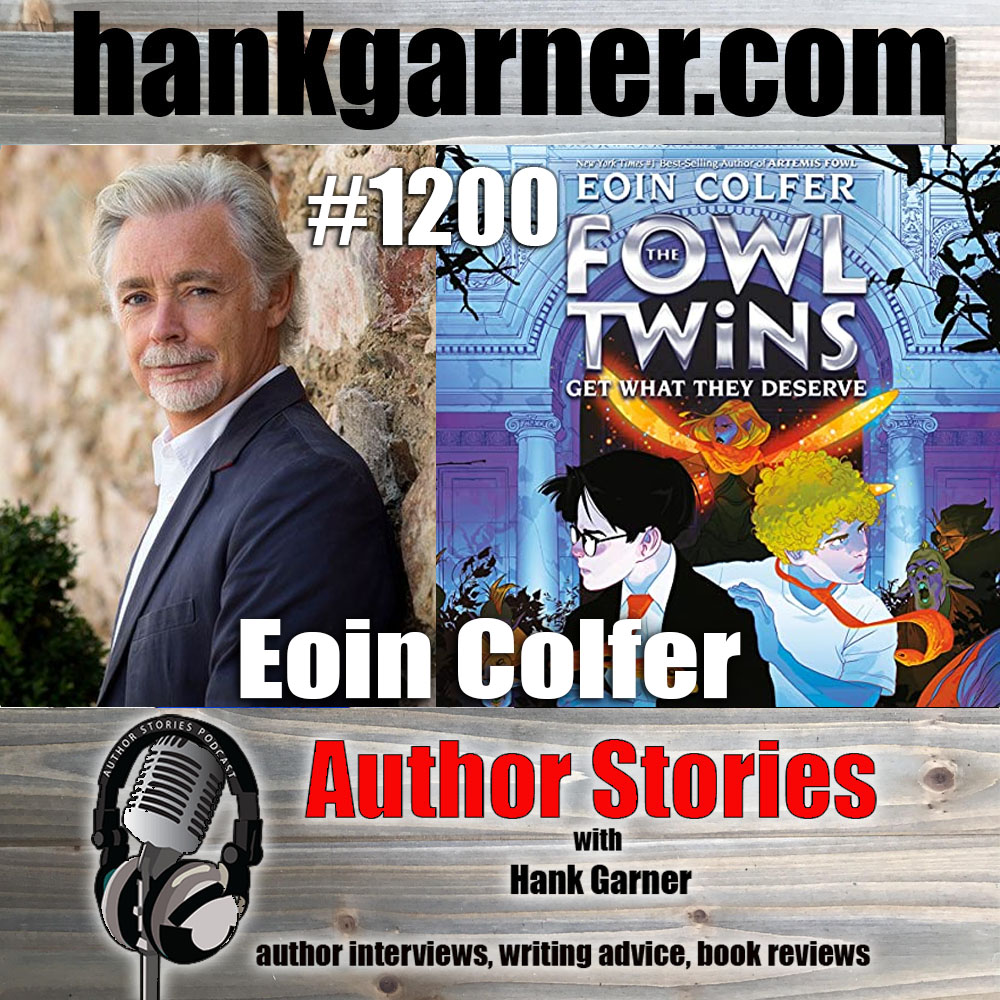 Welcome to Episode 1200 of Author Stories! These last eight years have been fantastic for us and we are blessed to have gotten to spend some quality time with you, the listeners, as well as a host of the most talented storytellers in the world. For episode 1200, all the way from Dublin, Ireland, Eoin Colfer chats with us about his newest book The Fowl Twins Get What They Deserve.

Irish Twins Myles and Beckett, Artemis Fowl’s younger brothers, return in their third and most bizarre adventure yet. *”Like its bestselling progenitors, a nonstop spinoff afroth with high-tech, spectacular magic, and silly business.”– Kirkus (starred review) For almost two years, Lord Teddy Bleedham-Drye, the Duke of Scilly, has been plotting revenge against the Fowl Twins, who humiliated him in Book One. Teddy plans to give them exactly what they deserve: permanent death. He threatens Myles with his weaponized jet and Beckett and Specialist Lazuli succeed in disarming the aircraft and causing an accident that kills the duke. But does it really? Ghosts, clones, and fairy magic come to play in this ultimate and ridiculous showdown between the twins and their worst enemy. Complete your middle grade fantasy collection with these best-selling fan favorites: Artemis Fowl by Eoin Colfer Airman by Eoin Colfer The Percy Jackson and the Olympians series by Rick Riordan Rick Riordan Presents The Storm Runner by J.C. CervantesArtemis Fowl is now a major motion picture streaming on Disney+

Eoin Colfer (pronounced Owen) was born in Wexford on the South-East coast of Ireland in 1965, where he and his four brothers were brought up by his father (an elementary school teacher, historian and artist of note) and mother (a drama teacher). He first developed an interest in writing in primary (elementary) school with gripping Viking stories inspired by history he was learning in school at the time!

After leaving school he got his degree from Dublin university and qualified as a primary school teacher, returning to work in Wexford. He married in 1991 and he and his wife spent about 4 years between 1992 and 1996 working in Saudi Arabia, Tunisia and Italy. His first book, Benny and Omar, was published in 1998, based on his experiences in Tunisia; it has since been translated into many languages. A sequel followed in 1999, followed by some other books (see below). Then in 2001 the first Artemis Fowl book was published and he was able to resign from teaching and concentrate fully on writing.

Since then, Artemis Fowl, which was named the public’s favourite Puffin Modern Classic of all time, has sold in excess of 25 million copies and has been translated into 40 languages. There are eight books in the series, alongside numerous companion books, limited edition releases, audiobooks and digital releases. In 2019, a brand new spin-off series called The Fowl Twins was released by Disney Books (US) and HaprerCollins (UK). This new trilogy features Artemis Fowl’s younger brothers Myles and Beckett Fowl and follows their own exciting adventures as they outsmart their opponents, make contact with the Fairy world and get themselves into all sorts of trouble. An Artemis Fowl Movie has been adapted by Walt Disney Studios and was released on Disney+ in May 2020 due cinema closures globally during the coronavirus pandemic. It was directed by Sir Kenneth Branagh and stars Ferdia Shaw (Artemis Fowl), Lara McDonnell (Holly Short), Josh Gad (Mulch Diggums), Nonso Anozie (Domovoi Butler), Dame Judy Dench (Commander Root), Colin Farrell (Artemis Fowl Sr.) and more.

In 2009, Eoin was commissioned by Douglas Adams’ estate to write And Another Thing, the concluding episode of the Hitchhiker’s Guide to the Galaxy series, which became a worldwide bestseller. Eoin also writes crime novels featuring Irish bouncer Daniel McEvoy. The third and final book in his WARP sci-fi series was released in summer 2015.

His latest work is Highfire (2020), a fantasy novel for adults. This is a high-octane adventure about a vodka-drinking, Flashdance-loving dragon who’s been hiding out from the world – and potential torch-carrying mobs – in a Louisiana bayou . . . until his peaceful world’s turned upside down by a well-intentioned but wild Cajun tearaway and the crooked (and heavily armed) law officer who wants him dead.

Upcoming releases include Deny All Charges, the second book in the Fowl Twins series (due Autumn 2020) and Global, the follow up to the Donkin and Rigano collaboration Illegal, which will tackle the topic of the climate crisis (due Autumn 2021).

Eoin was Ireland’s Children’s Laureate and still wears the medal at all times, even in the bath.