Author Stories Podcast Episode 1216 | J. A. Jance Returns With Nothing To Lose 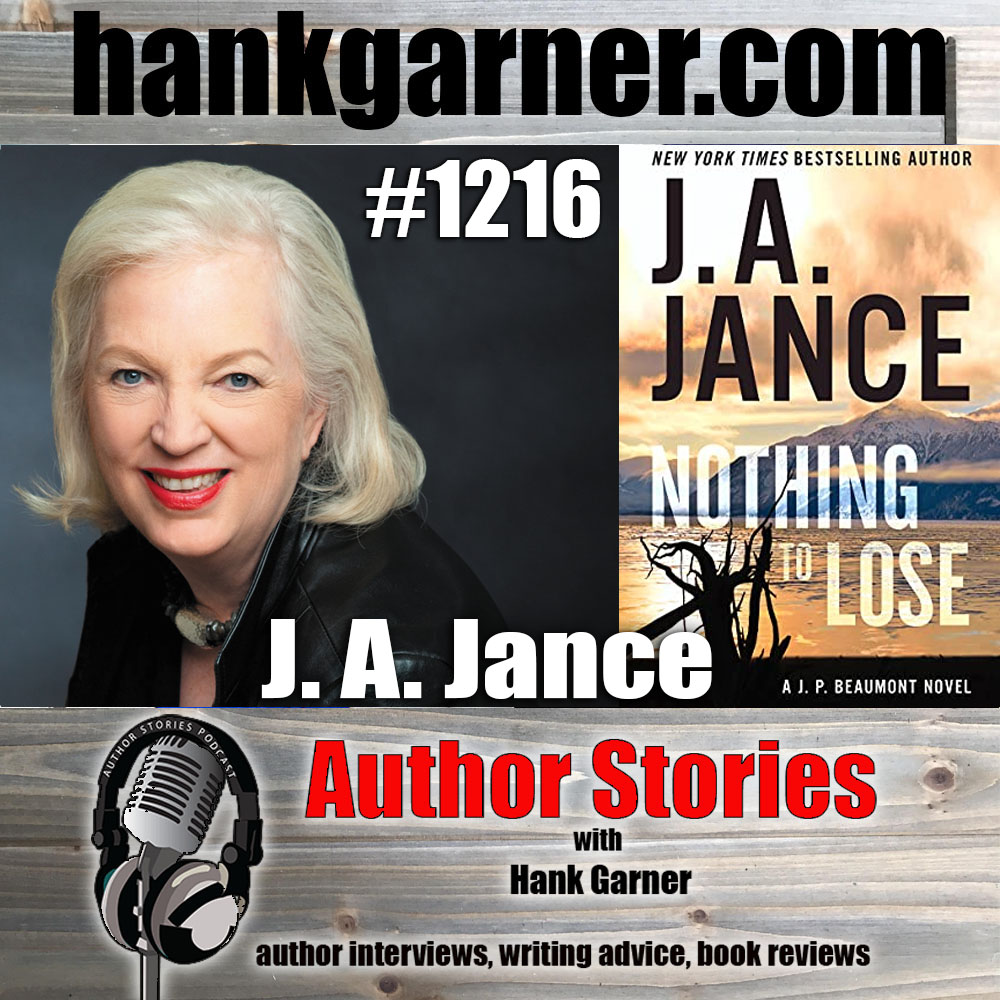 On today’s show J. A. Jance joins us again to talk about her new book Nothing To Lose.

The newest thrilling Beaumont suspense novel from New York Times bestselling author J. A. Jance, in which Beaumont is approached by a visitor from the past and finds himself drawn into a missing person’s case where danger is lurking and family secrets are exposed.

Years ago, when he was a homicide detective with the Seattle PD, J. P. Beaumont’s partner, Sue Danielson, was murdered. Volatile and angry, Danielson’s ex-husband came after her in her home and, with nowhere else to turn, Jared, Sue’s teenage son, frantically called Beau for help. As Beau rushed to the scene, he urged Jared to grab his younger brother and flee the house. In the end, Beaumont’s plea and Jared’s quick action saved the two boys from their father’s murderous rage.

Now, almost twenty years later, Jared reappears in Beau’s life seeking his help once again—his younger brother Chris is missing. Still haunted by the events of that tragic night, Beau doesn’t hesitate to take on the case. Following a lead all the way to the wilds of wintertime Alaska, he encounters a tangled web of family secrets in which a killer with nothing to lose is waiting to take another life.

About J. A. Jance

As a second-grader in Mrs. Spangler’s Greenway School class, I was introduced to Frank Baum’s Wizard of Oz series. I read the first one and was hooked and knew, from that moment on, that I wanted to be a writer.

The third child in a large family, I was four years younger than my next older sister and four years older than the next younger sibling. Being both too young and too old left me alone in a crowd and helped turn me into an introspective reader and a top student. When I graduated from Bisbee High School in 1962, I received an academic scholarship that made me the first person in my family to attend a four year college. I graduated in 1966 with a degree in English and Secondary Education. In 1970 I received my M. Ed. in Library Science. ﾠI taught high school English at Tucson’s Pueblo High School for two years and was a K-12 librarian at Indian Oasis School District in Sells, Arizona for five years.

My ambitions to become a writer were frustrated in college and later, first because the professor who taught creative writing at the University of Arizona in those days thought girls “ought to be teachers or nurses” rather than writers. After he refused me admission to the program, I did the next best thing: I married a man who was allowed in the program that was closed to me. My first husband imitated Faulkner and Hemingway primarily by drinking too much and writing too little. Despite the fact that he was allowed in the creative writing program, he never had anything published either prior to or after his death from chronic alcoholism at age forty-two. That didn’t keep him from telling me, however, that there would be only one writer in our family, and he was it.

My husband made that statement in 1968 after I had received a favorable letter from an editor in New York who was interested in publishing a children’s story I had written. Because I was a newly wed wife who was interested in staying married, I put my writing ambitions on hold. Other than writing poetry in the dark of night when my husband was asleep (see After the Fire), I did nothing more about writing fiction until eleven years later when I was a single, divorced mother with two children and no child support as well as a full time job selling life insurance. My first three books were written between four a.m. and seven a.m. At seven, I would wake my children and send them off to school. ﾠ After that, I would get myself ready to go sell life insurance.

I started writing in the middle of March of 1982. The first book I wrote, a slightly fictionalized version of a series of murders that happened in Tucson in 1970, was never published. For one thing, it was twelve hundred pages long. Since I was never allowed in the creative writing classes, no one had ever told me there were some things I needed to leave out. For another, the editors who turned it down said that the parts that were real were totally unbelievable, and the parts that were fiction were fine. ﾠMy agent finally sat me down and told me that she thought I was a better writer of fiction than I was of non-fiction. Why, she suggested, didn’t I try my hand at a novel?

The result of that conversation was the first Detective Beaumont book, Until Proven Guilty. Since 1985 when that was published, there have been 24 more Beau books. My work also includes 19 Joanna Brady books set in southeastern Arizona where I grew up, 115 Ali Reynolds books, set in Sedona, AZ, and five novellas.ﾠ In addition there are five thrillers, starting with Hour of the Hunter and Kiss of the Bees, that reflect what I learned during the years when I was teaching on the Tohono O’Odham reservation west of Tucson, Arizona.

The week before Until Proven Guilty was published, I did a poetry reading of After the Fire at a widowed retreat sponsored by a group called WICS (Widowed Information Consultation Services) of King County. By June of 1985, it was five years after my divorce in 1980 and two years after my former husband’s death. ﾠI went to the retreat feeling as though I hadn’t quite had my ticket punched and didn’t deserve to be there. After all, the other people there were all still married when their spouses died. I was divorced. At the retreat I met a man whose wife had died of breast cancer two years to the day and within a matter of minutes of the time my husband died. We struck up a conversation based on that coincidence. Six months later, to the dismay of our five children, we told the kids they weren’t the Brady Bunch, but they’d do, and we got married. We now have four new in-laws as well as six grandchildren.

When my second husband and I first married, he supported all of us–his kids and mine as well as the two of us. It was a long time before my income from writing was anything more than fun money–the Improbable Cause trip to Walt Disney World; the Minor in Possession memorial powder room; the Payment in Kind memorial hot tub. Eventually, however, the worm turned. My husband was able to retire at age 54 and took up golf and oil painting.

One of the wonderful things about being a writer is that everything–even the bad stuff–is usable. The eighteen years I spent while married to an alcoholic have helped shape the experience and character of Detective J. P. Beaumont. My experiences as a single parent have gone into the background for Joanna Brady–including her first tentative steps toward a new life after the devastation of losing her husband in Desert Heat. ﾠ And then there’s the evil creative writing professor in Hour of the Hunter and Kiss of the Bees, but that’s another story.

Another wonderful part of being a writer is hearing from fans. I learned on the reservation that the ancient, sacred charge of the storyteller is to beguile the time. I’m thrilled when I hear that someone has used my books to get through some particularly difficult illness either as a patient or as they sit on the sidelines while someone they love is terribly ill. It gratifies me to know that by immersing themselves in my stories, people are able to set their own lives aside and live and walk in someone else’s shoes. It tells me I’m doing a good job at the best job in the world.