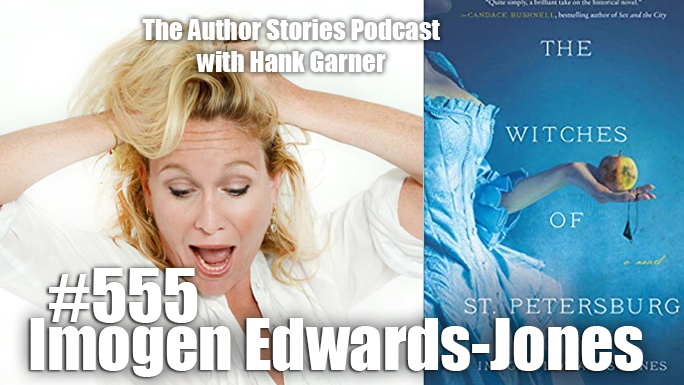 Today Imogen Edwards-Jones joins me to talk about her new book The Witches of St. Petersburg.

Inspired by real characters, this transporting historical fiction debut spins the fascinating story of two princesses in the Romanov court who practiced black magic, befriended the Tsarina, and invited Rasputin into their lives—forever changing the course of Russian history.

As daughters of the impoverished King of Montenegro, Militza and Stana must fulfill their duty to their father and leave their beloved home for St. Petersburg to be married into senior positions in the Romanov court. For their new alliances to the Russian nobility will help secure the future of the sisters’ native country. Immediately, Militza and Stana feel like outcasts as the aristocracy shuns them for their provincial ways and for dabbling in the occult. Undeterred, the sisters become resolved to make their mark by falling in with the lonely, depressed Tsarina Alexandra, who—as an Anglo-German—is also an outsider and is not fully accepted by members of the court. After numerous failed attempts to precipitate the birth of a son and heir, the Tsarina is desperate and decides to place her faith in the sisters’ expertise with black magic.

Promising the Tsarina that they will be able to secure an heir for the Russian dynasty, Militza and Stana hold séances and experiment with rituals and spells. Gurus, clairvoyants, holy fools, and charlatans all try their luck. The closer they become to the Tsarina and the royal family, the more their status—and power—is elevated. But when the sisters invoke a spiritual shaman, who goes by the name of Rasputin, the die is cast. For they have not only irrevocably sealed their own fates—but also that of Russia itself.

Brimming with black magic, sex and intrigue, The Witches of St. Petersburg is an exquisite historical fiction debut novel filled with lush historical details from the Romanov era.

Imogen Edwards-Jones is the author of some 20 books including the well-received travel book – The Taming of Eagles – about the first 100 days of the collapse of Communism, (after which she went on to present the BBC Radio 4 documentary– Bucks in the USSR). Her novels include My Canapé Hell, Shagpile, The Wendy House and Tuscany for Beginners. She has co-edited Big Night Out (the celebrity collection of short stories with contributions from Kate Moss to Bob Geldof, in aid of the War Child charity) and In Bed With a collection of erotic short stories with contributions from Fay Weldon and Esther Freud. She has also ghosted various memoirs for TV personalities.

She was responsible for the hugely successful Babylon series, which includes the Sunday Times best sellers Hotel Babylon, Air Babylon, Fashion Babylon, Beach Babylon and Pop Babylon. The series has sold over 1 million copies in the UK alone, been translated into some twenty different languages worldwide and made into two BBC Primetime TV shows.