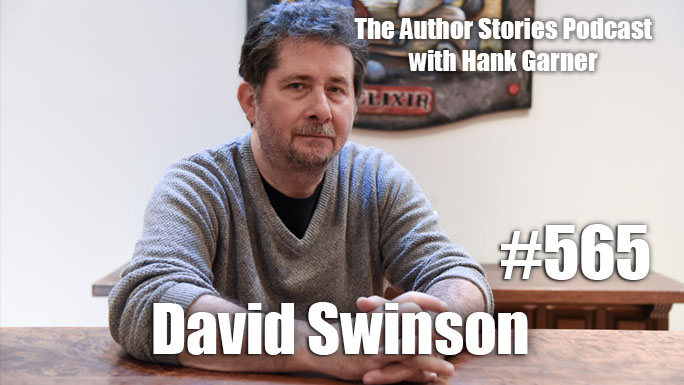 David Swinson stops by the show today to talk about his incredible journey to becoming one of the best crime fiction writers, making stops along the way in the 80’s punk scene, spending time with Timothy Leary and Hunter S. Thompson, to becoming a Washington DC cop, and now to an author who’s writing the complicated, compelling stories including his latest release Trigger.

In the latest novel from David Swinson, “one of the best dialogue hounds in the business” (New York Times Book Review), Frank Marr, a good cop with a bad habit, must choose between justice and loyalty to an old friend.

Frank Marr was a good cop, until his burgeoning addictions to alcohol and cocaine forced him into retirement from the D.C. Metro police. Now, he’s barely eking out a living as a private investigator for a defense attorney–also Frank’s ex-girlfriend.

Ostracized by his family after a botched case that led to the death of his baby cousin, Jeffrey, Frank was on a collision course with rock bottom. Now clean and clinging hard to sobriety, Frank passes the time–and tests himself–by robbing the houses of local dealers, taking their cash and flushing their drugs down the toilet. When an old friend from his police days needs Frank’s help to prove he didn’t shoot an unarmed civilian, Frank is drawn back into the world of dirty cops and suspicious drug busts, running in the same circles that enabled his addiction those years ago.
Never one to play by the rules, Frank recruits a young man he nearly executed years before. Together–a good man trying not to go bad and a bad man trying to do good–detective and criminal charge headfirst into the D.C. drug wars. Neither may make it out.

In 1994, Swinson returned to his home base of Washington DC, where he joined the Metropolitan Police Department. Swinson began his career as a police officer in uniform. He was then assigned to the Gun Recovery Unit as a tactical officer. Shortly after that, Swinson was assigned as a plainclothes/undercover officer, targeting narcotics and crimes in progress. In 1998, Swinson was assigned to the Third District Detectives Office as an investigator, where he covered offenses ranging from burglary and armed robbery to homicide. In 2000, he was promoted to detective and was eventually assigned to the department’s Special Investigations Bureau/Major Crimes, and was the lead investigator in the District of Columbia for investigating serial burglaries, high profile cases and organized criminal operations related to narco-fencing.

After retiring from the police department, Swinson began writing crime fiction. A Detailed Man came out in 2011 followed up with The Second Girl, the first book of his Frank Marr trilogy.