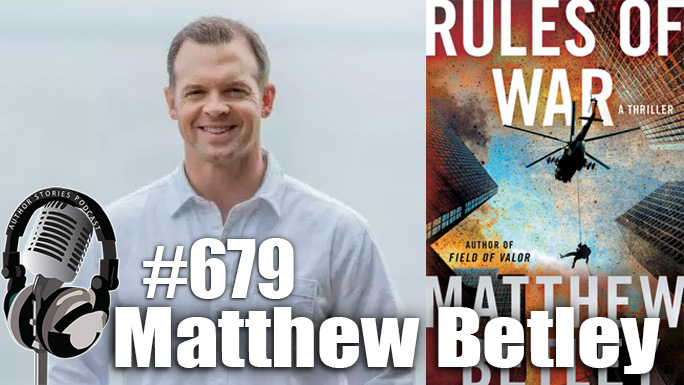 Today my guest is Matthew Betley who returns to the show to talk all about Logan West and his new thriller Rules Of War.

Following the events of the “fast, hard-hitting, and impossible to put down” (The Real Book Spy) Field of Valor, Logan West continues his mission to bring America’s traitorous vice president to justice, even as the clandestine group pulling all the strings makes one last deadly bid to regain their power.

The vice president of the United States is missing, the director of the National Security Agency has been assassinated, and the mysterious organization orchestrating global instability is in tatters. While John Quick recovers from a gunshot wound that nearly killed him, Logan West is on the hunt to bring the vice president back to the US to face justice for his treason. The final stakes have never been higher and Logan and his task force are left with little to no options. Will it be this warrior’s end?

LISTEN TO MATTHEW’S FIRST VISIT TO THE SHOW

Matthew Betley grew up in Cincinnati, Ohio, which he considers home after his family moved there from New Jersey, where he was born and which also explains his affinity for the New York Yankees.  He attended St. Xavier High School and then Miami University in Oxford, Ohio, where he graduated with a B.A. in psychology and minors in political science and sociology.  He also spent the first semester of senior year investigating felony murder cases as an intern investigator in Washington, D.C., for the Public Defender’s Office, a formative experience that provided countless stories that could fill the pages of a non-fiction book.  Upon graduation, he worked in corporate America for five years in Cincinnati before joining the Marine Corps in 1999.

Matt spent ten years as a Marine officer and was trained as a scout sniper platoon commander, an infantry officer, and a ground intelligence officer.  His experiences include deployments to Djibouti after 9/11, and Fallujah, Iraq, prior to the surge, both in staff officer support billets, although he learned that enemy rocket and mortar fire don’t discriminate between billet types.

As the author of the Logan West thriller series, Matt’s first book, OVERWATCH, was nominated in 2016 for a Barry Award for Best Overall Thriller and was also named a Top Ten Book of 2016 by the Military Times.  His second and third novels, OATH OF HONOR and FIELD OF VALOR, have received similar critical acclaim, with RULES OF WAR coming out 16 July 2019.  RULES has also been picked by Dana Perino at Fox News as the Dana Perino Book Club Selection for Fox Nation.

Finally, and most importantly, Matt is a recovering alcoholic with more than ten years of sobriety.  He credits the Marine Corps with providing a foundation in discipline and personal accountability for his desire to initially seek help.  Matt is open and direct about it and has spoken in front of large groups of people with one clear message – if he can get sober, so can anyone.  His recovery and sobriety provide the authenticity for Logan West’s struggle with his inner demons.