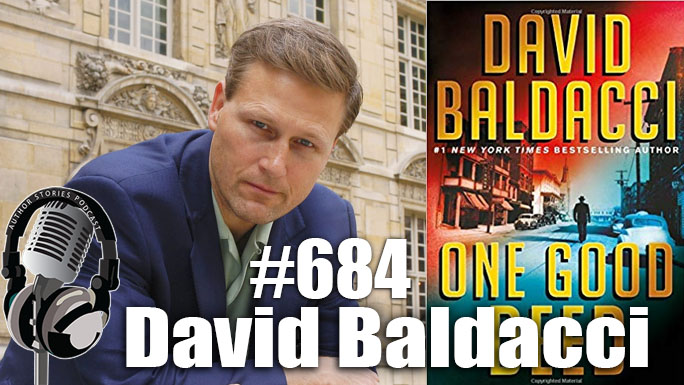 On today’s show David Baldacci returns to Author Stories to talk about his brand new book One Good Deed.

Listen to David’s previous visits to the show:

It’s 1949. When war veteran Aloysius Archer is released from Carderock Prison, he is sent to Poca City on parole with a short list of do‘s and a much longer list of don’ts: do report regularly to his parole officer, don’t go to bars, certainly don’t drink alcohol, do get a job–and don’t ever associate with loose women.

The small town quickly proves more complicated and dangerous than Archer’s years serving in the war or his time in jail. Within a single night, his search for gainful employment–and a stiff drink–leads him to a local bar, where he is hired for what seems like a simple job: to collect a debt owed to a powerful local businessman, Hank Pittleman.

Soon Archer discovers that recovering the debt won’t be so easy. The indebted man has a furious grudge against Hank and refuses to pay; Hank’s clever mistress has her own designs on Archer; and both Hank and Archer’s stern parole officer, Miss Crabtree, are keeping a sharp eye on him.

When a murder takes place right under Archer’s nose, police suspicions rise against the ex-convict, and Archer realizes that the crime could send him right back to prison . . . if he doesn’t use every skill in his arsenal to track down the real killer.

DAVID BALDACCI is a global #1 bestselling author, and one of the world’s favorite storytellers. His books are published in over 45 languages and in more than 80 countries, with over 130 million worldwide sales. His works have been adapted for both feature film and television. David Baldacci is also the cofounder, along with his wife, of the Wish You Well Foundation, a nonprofit organization dedicated to supporting literacy efforts across America. Still a resident of his native Virginia, he invites you to visit him at DavidBaldacci.com and his foundation at WishYouWellFoundation.org.