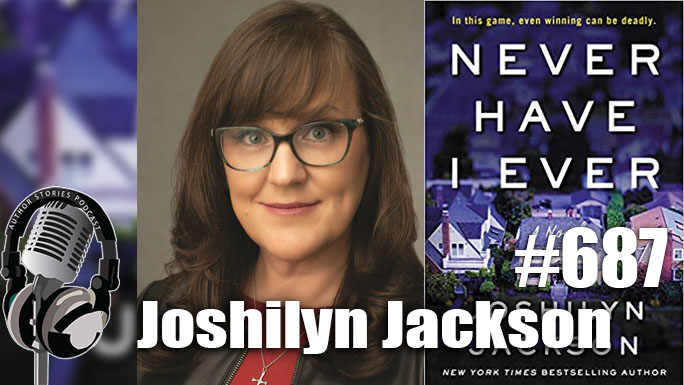 Today’s author interview guest is Joshilyn Jackson, author of Never Have I Ever.

From New York Times bestselling author Joshilyn Jackson, a twisting novel of domestic suspense in which a group of women play a harmless drinking game that escalates into a war of dark pasts

In this game, even winning can be deadly…

Amy Whey is proud of her ordinary life and the simple pleasures that come with it—teaching diving lessons, baking cookies for new neighbors, helping her best friend, Charlotte, run their local book club. Her greatest joy is her family: her devoted professor husband, her spirited fifteen-year-old stepdaughter, her adorable infant son. And, of course, the steadfast and supportive Charlotte. But Amy’s sweet, uncomplicated life begins to unravel when the mysterious and alluring Angelica Roux arrives on her doorstep one book club night.

Sultry and magnetic, Roux beguiles the group with her feral charm. She keeps the wine flowing and lures them into a game of spilling secrets. Everyone thinks it’s naughty, harmless fun. Only Amy knows better. Something wicked has come her way—a she-devil in a pricey red sports car who seems to know the terrible truth about who she is and what she once did.

When they’re alone, Roux tells her that if she doesn’t give her what she asks for, what she deserves, she’s going to make Amy pay for her sins. One way or another.

To protect herself and her family and save the life she’s built, Amy must beat the devil at her own clever game, matching wits with Roux in an escalating war of hidden pasts and unearthed secrets. Amy knows the consequences if she can’t beat Roux. What terrifies her is everything she could lose if she wins.

A diabolically entertaining tale of betrayal, deception, temptation, and love filled with dark twists leavened by Joshilyn Jackson’s trademark humor, Never Have I Ever explores what happens when the transgressions of our past come back with a vengeance.

New York Times and USA Today bestselling novelist Joshilyn Jackson’s newest book, Never Have I Ever, will launch in July of 2019. You can check out her previous eight novels and other work here. Joshilyn’s books have been translated into a dozen languages, have won SIBA’s Novel of the Year award, have three times been #1 Book Sense Pick, have twice won Georgia Author of the Year awards, have three times been shortlisted for the Townsend Prize for Fiction, and have been a finalist for the Willie Morris Award for Southern Fiction.

A former actor, Jackson reads the audio versions of both her own novels and the books of other writers; her work in this field has been nominated for the Audie Award, was selected by AudioFile Magazine for their best of the year list, won three Earphones awards, made the 2012 Audible All-Star list for highest listener ranks/reviews, and garnered three Listen Up awards from Publisher’s Weekly.

She serves on the board of Reforming Arts, a nonprofit that runs education-in-prison and reentry programs. Reforming Arts fosters the development of critical and creative thinking skills, encouraging students to build livable lives both during and post-incarceration. Through this organization, Joshilyn has taught creative writing, composition, and literature inside Georgia’s maximum security facility for women.

Joshilyn learned to scuba-dive in order to write Never Have I Ever, and now she and her husband Scott are both avid divers. They live in Decatur, Georgia with their two kids, two entitled cats, and a modestly-sized dog.