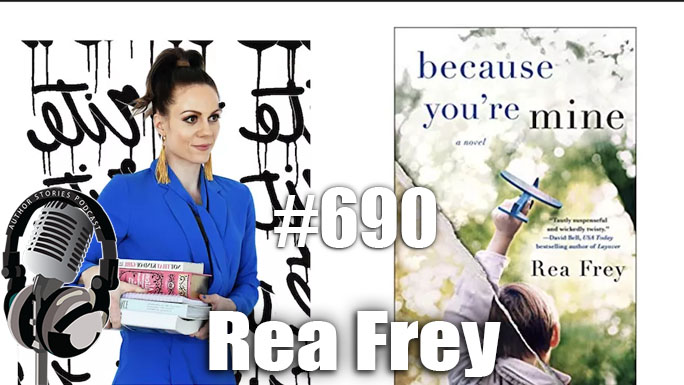 Today’s author interview guest is Rea Frey, author of Because You’re Mine.

An “insidious, suspenseful tale” (J.T. Ellison) with a “shocker of an ending you won’t see coming” (Michele Campbell), Because You’re Mine by Rea Frey, the author who “brings to mind Jodi Picoult” (Booklist) and “will appeal to readers of Greer Hendricks and Sarah Pekkanen” (Sally Hepworth)is a novel about how the truth will set you free.

But it’s the lies that keep you safe.

Single mother Lee has the daily routine down to a science: shower in six minutes. Cut food into perfect squares. Never leave her on-the-spectrum son Mason in someone else’s care. She’ll do anything—anything—to keep his carefully constructed world from falling apart. Do anything to keep him safe.

But when her best friend Grace convinces her she needs a small break from motherhood to recharge her batteries, Lee gives in to a weekend trip. Surely a long weekend away from home won’t hurt?

Noah, Mason’s handsome, bright, charismatic tutor—the first man in ages Lee’s even noticed—is more than happy to stay with him.

Forty-eight hours later, someone is dead.

But not all is as it seems. Noah may be more than who he claims to be. Grace has a secret—one that will destroy Lee. Lee has secrets of her own that she will do anything to keep hidden. And what will happen to Mason, as the dominoes begin to fall and the past comes to light?

Perhaps it’s no mystery someone is gone after all…

Because You’re Mine is a breathtaking novel of domestic drama and suspense.

Prepare to stay up all night.

Rea Frey is an award-winning author of four nonfiction books. She lives in Nashville with her husband and daughter. Her debut novel, NOT HER DAUGHTER, was released 8.21.18 and has been optioned for film. Her new novel, BECAUSE YOU’RE MINE, will be published 8.6.19. Read more at reafrey.com.
[embedyt] https://www.youtube.com/watch?v=k9s5h-PP9HI[/embedyt]