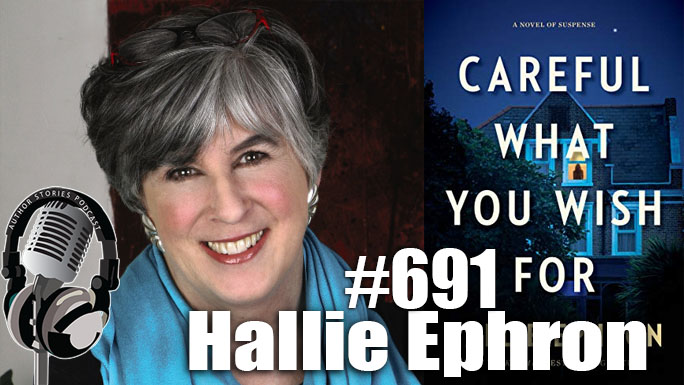 Today’s author interview guest is Hallie Ephron, author of the brand new thriller Careful What You Wish For.

From the New York Times bestselling author of There Was an Old Woman comes a novel about a professional organizer with a deadly problem she may not be able to clean up.

Emily Harlow is a professional organizer who helps people declutter their lives; she’s married to man who can’t drive past a yard sale without stopping. He’s filled their basement, attic, and garage with his finds.

Like other professionals who make a living decluttering peoples’ lives, Emily has devised a set of ironclad rules. When working with couples, she makes clear that the client is only allowed to declutter his or her own stuff. That stipulation has kept Emily’s own marriage together these past few years. She’d love nothing better than to toss out all her husband’s crap. He says he’s a collector. Emily knows better—he’s a hoarder. The larger his “collection” becomes, the deeper the distance grows between Emily and the man she married.

Luckily, Emily’s got two new clients to distract herself: an elderly widow whose husband left behind a storage unit she didn’t know existed, and a young wife whose husband won’t allow her stuff into their house. Emily’s initial meeting with the young wife takes a detour when, after too much wine, the women end up fantasizing about how much more pleasant life would be without their collecting spouses.

But the next day Emily finds herself in a mess that might be too big for her to clean up. Careful what you wish for, the old adage says . . . now Emily might lose her freedom, her marriage . . . and possibly her life.

Her forthcoming suspense novel, Careful What You Wish For (August, 2019), was inspired by the Marie Kondo life-changing decluttering tips. It explores the relationships built by professional organizers and their clients—showing just how easily the lines between professional and personal can be blurred. In it, Emily Harlow is a professional organizer who helps people declutter their lives; she’s married to man who can’t drive past a yard sale without stopping. Sometimes she find herself wondering if he sparks joy. In a starred review, Publisher’s Weekly called it “outstanding.”

Her You’ll Never Know, Dear (June, 2017, Wm. Morrow) is set in South Carolina. It tells the story of a little girl’s disappearance and the porcelain doll that may hold the key to her fate. It was named a finalist for the Mary Higgins Clark Award, an Earphones Award winner, and one of the “Top 10 Mystery and Suspense” audiobooks of 2017 by Audiofile.

In Night Night, Sleep Tight, Hallie takes her experiences growing up in Beverly Hills in a family of writers and weaves them into a suspense novel with echoes of a scandalous true crime. The novel was InStyle Magazine’s #1 “Page-turning Pick.” In a starred review, Publisher’s Weekly said, “Old Hollywood glamour, scandals, and lies infuse this captivating thriller.” Good Housekeeping (as “addictive” as Gone Girl) picked it as its top page turner for April. Bookreporter reviewer called it, “An extremely impressive work. The plotting and character development read as if they could have been transplanted from an unpublished Raymond Chandler novel.

Her first suspense standalone was Never Tell a Lie (Wm. Morrow, 2009). In a starred review, Publishers Weekly called it “stunning” and a “deliciously creepy tale of obsession.” USA Today: “You can imagine Hitchcock curling up with this one.” It was adapted for film as “And Baby Will Fall” for the Lifetime Movie Network.

She followed up with Come and Find Me, the story of a reclusive former hacker who thinks she’s found safety on the Internet. When her sister disappears she has to brave the real world. Mystery Scene called it “Psychologically astute and emotionally gripping. ”

Set in the Bronx with a view of the Empire State Building, her next novel, There Was an Old Woman,tells a story of trust and betrayal, deception and madness. In it, a young woman and a very old woman connect across generations in spite of, or perhaps because, they are not related. It garnered rave reviews. Washington Post book reviewer Maureen Corrigan: “For those who love Gotham and abhor gore, There Was an Old Woman is the perfect thriller lite.” New York Times bestselling author Tess Gerritsen calls it “an absolute must read. I devoured this in one ravenous gulp.”

Hallie teaches writing at workshops and writing conferences across the country and abroad. A REVISED AND EXPANDED EDITION of her Writing and Selling Your Mystery Novel (Writers Digest Books), is widely available. It was nominated for Edgar and Anthony awards. Lee Child called it “the best how-to guide I have ever seen — I just wish I could have read it twenty years ago.”

An award-winning crime fiction book reviewer, Hallie wrote an ON CRIME column for the Boston Globe for more than ten years.