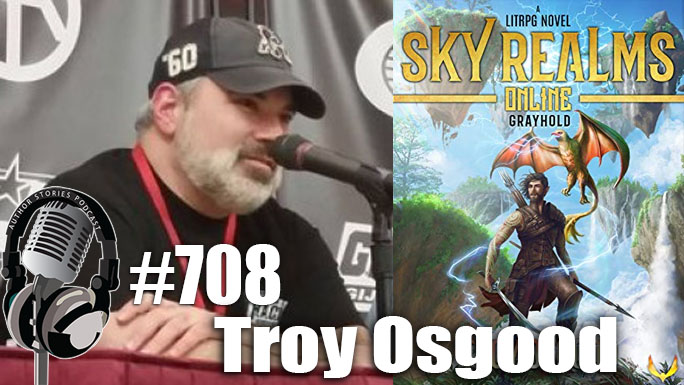 Today’s author interview guest is Troy Osgood, author of the new LITRPG novel Sky Realms Online: Grayhold. At the beginning of the show I have a chat with Aethon Books co-founder Steve Beauleau and we talk for a few minutes about what Aethon is doing to bring quality sci-fi and fantasy to market while building a home for some of the best up and coming authors in the genre. Right before the interview we have a special audiobook clip from Sky Realms Online: Grayhold.

Trapped in the game. Forced back to level 1. What’s next, permadeath?

Sky Realms Online is the largest and most popular Virtual Reality MMORPG ever made. Set amongst the mystical, floating islands of Hankarth, it’s played and enjoyed by millions every hour. Until something goes wrong.

Unable to log out, players find themselves reduced to level one, and in the starting zones. They receive a cryptic message from the developers stating that for unknown reasons, they are trapped in the game and may have to live out their lives within the virtual world.

Hall is one of the those trapped in the game. He’s been playing Sky Realms Online as a spear-wielding Skirmisher ever since the beta. And instead of panicking as many do, he decides to make the most of it; to play the game and live his new life, all while quietly hoping the developers will find a fix.

It doesn’t take Hall long to find out that, while some aspects of the game are the same, the difficulty level is beyond anything he’s ever experienced.

Together, with a new party of trapped players and NPCs with canned answers, Hall will find out just how different Sky Realms Online has become, and how playing a game is different from living the game…

Born and raised in the granite state of New Hampshire, Troy is a lifelong and avid reader of comic books and novels (mostly in the fantasy, sci-fi and adventure/thriller genres). The ongoing serial storytelling methods of comic books and television has always fascinated him and provided inspiration for his writing. He’s always had a love of creating and world building and dreams of someday seeing his creations expressed across all media: books, comic books, movies, TV and even toys.

When not writing, Troy can be found outside hiking, kayaking or out back at the bonfire with beer in hand. Don’t expect to bother him during football season, especially when the Patriots are playing.

He still lives in New Hampshire.