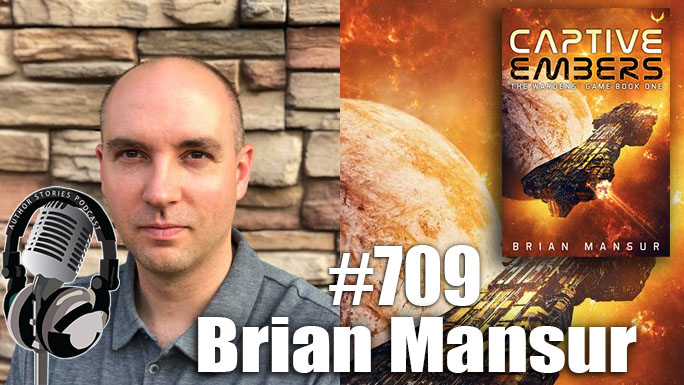 Today’s author interview guest is Brian Mansur, author of Captive Embers: An Intergalactic Military Sci-Fi Adventure. At the beginning of the show I have a chat with Aethon Books co-founder Steve Beauleau and we talk for a few minutes about what Aethon is doing to bring quality sci-fi and fantasy to market while building a home for some of the best up and coming authors in the genre. Right before the interview we have a special audiobook clip from Captive Embers.

Humanity wages war across space. But a bigger game is at play.

The real enemy is out there. Watching. Waiting.

Mykonian fleet Operative Rafe Hastings has spent several tours around Belia trying to keep weapons traffickers from tearing the local space habitats apart. He’s eager to go home when an informant passes him dire news about an infamous cartel boss named Lilith. Not only has she acquired nuclear weapons, but she has somehow gained permission from the mysterious robotic overlords of inhabited space – the Wardens – to use them.

The battleship Tsunami is dispatched to investigate Rafe’s discovery and veteran operations Officer Sean Merrick soon finds himself caught in a conspiracy involving feuding Wardens. With allies dying all around him, his only hope for survival turns out to be a junior combat nurse named Sarah Riley who has scarcely fired a gun before.

As Rafe, Sean, and Sarah battle Lilith, they’ll be forced to rely on the unexpected to save the people they love. But with the Wardens constantly changing the rules, could it be that no matter who wins the war, everyone loses?

Brian Mansur is a nerdy sci-fi geek who resides in the enchanted plains of Iowa with a beautiful Ecuadorian princess, their handsome son and assorted puppy dogs. When not living the glamorous life of a top-tier customer service agent, he enjoys plotting the destruction of America’s enemies as an Army National Guard officer.