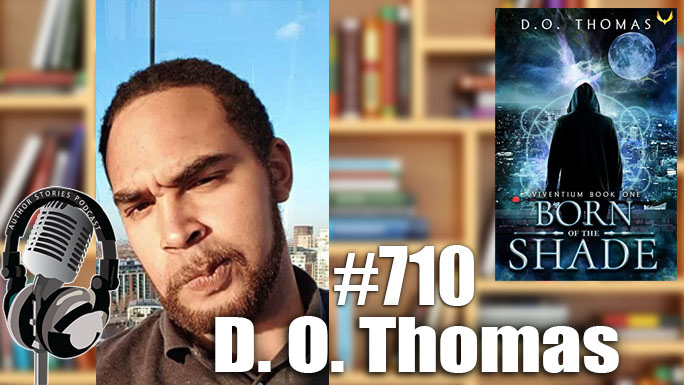 Today’s show is another Aethon Books Showcase show with guest D. O. Thomas talking about his new book Born of the Shade. After the interview we have an audio book clip from The Call Of Agon by Dean F. Wilson.

They live among us. Hiding in plain sight. Until Now…

West London has always been known as the quieter part of the city. That’s true… for a human. But in reality, the streets are home to those that rule over the supernatural world.

Werewolves have their gated communities. Vampires reside within a subterranean utopia. And the magic-wielding wizards, witches, and warlocks study their arts right under the noses of general public. It has always been that way, and because of this, there has always been peace.

But when a rare blue moon settles in the sky, everything changes.

Noir, a West London information broker with his fingers in every supernatural pie, sets out to discover what the blue moon means and finds something beyond belief. With his discovery, comes the realization of a prophecy that spells disaster for the supernatural world.

He must do everything in his power to stop the actualization of this dark future that might mean the end for the peace between species that keeps his world intact.

Magic, secrets, and unexpected twists will keep you on the edge of your seat in this Supernatural Urban Fantasy debut. It’s perfect for fans of Rivers of London, The Magicians, and American Gods.

D o Thomas is from the uk, born and raised in west London. As a child he struggled in school due to Dyspraxia, a learning difficulty that effects hand eye coordination. He learned to read before he could pick up a pen and soon fell in love with the Discworld series by Terry Pratchett.

Fantasy played a major role in his life as he struggled to do the things his friends could do. Instead of playing football he journeyed through the streets of Ankh-Morpork. Instead of riding a bike he imagined being a great and powerful wizard and soon his dreams came true when he received his first Japanese role-playing game on the PlayStation. The computer games that came next had deep and dark stories which fascinated him and lead him to imagine his own stories.

Years flew by, school felt impossible as he still hadn’t learned to put pen to paper, he stopped reading, gave up on learning and even his teachers allowed him to ignore the work they put in front of him. Instead, he jotted down poems in handwriting only he could read. Naturally D o Thomas received terrible grades for his GCSE’s; he didn’t even sit his literature exam however he never lost that need for a good story.

Fast forward into early adult life, after the failed attempt to be a UK rapper and after meeting the meeting the love of his life, he made the discovery of audible. Books were back and they were easy again. He fell in love with so many new stories and started writing his own. It took him five years of tweaking his writing style, analysing his shortcomings and obsessing over the world he wanted to create but he did it.

Drawing his inspiration from the likes of Terry Pratchett, George RR Martin, RR Haywood, Devon C Ford and the stupendous amount of authors this bio hasn’t the room to mention, D o Thomas taught himself how to be an author and now brings you the Viventuim series.

Every book, every sentence, every word a piece of his soul.