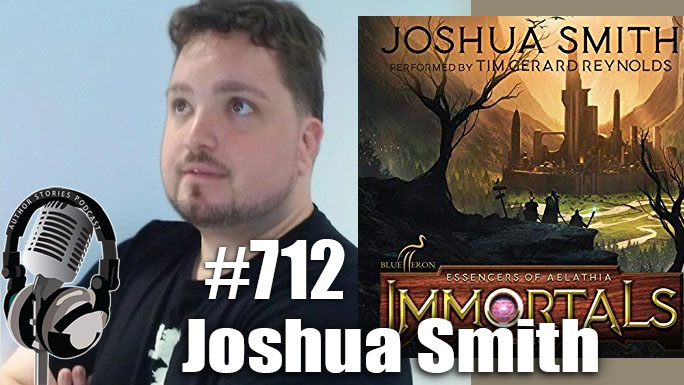 Joshua Smith has an amazing story of personal triumph and a fantastic new fantasy series that is just about to launch. Listen to us talk all about fantasy and how his new series, including his new book Immortals, came to be.

The world has been destroyed…

…and remolded in the image of its destroyer.

For thousands of years, stories had been told of the terrible Sorceress who’d given all her power to end the ancient world. But those were just stories. Now, new stars dot the sky—signs of Sorceress Jocina’s power returning so she can finish the job.

For A’banna, these signs mark the end of her service to the Sorceress as priestess. Commanded to sacrifice a living being in Jocina’s name, she can’t go through with it. A’banna flees into the jungle, but the wide world is much different than she knows. Further, she’s being hunted by Jocina’s sadistic son and her monstrous creations. Nature itself seems set against her.

Bedel and Raynt, two of the Magical Affairs Commission’s elite agents and powerful essencers, might be her only hope. They’ve dedicated their lives to holding back the tide of Jocina’s darkness, and preventing her inevitable return, but when they discover A’banna on the edge of death, all missions are postponed in an effort to protect her.

Might this strange, defecting priestess hold the keys to defeating the Sorceress once and for all? Or will she cause two of the most powerful remaining essencers to meet their doom for nothing?

Experience the start of a Fantasy Epic filled with magic, war, and characters that leap off the pages. It’s perfect for fans of Jeff Wheeler, Brandon Sanderson, and AC Cobble.

Joshua P. Smith fell in love with fantasy and science fiction early in life, but attempted a normal career first. He is a former Language Arts educator, lawyer’s assistant, college ministry interim director, and most recently volunteered in politics. He has a background in communications, journalism, and academic forensics (which sounds more sophisticated on résumés than speech and debate). He loves running, dancing, hiking, camping, medieval martial arts, gaming, anything geek, and long walks on the beach. After six years of battling Parkinson’s Syndrome and a form of epilepsy caused by two Machiavellian super-villains (a.k.a. viruses), it was clear Joshua needed a quest beyond the ongoing war with his viral opponents. What better way to capture the magic of life than write? Now seizure free, he can be found coffee shop-hopping in the Dallas-Fort Worth area, where he lives with his family and their collective imaginations.