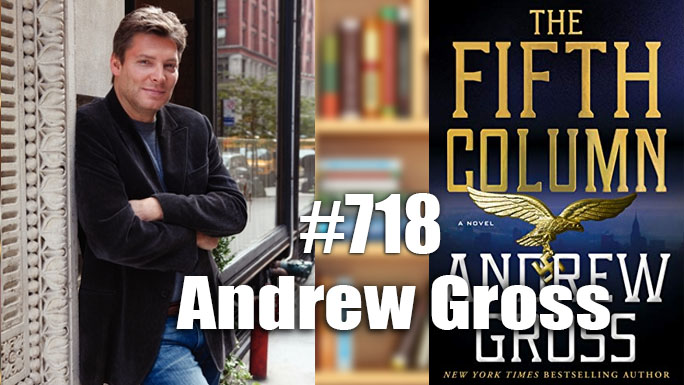 Andrew Gross joins me today to talk about his new historical thriller The Fifth Column.

“One of the best historical thriller authors in the business… [A] stellar novel.” —Associated Press

#1 New York Times bestselling author of The One Man Andrew Gross once again delivers a tense, stirring thriller of a family torn apart set against the backdrop of a nation plunged into war.

February, 1939. Europe teeters on the brink of war. In New York City, twenty-two thousand cheering Nazi supporters pack Madison Square Garden for a raucous, hate-filled rally. In a Hell’s Kitchen bar, Charles Mossman is reeling from the loss of his job and the demise of his marriage when a group draped in Nazi flags barges in. Drunk, Charlie takes a swing at one with tragic results and a torrent of unintended consequences follows.

Two years later. America is wrestling with whether to enter the growing war. Charles’s estranged wife and six-year-old daughter, Emma, now live in a quiet brownstone in the German-speaking New York City neighborhood of Yorkville, where support for Hitler is common. Charles, just out of prison, struggles to put his life back together, while across the hall from his family, a kindly Swiss couple, Trudi and Willi Bauer, have taken a liking to Emma. But Charles begins to suspect that they might not be who they say they are.

As the threat of war grows, and fears of a “fifth column”—German spies embedded into everyday life—are everywhere, Charles puts together that the seemingly amiable Bauers may be part of a sinister conspiracy. When Pearl Harbor is attacked and America can no longer sit on the sideline, that conspiracy turns into a deadly threat with Charles the only one who can see it and Emma, an innocent pawn.

Andrew Gross is the author of the New York Times and international bestsellers Everything to Lose, No Way Back, 15 Seconds, Eyes Wide Open, Reckless, Don’t Look Back, The Dark Tide, and The Blue Zone. He is also coauthor of five number one bestsellers with James Patterson, including Judge & Jury and Lifeguard. His books have been translated into more than twenty-five languages. His latest novel, Button Man, is an historical thriller coming Sept 18, 2018 from Minotaur Books.