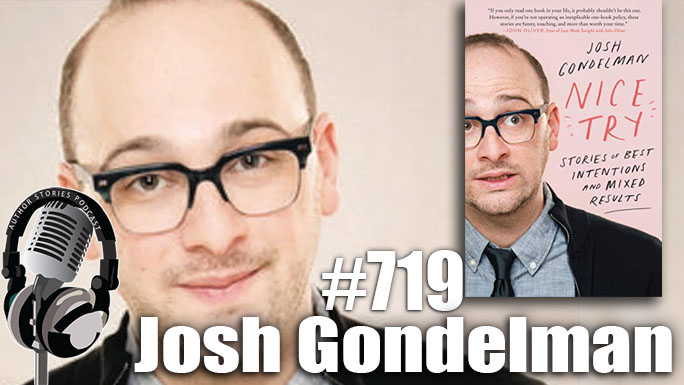 Today my guest is Josh Gondelman, stand up comic, television writer and the author of the new book Nice Try: Stories of Best Intentions and Mixed Results.

Josh Gondelman knows a thing or two about trying—and failing. The Emmy Award-winning stand-up comic—dubbed a “pathological sweetheart” by the New York Observer—is known throughout the industry as one of comedy’s true “nice guys.” Not surprisingly, he’s endured his share of last-place finishes. But he keeps on bouncing back.

In this collection of hilarious and poignant essays (including his acclaimed New York Times piece “What if I Bombed at My Own Wedding?”), Josh celebrates a life of good intentions—and mixed results. His true tales of romantic calamities, professional misfortunes, and eventual triumphs reinforce the notion: we get out of the world what we put into it. Whether he’s adopting a dog from a suspicious stranger, mitigating a disastrous road trip, or trying MDMA for the first (and only) time, Josh only wants the best for everyone—even as his attempts to do the right thing occasionally implode.

Full of the warm and relatable humor that’s made him a favorite on the comedy club circuit, Nice Trysolidifies Josh Gondelman’s reputation as not just a good guy, but a skilled observer of the human condition.

Josh Gondelman is a writer and comedian who incubated in Boston before moving to New York City, where he currently lives and works as a writer and producer for Desus and Mero on Showtime. Previously, he spent five years at Last Week Tonight with John Oliver, first as a web producer and then as a staff writer. Onstage, Josh charms audiences using his good-natured storytelling and cracks them up with his sharp, pointy wit. He takes topics from surprise parties to his experience teaching preschool and makes them all equally hilarious. In 2016, he made his late night standup debut on Conan (TBS), and he recently made his network tv debut on Late Night With Seth Meyers (NBC). Josh’s upcoming album Dancing On a Weeknight is available April 19th on Blonde Medicine Records. (His last comedy album Physical Whisper debuted in March of 2016 at #1 on the iTunes comedy charts (as well as #4 on the Billboard comedy chart)  and stayed there for…well…longer than he expected, honestly.)

Offstage, Josh has earned two Peabody Awards, three Emmy awards, and two WGA Awards for his work on Last Week Tonight. He is also the co-author (along with Joe Berkowitz) of the book You Blew It, published October 2015 by Plume. His follow-up, Nice Try, is set to come out Fall 2019 through Harper Perennial. In the past, Josh has written for Fuse TV’s Billy On The Street. His writing has also appeared in prestigious publications such as McSweeney’s Internet Tendency, New York Magazine, and The New Yorker.

Gondelman is the co-creator and co-author of the Shorty Award-winning  Modern Seinfeld Twitter account, and his own Twitter feed was named the year’s best by Paste Magazine in 2015. The Ellen DeGeneres Show took notice of Josh’s joke writing skill and featured him as part of their “Tweetly Roundup.”