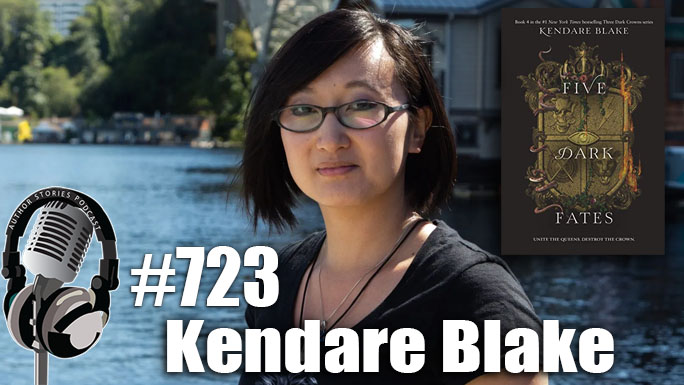 Kendare Blake returns to the show today to talk about Five Dark Fates, the epic conclusion of The Three Dark Crowns Series.

In the final book in the #1 New York Times bestselling Three Dark Crowns series, an all-out war is brewing—one that will pit sister against sister and dead against undead.

After the grim confrontation with Queen Katharine, the rebellion lies in tatters. Jules’s legion curse has been unbound, and it is up to Arsinoe to find a cure, even as the responsibility of stopping the ravaging mist lies heavy on her shoulders, and her shoulders alone. Mirabella has disappeared.

Katharine’s reign remains intact—for now. When Mirabella arrives, seemingly under a banner of truce, Katharine begins to yearn for the closeness that Mirabella and Arsinoe share. But as the two circle each other, the dead queens hiss caution—Mirabella is not to be trusted.

In this conclusion to the Three Dark Crowns series, three sisters will rise to fight as the secrets of Fennbirn’s history are laid bare. Allegiances will shift. Bonds will be tested. But the fate of the island lies in the hands of its queens. It always has.

Kendare Blake is the author of several novels and short stories, most of which you can find information about via the links above. Her work is sort of dark, always violent, and features passages describing food from when she writes while hungry. She was born in July (for those of you doing book reports) in Seoul, South Korea, but doesn’t speak a lick of Korean, as she was packed off at a very early age to her adoptive parents in the United States. That might be just an excuse, though, as she is pretty bad at learning foreign languages. She enjoys the work of Milan Kundera, Caitlin R Kiernan, Bret Easton Ellis, and Richard Linklater.