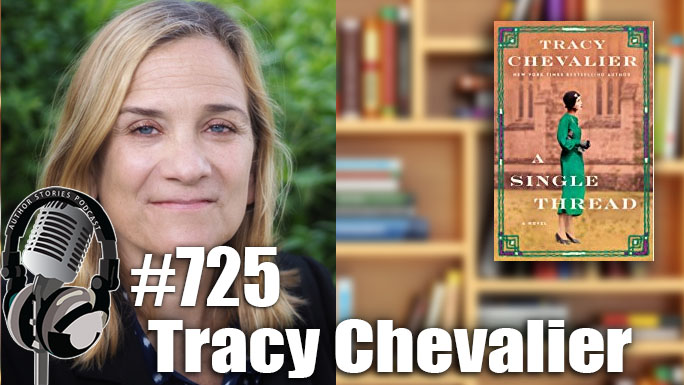 “A buoyant tale about the path to acceptance and joy–beginning, like all journeys, with one brave step.”–People

An immersive, moving story of a woman coming into her own at the dawn of the Second World War, from internationally bestselling author Tracy Chevalier

Violet finds support and community in the group, fulfillment in the work they create, and even a growing friendship with the vivacious Gilda. But when forces threaten her new independence and another war appears on the horizon, Violet must fight to put down roots in a place where women aren’t expected to grow. Told in Chevalier’s glorious prose, A Single Thread is a timeless story of friendship, love, and a woman crafting her own life.

Tracy Chevalier is the author of nine novels, including the international bestseller GIRL WITH A PEARL EARRING, which has sold over 5 million copies and been made into an Oscar-nominated film starring Scarlett Johansson and Colin Firth. American by birth, British by geography, she lives in London with her husband and son. Her latest novel, AT THE EDGE OF THE ORCHARD, is set among the apple trees in Ohio and the redwoods and sequoias of California. Her next book NEW BOY is a re-telling of Othello, set in a Washington DC playground in the 1970s. It’s part of the Hogarth Shakespeare Project in which various writers take a Shakespeare play and write what Jeanette Winterson described as a “cover version.” Tracy is a Fellow of the Royal Society of Literature, and has honorary doctorates from her alma maters Oberlin College and the University of East Anglia. Her website www.tchevalier.com will tell you more about her and her books.