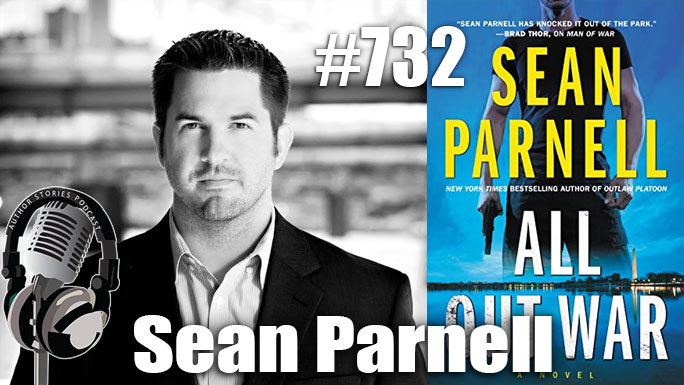 Today’s author interview guest is Sean Parnell, author of All Out War.

Special operative Eric Steele, introduced in Man of War, is on the hunt for a formidable Russian terrorist in this high-intensity tale of international intrigue from the author of the New York Times bestselling memoir Outlaw Platoon.

Badly injured while stopping a rogue agent from obtaining weapons of mass destruction, elite warrior Eric Steele is drawn back into service before he’s ready when unknown assailants break into his home near Pittsburgh, injuring his mother and stealing his father’s pistol.

An Alpha—an elite soldier under the direct command of the president of the United States—Steele is hell-bent on finding the attackers and bringing them to justice. While tracking his foe, Steele discovers he’s become entangled in a far more sinister plan that’s already been set in motion.

A terrorist named Zakayev, once locked away in a maximum-security prison in Russia, has escaped and joined forces with Hassan Sitta, a man who’s shown his prowess and ingenuity with a spectacular bomb planted somewhere in the Middle East that hasn’t been ignited—and no one can find. But that is only the beginning of a horrifying plan that, if it succeeds, will shatter international alliances and bring the world to the brink of war.

Now, the hunted must turn the tables on the hunter—Steele must find a way to stay alive and stop Zakayev before innocent lives are lost.

Sean Parnell is the New York Times Bestselling author of Man of War and Outlaw Platoon, a U.S. Army combat veteran, Infantry Officer, and co-founder of a charity called The American Warrior Initiative. He retired from service as a highly decorated Captain, receiving 2 Bronze Stars (one for valor), and the Purple Heart.
When he is not traveling with the American Warrior Initiative, he speaks all over the nation on leadership, advises Congress on policy that will better serve our veterans and is a frequent contributor for Fox News. He lives in Pittsburgh with his three children.