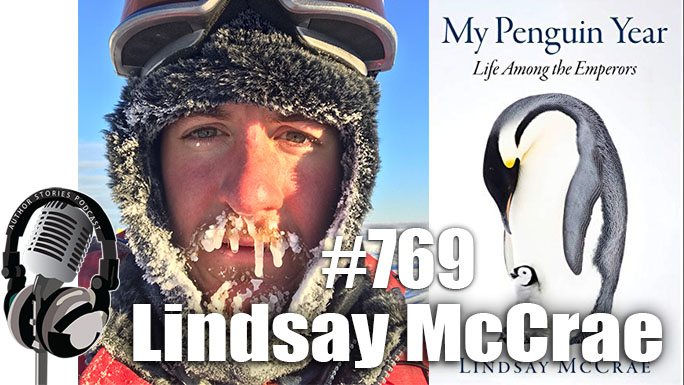 Today’s author interview guest is Lindsay McCrae, author of My Penguin Year: Life Among the Emperors.

A “remarkable memoir” (Nature) of life with an emperor penguin colony, gorgeously illustrated with 32 pages of exclusive photography

For 337 days, award-winning wildlife cameraman Lindsay McCrae intimately followed 11,000 emperor penguins amid the singular beauty of Antarctica. This is his masterful chronicle of one penguin colony’s astonishing journey of life, death, and rebirth—and of the extraordinary human experience of living amongst them in the planet’s harshest environment.

A miracle occurs each winter in Antarctica. As temperatures plummet 60° below zero and the sea around the remote southern continent freezes, emperors—the largest of all penguins—begin marching up to 100 miles over solid ice to reach their breeding grounds. They are the only animals to breed in the depths of this, the worst winter on the planet; and in an unusual role reversal, the males incubate the eggs, fasting for over 100 days to ensure they introduce their chicks safely into their new frozen world.

My Penguin Year recounts McCrae’s remarkable adventure to the end of the Earth. He observed every aspect of a breeding emperor’s life, facing the inevitable sacrifices that came with living his childhood dream, and grappling with the personal obstacles that, being over 15,000km away from the comforts of home, almost proved too much. Out of that experience, he has written an unprecedented portrait of Antarctica’s most extraordinary residents.

Lindsay’s passion for wildlife began at an early age. Growing up in the rural Lake District in the north of England, Lindsay has been captivated by all aspects of the natural world since he can remember. At school he built wildlife ponds and gardens, while mornings, evenings and even lunchtimes were spent exploring any green space he could find.

During Lindsays early teens, a family of badgers near his home became the main focus, and camped out every night just metres from their sett entrance hidden under camouflage Lindsay would be surrounded by cubs frolicking in carpets of bluebells. Watching wildlife became an obsession.

His passion soon turned into a need to capture what he was seeing on film. He took out a loan from his mother and invested in his own camera at the age of 15 and never looked back.

Lindsay has been filming wildlife professionally for over 10 years and has travelled all over the UK and across the world filming everything from wolves in deep Alaska, to orangutans in the Indonesian jungle. In 2017 for almost an entire year, Lindsay lived in Antarctica isolated from the rest of the world, documenting the lives of a colony of emperor penguins.

When not abroad observing or photographing the natural world, Lindsays other obsessions include road cycling, fly fishing and bread making. Living with his wife Becky and two boys, a pair of extremely energetic cocker spaniels, Willow and Ivy, keep him busy when back at home.