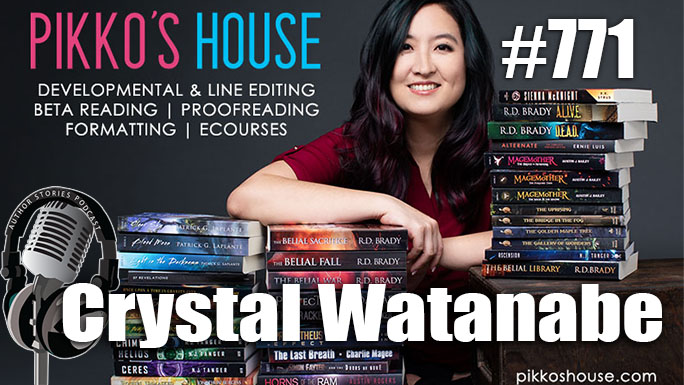 Today’s guest is Crystal Watanabe, editor and educator talking about how an editor can help you achieve your best product.

My name is Crystal Watanabe, and I am an independent editor for fiction authors. I’ve loved books all my life, and I believe that helping authors achieve their publishing dreams is what I was meant to do.

In 2012, I did a beta reading for Hugh Howey, bestselling author of Wool, for Third Shift: Pact. He was so happy with my feedback that he suggested I start doing this for authors, and he offered to send referrals my way for editing if I wanted it. I was working in a career in administration at the time, so I wasn’t ready. I eventually took him up on his offer, and I began editing full-time in late summer 2014. Pikko’s House now works on over seventy-five novels a year and serves more than 150 clients around the world, both in self-published and traditionally published circles.

Personal Details
I’m a 39-year-old wife and mother to three living in Honolulu, Hawaii. Born and raised in the small town of Hilo, Hawaii, I grew up reading nonstop, doing that ridiculous flashlight-under-the-covers thing until I read myself into needing glasses in the first grade. After that, my parents let me read whenever I wanted as long as I had a good, strong lamp nearby.

I’m a Domokun addict, a Marvel fangirl, and a former hardcore gamer. In fact, the name Pikko was the name of my character in Final Fantasy XI, where I achieved minor fame as a gardening Tarutaru, spending hours and hours of time in my Mog House. Thus the name Pikko’s House.

I am the owner and cofounder of the Hunger Games fansite Jabberjays.net. I cohosted EnderCast for 37 episodes and JabberCast for 28 episodes.