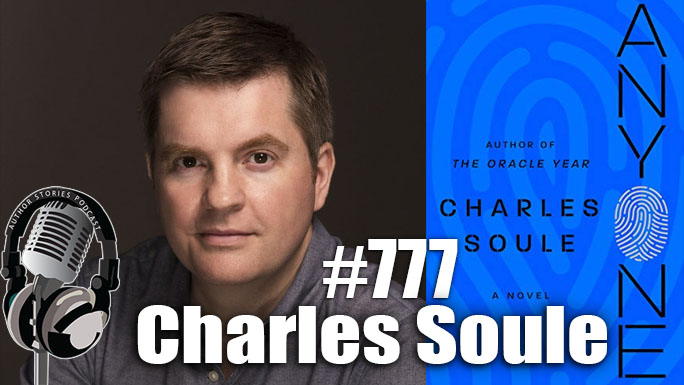 Today’s author interview guest is Charles Soule, author of the new novel Anyone.

Soon to be adapted for television by Carnival, creators of Downton Abbey

An Amazon Best of the Month Pick for December

An Indie Next Pick

Bestselling author of The Oracle Year, Charles Soule brings his signature knowledge—and wariness—of technology to his new novel set in a realistic future about a brilliant female scientist who creates a technology that allows for the transfer of human consciousness between bodies, and the transformations this process wreaks upon the world.

Inside a barn in Ann Arbor, Michigan, a scientist searching for an Alzheimer’s cure throws a switch—and finds herself mysteriously transported into her husband’s body. What begins as a botched experiment will change her life—and the world—forever…

Over two decades later, all across the planet, “flash” technology allows individuals the ability to transfer their consciousness into other bodies for specified periods, paid, registered and legal. Society has been utterly transformed by the process, from travel to warfare to entertainment; “Be anyone with Anyone” the tagline of the company offering this ultimate out-of-body experience. But beyond the reach of the law and government regulators is a sordid black market called the darkshare, where desperate “vessels” anonymously rent out their bodies, no questions asked for any purpose – sex, drugs, crime… or worse.

Anyone masterfully interweaves the present-day story of the discovery and development of the flash with the gritty tale of one woman’s crusade to put an end to the darkness it has brought to the world twenty-five years after its creation. Like Blade Runner crossed with Get Out, Charles Soule’s thought-provoking work of speculative fiction takes us to a world where identity, morality, and technology collide.

Charles Soule is a Brooklyn, New York-based novelist, comic book writer, musician, and attorney. While he has worked for DC and other publishers, he is best known for writing Daredevil, She-Hulk, Death of Wolverine, and various Star Wars comics from Marvel Comics (Darth Vader, Poe Dameron, Lando and more), and his creator-owned series Curse Words from Image Comics (with Ryan Browne) and Letter 44 from Oni Press (with Alberto Jimenez Alburquerque.)

His first novel, The Oracle Year, about a man who can see the future and way this ability changes the world, will be released in April 2018 by the Harper Perennial imprint of HarperCollins.

A more complete (but not comprehensive) bibliography can be found here.