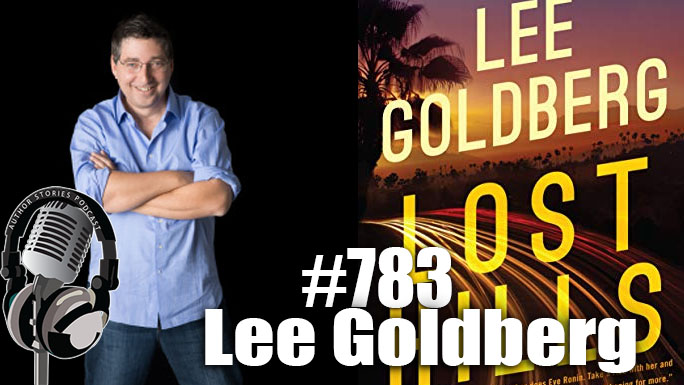 We kick off 2020 today with an interview with Lee Goldberg talking about his amazing career and his new book Lost Hills (Eve Ronin Book 1).

“Lost Hills is Lee Goldberg at his best. Inspired by the real-world grit and glitz of LA County crime, this book takes no prisoners. And neither does Eve Ronin. Take a ride with her and you’ll find yourself with a heroine for the ages. And you’ll be left hoping for more.” —Michael Connelly, #1 New York Times bestselling author

“Thrills and chills! Lost Hills is the perfect combination of action and suspense, not to mention Eve Ronin is one of the best new female characters in ages. You will race through the pages!” —Lisa Gardner, #1 New York Times bestselling author

A video of Deputy Eve Ronin’s off-duty arrest of an abusive movie star goes viral, turning her into a popular hero at a time when the Los Angeles County Sheriff’s Department is plagued by scandal. The sheriff, desperate for more positive press, makes Eve the youngest female homicide detective in the department’s history.

Now Eve, with a lot to learn and resented by her colleagues, has to justify her new badge. Her chance comes when she and her burned-out, soon-to-retire partner are called to the blood-splattered home of a missing single mother and her two kids. The horrific carnage screams multiple murder—but there are no corpses.

Eve has to rely on her instincts and tenacity to find the bodies and capture the vicious killer, all while battling her own insecurities and mounting pressure from the media, her bosses, and the bereaved family. It’s a deadly ordeal that will either prove her skills…or totally destroy her.

Okay, that’s not true. But he wants this biography to be really exciting, so pay attention. If things bog down, I’ve been instructed to add a car chase or some explicit sex.

He published his first book .357 Vigilante (as “Ian Ludlow,” so he’d be on the shelf next to Robert Ludlum) while he was still a UCLA student. The West Coast Review of Books called his debut “as stunning as the report of a .357 Magnum, a dynamic premiere effort,” singling the book out as “The Best New Paperback Series” of the year. Naturally, the publisher promptly went bankrupt and he never saw a dime in royalties.

His many subsequent books include the non-fiction Successful Television Writing and Unsold Television Pilots as well as the novels My Gun Has Bullets, The Walk, King City, McGrave, Dead Space, and Watch Me Die, which was nominated for a Shamus Award for Best Novel from the “Private Eye Writers of America.” He’s also the writer/co-creator of The Dead Man, the monthly series of original novels published by Amazon’s 47North imprint, and co-author with Janet Evanovich of the five international bestselling Fox & O’Hare novels (The Heist, The Chase, The Job, The Scam and The Pursuit) and two New York Times bestselling prequel novellas (The Shell Game and Pros & Cons)

She tore off her clothes and tackled him onto the floor, unable to control her raging lust. Nothing excited her more than being around a writer with a big list of books.

Got your attention again? Good. I don’t know about you, but I was starting to nod off. Where was I? Oh yes…

He’s written and produced TV shows in Canada (Murphy’s Law, Cobra, Missing), England (Stick With Me Kid, She Wolf of London) and Germany (Fast Track: No Limits). His mystery writing for television has earned him two Edgar Award nominations from the Mystery Writers of America.

His two careers, novelist and TV writer, merged when he wrote the eight books in the Diagnosis Murder series of original novels, based on the hit CBS TV mystery that he also wrote and produced. He followed that up by writing fifteen bestselling novels based on Monk, another TV show that he worked on. His Monk novels have been translated and published in Germany, Poland, Thailand, Japan, Turkey, and many other countries.

In addition to his writing, he’s worked as an international TV development expert and consulting producer for production companies and major networks in Canada, France, Germany, Spain, Sweden, Belgium, and the Netherlands.

Goldberg lives in Los Angeles with his wife and his daughter and still sleeps in Man From U.N.C.L.E. pajamas.