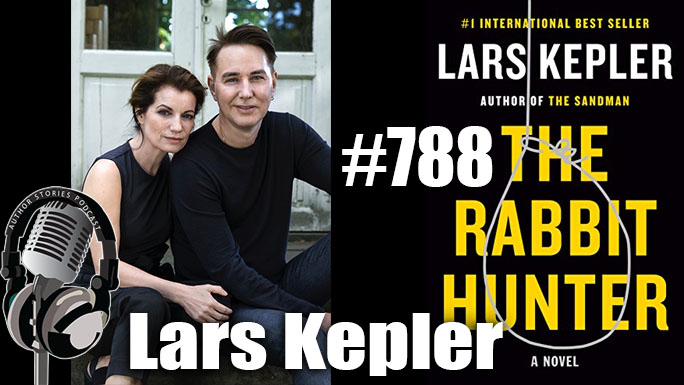 Today’s author interview is with Lars Kepler, author of the new thriller The Rabbit Hunter. Lars Kepler is the pseudonym for husband-and-wife writing duo Alexandra Coelho Ahndoril and Alexander Ahndoril.

Ten little rabbits, all dressed in white
Tried to get to heaven on the end of a kite.
Kite string got broken, down they all fell,
Instead of going to heaven, they all went to…

It begins with a nursery rhyme. Nineteen minutes later you die.

A masked stranger stands in the shadows. He watches his victim through the window. He will kill him slowly—make him pay.

Soon the Rabbit Hunter has claimed another three victims. This predator will stop at nothing to reap his ultimate revenge. It’s up to Joona Linna and Saga Bauer to untangle one of the most complex cases of their career, and follow the killer’s trail of destruction back to one horrific night of violence.

LARS KEPLER is the pseudonym of the critically acclaimed husband-and-wife team Alexandra Coelho Ahndoril and Alexander Ahndoril. Their number-one internationally best-selling Joona Linna series has sold more than fourteen million copies in forty languages. The Ahndorils were both established writers before they adopted the pen name Lars Kepler and have each published several acclaimed novels. They live in Stockholm, Sweden.