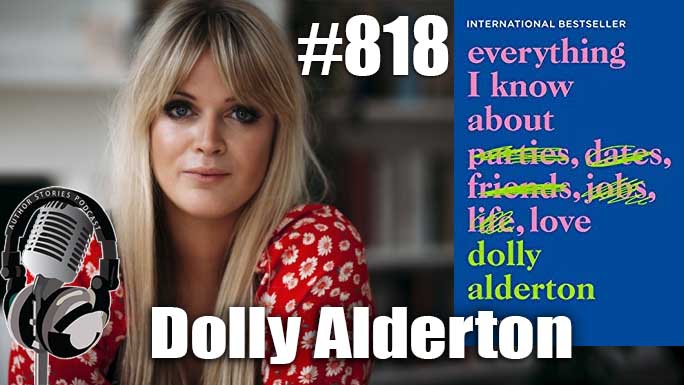 Today’s author interview guest is Dolly Alderton, author of Everything I Know About Love: A Memoir.

“There is no writer quite like Dolly Alderton working today and very soon the world will know it.”–Lisa Taddeo, author of #1 New York Times bestseller Three Women

“Dolly Alderton has always been a sparkling Roman candle of talent. She is funny, smart, and explosively engaged in the wonders and weirdness of the world. But what makes this memoir more than mere entertainment is the mature and sophisticated evolution that Alderton describes in these pages. It’s a beautifully told journey and a thoughtful, important book. I loved it.”–Elizabeth Gilbert, New York Times bestselling author of Eat, Pray, Love and City of Girls

The wildly funny, occasionally heartbreaking internationally bestselling memoir about growing up, growing older, and learning to navigate friendships, jobs, loss, and love along the ride

When it comes to the trials and triumphs of becoming an adult, journalist and former Sunday Times columnist Dolly Alderton has seen and tried it all. In her memoir, she vividly recounts falling in love, finding a job, getting drunk, getting dumped, realizing that Ivan from the corner shop might just be the only reliable man in her life, and that absolutely no one can ever compare to her best girlfriends. Everything I Know About Love is about bad dates, good friends and—above all else— realizing that you are enough.

Glittering with wit and insight, heart and humor, Dolly Alderton’s unforgettable debut weaves together personal stories, satirical observations, a series of lists, recipes, and other vignettes that will strike a chord of recognition with women of every age—making you want to pick up the phone and tell your best friends all about it. Like Bridget Jones’ Diary but all true, Everything I Know About Love is about the struggles of early adulthood in all its terrifying and hopeful uncertainty.

Hello! I’m Dolly Alderton – an author, journalist and podcast host. I used to write these About sections in the third person, to imply that a mystery narrator was observing all these things about me from afar, but I’ve decided to abandon that form in this iteration of my website oeuvre.

So, I’ll try to keep this brief. I am the author of the Sunday Times best-selling memoir Everything I Know About Love, published by Fig Tree/Penguin. It won a National Book Award, was nominated for Waterstones Book Of The Year and a British Book Award and has been translated into 20 languages. I am currently writing my second book for Fig Tree, a novel called Ghosts, which will be published in October 2020.

I have also been a freelance journalist for the best part of a decade, writing features, interviews and columns for a range of magazines and papers such as The Sunday Times, The Telegraph, GQ, The New Statesman, Red, Marie Claire, Marie Claire Australia, Esquire, Grazia, Glamour, Cosmopolitan, Stylist, ES Magazine, The Evening Standard, Spectator, Man Repeller, Vice, and Elle. From 2015-2017 I wrote a weekly dating column for The Sunday Times Style. Since September 2018 I have written a general column for The Sunday Times Style. In 2019 I was shortlisted for a BSME award for columnist of the year. I also regularly contribute interviews and features for the magazine. In 2014, I came third place in The Telegraph’s Cassandra Jardine Memorial Prize for young women journalists with my piece on my love of Desert Island Discs.

Alongside Pandora Sykes, I am the co-host and co-creator of The High Low, a current affairs and pop culture discussion show and Britain’s leading women’s podcast. The High Low began in February 2017 and now reaches an average of 250,000 weekly listeners and one million downloads a month.

To mark the publication of Everything I Know About Love, I created and hosted a podcast mini-series called Love Stories, in which I talked to guests about their most defining relationships. All 18 episodes, including conversations with Vanessa Kirby, Stanley Tucci, Lilly Allen and Sharon Horgan, are available to listen to online.

In 2018-2019, I went on a 22-date tour called Everything I Know About Love Live, produced by Fane Productions. In the show, writer Lauren Bensted and I were in conversation on topics relating to the themes of the book. The opening night of the second leg of the tour was at a sold-out Palladium, where we like to think we made theatre history when the bar completely ran out of white wine. In autumn, Fane Productions produced The High Low’s first tour The High Low Experience.

I also write for TV. I currently have two scripts in development – the TV adaptation of Everything I Know About Love with Working Title TV and a comedy drama with Tiger Aspect.

Before I became a full-time freelance writer in 2015, I worked full-time in TV. My first job in 2011 was as the Story Producer for series 2-5 of The BAFTA-winning Made in Chelsea, made by Monkey Kingdom. I then worked in structured reality, comedy and entertainment development at Monkey Kingdom and drama development at Objective Productions for three years. I was script assistant on the final series of E4’s Fresh Meat and directed all the behind-the-scenes online videos for the last series of Fresh Meat and the last series of Channel 4’s Peep Show. ​

In 2015, my first short film Anna, Island – co-written and co-directed with Lauren Bensted produced by Ben Woodsmith and starring Sia Berkeley, Harry Michell, Jessie Cave, and Alfie Brown – was accepted to The London Short Film Festival. Prior to that, we also made The Confluence; a short documentary film about two friends who swim around Tagg’s Island – a little known haven in The Thames. Both can be watched in the film section of this site.

From 2016-2018, I wrote a weekly newsletter, The Dolly Mail. It featured a piece written by me at the top and a guest piece by a writer whose work I love. It gained just under 10,000 subscribers. You can still read the archive of all the early newsletters here and later ones can be read here.

In 2019, I was honoured to be a judge for The Women’s Prize For Fiction – you can read more about the prize, long-list, short-list and winner here. I have been featured on Forbes’ 2018 30 Under 30 List, The Elle List and The Evening Standard’s Progress 1000 in 2018 and 2019. My proudest moment, however, was finally being featured on The Rod Stewart official fan-club site.