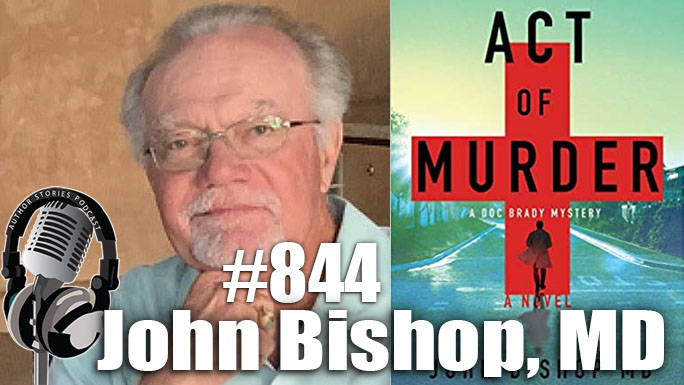 Doc Brady became an orthopedic surgeon to avoid being surrounded by death. But now it’s everywhere around him.

One spring day in 1994 Houston, Dr. Jim Bob Brady witnesses his neighbor’s ten-year-old son killed by a hit-and-run driver. An accident, or an act of murder? After the death, Brady enlists the help of his twenty-year-old son J. J. and his wife Mary Louise in chasing down clues that take them deeper and deeper into a Houston he never imagined existed. In the process, they discover a macabre conspiracy stretching from the ivory towers of the largest teaching hospital in Texas, to the upper reaches of Houston’s legal community, to the shores of Galveston.

Doc Brady soon realizes that the old adage remains true: The love of money is the root of all evil.

About John Bishop M.D.
As an author, I find it difficult to write about myself. Others seem so much more interesting to me.

I was born and raised in Waco, Texas. My mother worked as a secretary to the dean of the music school at Baylor University. My dad worked for the MKT Railroad and was very active in the U.S. Army Reserve. Mine was a very conservative household, with mandatory church attendance Sunday morning and Sunday and Wednesday nights. Eventually, I recovered from that aspect of my childhood, although it took quite a few years. What I observed growing up in a Pentecostal church environment—speaking in tongues, rolling in the aisles—was quite frightening for a kid. Seems I spent a great deal of my time at church hiding under the pew. I did learn to play the piano and organ during those formative years, and when I wasn’t playing official church music or going to school, I would sneak off and play blues, R & B, and gospel at the local taverns and churches on “the other side of the tracks.”

I graduated from La Vega High School and moved on to Baylor University. I became interested in medicine during college, changed my course curriculum, and ended up with a B. A. in chemistry and acceptance to Baylor College of Medicine in Houston, Texas. I spent three and a half years in medical school before I came across a specialty I enjoyed, which was orthopedic surgery. I ruled out OB-GYN, pathology, and psychiatry early on. It seemed to me the medical specialties were full of patients that were chronically ill and/or dying. The thing I liked about orthopedics was that most of the patients were healthy and well. They were, however, temporarily injured, and both patient and doctor could expect a recovery after an appropriate healing time following surgery.

I spent the next six years learning to be an orthopedic surgeon and acquired specialty training in orthopedic foot and ankle surgery. My training led to a position in Houston as a faculty member of the Orthopedic Department of Baylor College of Medicine, where I taught med students, residents, and fellows, and handled a large volume of private patients as well. All went along fairly well for about fourteen years.

Some of my colleagues and I became disgruntled with the academic system and its challenges, to the extent that we left our college home and opened our own facility, the Texas Orthopedic Hospital. I still had a very busy practice, but without the teaching and academic responsibilities, I found myself with—shock and amazement—free time. I started playing with an R & B band, Bert Wills and the Crying Shames, on the weekends. That was a wonderful experience for me, until the road travel became more than I could handle. Shortly thereafter, I began to write. I can’t say where the desire came from. I finally had a sense of peace, perhaps, because of a solid marriage to Joan Berry, who provided me with a loving and supportive partner.

I’ve been blessed with three wonderful children, all adults now, and four grandsons. My son Jim is a successful software engineer; daughter Kellie is a retired graphic artist and wife and mother extraordinaire; and daughter Bonnie is a singer/songwriter who has been awarded a Grammy for her songwriting talents.

I have always read voraciously, especially crime fiction and medical mysteries. My best paper friends were Robin Cook and Michael Crichton, two M.D.s that were very successful in the writing business. My first novel was called Act of Murder, the central character of which is Dr. Jim Bob Brady, Houston orthopedic surgeon. Joan, a former Saks and Hallmark executive, had extensive connections in New York due to her business dealings there. She found an agent, a well-known husband-and-wife team that had represented John D. MacDonald and Kurt Vonnegut. In spite of their best efforts, a publisher that would take the book could not be found. However, the writing “disease” had overtaken me, and I continued to write. Between 1993 and 2000 I wrote four more novels: Act of Deception, Act of Revenge, Act of Negligence, and Act of Fate. Nothing got published.

Out of frustration, I abruptly quit writing and took up, at the behest of friends and colleagues, golf, which mitigated somewhat the frustration of publication failure. I continued on with the practice of orthopedic surgery until my retirement in 2007, after which I became a golf junkie. My son Jim would periodically ask me about my writing and the novels. All three of my children remember the days of me holed up either in my home office or upstairs in the loft of our beach house in Galveston, pounding the Mac keyboard all hours of the day and night. Ultimately I discarded the manuscripts, keeping only the five tiny floppy disks, all that remained of my passion of seven years.

In 2019, my son again asked me about writing. I told him I had only the disks left, and that I had tried a few times to get the data on the disks converted to a CD so that I could at least read what I had written twenty-odd years earlier. He wanted me to let him try. Even after all that time, I was reluctant to part with those disks—they were a reminder of my past passion for writing—but I gave them to him and moved on.

Then on Father’s Day that year, he gave me a nicely wrapped gift. I opened it, and there is a beautiful red-and-black cover, in large-paperback format, was Act of Murder, published by Amazon. I was so emotional, I had to leave the room. When I recovered, he was able to tell me the process by which he had reclaimed the data from the disks and reformatted it, through much time and trouble, and that after all those years, my book was in print. Words could not and cannot express my joy nor my appreciation for the work involved to produce the book. Of course, Joan was in on it the entire time, never saying a word until Father’s Day.

I read all five books—he had put all five into bound novels but not ready for publication—and I decided that at least back then, I had some stories to tell. I then wondered if I still had “the juice,” and I started writing again. Act of Atonement, the sixth book in the Jim Bob Brady series, is the product of that long respite from writing.

I’m still writing, working on the seventh novel in the Jim Bob Brady series, and now you readers can decide if I still have some stories to tell.