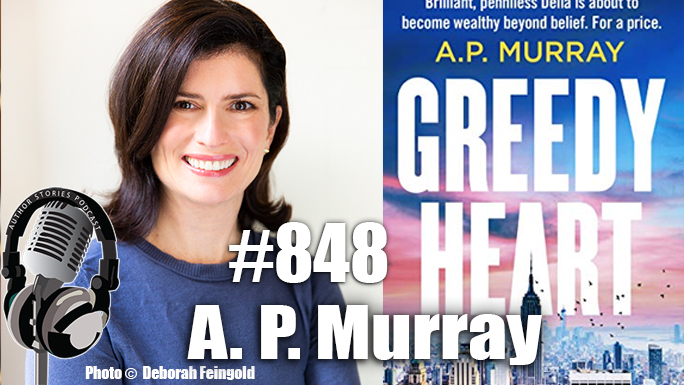 It’s 2006, and Delia Mulcahy is living in a shabby apartment and facing crushing student debt. Suddenly, she’s plucked from obscurity to work for Wall Street’s top hedge fund. Determined to make her millions, Delia must master the cutthroat world of big-stakes trading and profit off of the cataclysm of the looming crash.

In the underbelly of finance, no one is who they say they are. Delia finds herself embroiled in devious schemes and duplicitous deals as her recklessness threatens every relationship in her life: family, friends and especially the two rival CEOs vying for her genius.

It’s a high-risk game and she is a better player than most. When her soul is on the line, how much is enough for her greedy heart?

A.P. Murray’s sprawling Irish Catholic family has roots in New York City going back four generations. Her industrialist great grandfather, Thomas E. Murray, Sr., co-founded Consolidated Edison, was second only to Edison the number of patents attributed to him, and is credited with creating the mass distribution of electricity in New York City. Murray descends from this lace-curtain heritage and also from a working-class mother who rose to international fame as a fashion model.

A technology consultant by day, Murray began her career as a teacher and journalist before founding an early stage web company, which built many national brands’ first websites. The firm, tmg-emedia, later expanded into broad-ranging technology consulting. Murray has won multiple awards for her technology leadership and as a woman tech entrepreneur. She lives in New York with her husband and business partner, Christos Moschovitis, and her whippet Orpheus. Her horse, Hershey, resides separately in Connecticut. Greedy Heart is her debut novel.