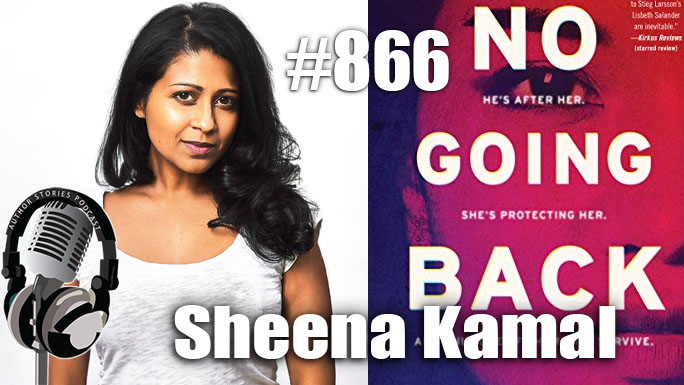 Today’s author interview guest is Sheena Kamal. Sheena returns to the show to talk about her new book No Going Back: A Novel (Nora Watts Book 3).

From Strand Critics Award winner Sheena Kamal, comes the third novel featuring the brilliant, fearless, deeply flawed Nora Watts whose vendetta against a triad enforcer escalates when he places a target on her daughter’s back.

Find your enemy. Before he finds you.

Nora Watts has a talent for seeing what lies beneath strangers’ surfaces, and for knowing what they’re working hard to keep hidden. Somehow, it’s the people closest to her she has trouble truly connecting with. In the case of Bonnie, the teenage daughter Nora gave up for adoption, she has to keep trying. For Bonnie has a target on her back—and it’s all because of Nora.

Two years ago, Bonnie was kidnapped by the wealthy Zhang family. Though Nora rescued her, she made a powerful enemy in Dao, a mysterious triad enforcer and former head of the Zhangs’ private security. Now Dao is out for revenge, and she needs to track him down in order to keep herself—and Bonnie—safe.

On Dao’s trail, Nora forms an unlikely partnership with Bernard Lam, an eccentric playboy billionaire with his own mysterious grudge to bear, and reunites with Jon Brazuca, ex-cop turned private investigator and Nora’s occasional ally. From Canada to southeast Asia they pursue Dao, uncovering a shadowy criminal cabal. But soon, the trail will lead full circle to Vancouver, the only home Nora’s ever known, and right to the heart of her brutal past.

Sheena Kamal was born in the Caribbean and immigrated to Canada as a child. She holds an HBA in political science from the University of Toronto, and was awarded a TD Canada Trust scholarship for community leadership and activism around the issue of homelessness. Kamal has also worked as a crime and investigative journalism researcher for the film and television industry– academic knowledge and experience that inspired this debut novel. She lives in Vancouver, Canada.

“Utterly compelling, rich with voice and psychological insight, populated with heartbreakingly real characters, The Lost Ones will stay with you for a long, long time after you finish the last page. Perhaps forever.”
–Jeffery Deaver, #1 International Bestselling Author

“Suspenseful, atmospheric and often deeply moving, THE LOST ONES features one of the most complicated and fascinating protagonists I’ve come across in a long time. I’d follow Nora Watts (and her dog Whisper) anywhere.”
–Alison Gaylin, USA Today Bestselling Author