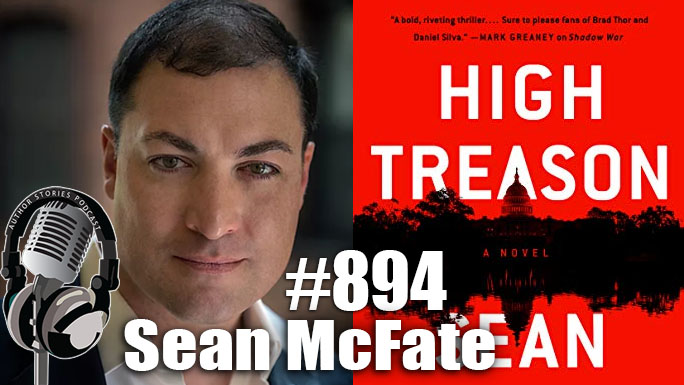 “McFate just might be the next Tom Clancy, only I think he’s even better… The action is non-stop and shuttles back and forth between scary-believable and rollicking good fun. I read High Treason during a six-hour plane ride and the trip went by like the snap of my fingers.” —James Patterson

In this pulse-pounding third action thriller for fans of Brad Thor and David Baldacci, hero Tom Locke, introduced in Shadow War and Deep Black, must stop traitors and ruthless mercenaries working together to overthrow the president.

En route to the National Prayer Breakfast, the U.S. vice president’s motorcade is hit in a vicious, expertly planned attack that throws Washington, D.C. into chaos. Everyone assumes it’s ISIS—everyone but young FBI agent Jennifer Lin. She is certain that Russia is behind the strike.

Half a world away, military contractor Tom Locke has his own doubts about what happened—and who did it. He suspects his former employer, Apollo Outcomes, might be involved. But why would the global security firm orchestrate an attack on US soil?

Returning to D.C., Locke discovers that a civil war has fractured Apollo. A division has splintered off, a rogue unit led by an ambitious, unprincipled former colleague who may have planned the attack himself. But Apollo couldn’t have pulled this off without help from inside the government. The official’s itinerary and route were confidential—which means there must be a traitor high up in either the White House or the NSA who is leaking information to Apollo.

But why? And who could be pulling the strings? Islamic fundamentalist terrorists? Or is this a new ploy by Putin to discredit the U.S. government and divide it from its democratic allies? Only Locke can get to the bottom of the conspiracy that traverses the globe and blow it apart with one strategic strike before it’s too late.

“High Treason has brutal assassinations, shocking betrayals, even heated gun battles in the shadow of the White House. It had me breathless—from the sheer audacity of its storytelling to its breakneck pacing. It’s not to be missed!” —James Rollins, #1 New York Times bestselling author of The Last Odyssey.

Dr. Sean McFate is a foreign policy expert, author and novelist. He is a Senior Fellow at the Atlantic Council, a Washington DC think tank, and a professor of strategy at the National Defense University and Georgetown University’s School of Foreign Service. Additionally, he serves as an Advisor to Oxford University’s Centre for Technology and Global Affairs.

McFate’s career began as a paratrooper and officer in the U.S. Army’s 82nd Airborne Division. He served under Stan McChrystal and David Petraeus, and graduated from elite training programs, such as Jungle Warfare School in Panama. He was also a Jump Master.

McFate then became a private military contractor and paramilitary. Among his many experiences, he dealt with African warlords, raised armies for U.S. interest, rode with armed groups in the Sahara, conducted strategic reconnaissance for the extractive industry, transacted arms deals in Eastern Europe, and helped prevent an impending genocide in the Rwanda region.

In the world of international business, McFate was a Vice President at TD International, a boutique political risk consulting firm with offices in Washington, Houston, Singapore and Zurich. Additionally, he was a program manager at DynCorp International, a consultant at BearingPoint (now Deloitte Consulting), and an associate at Booz Allen Hamilton.

McFate writes novels based on his own military experiences. His latest thriller is High Treason, and #1 New York Timesbestselling author James Patterson said: “Sean McFate just might be the next Tom Clancy, only I think he’s even better…The action is non-stop.” James Rollins said: “It had me breathless—it’s not to be missed!”

McFate also writes serious non-fiction. The New Rules of War: How America Can Win—Against Russia, China, and Other Threats (Morrow) has been called “The Freakonomics of modern warfare.” It was named a “Book of the Year” by The Economist, The Times [UK], and The Evening Standard, and is included on West Point’s “Commandant’s Reading List.” Admiral Jim Stavridis, the former NATO Supreme Allied Commander, said: “Stunning. Sean McFate is a new Sun Tzu.” Max Hastings wrote in The Sunday Times: “[This] iconoclastic book is being hailed by radicals as a wake-up call to governments and armed forces everywhere.” It has been translated into six languages and the British edition is titled Goliath: Why the West Isn’t Winning. And What We Must Do About It (Penguin). McFate also authored The Modern Mercenary: Private Armies and What They Mean for World Order (Oxford Univ Press). The Economist called it a “fascinating and disturbing book.”

McFate is a consultant to the U.S. military, U.S. intelligence community, United Nations, and Hollywood. His has written for the New York Times, Washington Post, The Atlantic, The New Republic, Foreign Policy, Politico, Daily Beast, Vice Magazine, War on the Rocks, Military Review and African Affairs. He has appeared on CNN’s Amanpour, Morning Joe, Fox and Friends, MSNBC, Fox, Sky News, NPR, BBC, WSJ, FT, Economist, Vice/HBO, The Discovery Channel, and American Heroes Channel. As a scholar, he has authored eight book chapters in edited academic volumes, and two monographs on modern war for the U.S. Department of Defense.

McFate holds a BA from Brown University, MPP from the Harvard Kennedy School of Government, and a Ph.D. in international relations from the London School of Economics and Political Science (LSE). He was also a Fellow at Oxford. McFate lives in Washington, DC.