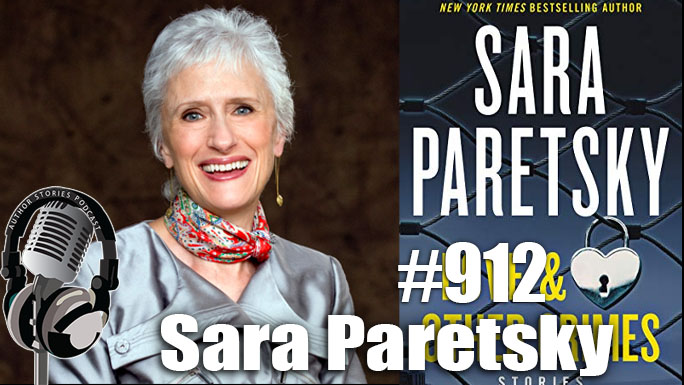 New York Times bestselling author Sara Paretsky is the master of twisting suspense and compelling plots. She has been hailed by the crime community as “a legend” (Harlan Coben) and “one of the all-time greats” (Karin Slaughter). Her acclaimed novels featuring detective V.I. Warshawski have become one of the most celebrated series in modern fiction. Now in this spellbinding collection, Paretsky showcases her extraordinary talents with fourteen short stories, including one new V.I. story and seven other classics featuring the indomitable detective.

In “Miss Bianca,” a young girl becomes involved in espionage when she befriends a mouse in a laboratory that is conducting dark experiments. Ten-year-old V.I. Warshawski appears in “Wildcat,” embarking on her very first investigation to save her father. A hardboiled New York detective and elderly British aristocrat team up to reveal a murderer in Chicago during the World’s Fair in “Murder at the Century of Progress.” In the new title story, “Love & Other Crimes,” V.I. treads the line between justice and vengeance when the wrongful firing of a family friend makes him a murder suspect.

For longtime fans of V.I. Warshawski, new readers discovering her for the first time, or any lover of crime and bone-chilling suspense, Love & Other Crimes is a celebration of Paretsky’s exceptional storytelling skill and a searing exploration of the dark conspiracies and desperate human acts hiding in plain sight.

Sara Paretsky is the award-winning creator of the V I Warshawski detective novels. When Sara introduced V I in Indemnity Only in 1982, she revolutionized the mystery novel. By creating a female investigator who uses her wits as well a her fists, Sara challenged a genre in which women were traditionally either vamps or victims.

V I is the quintessential urban woman. She grew up in the shadow of the old steel mills on Chicago’s Southeast side and knows her way around every alley in town. She’s a street fighter, a singer, a bit of a clothes horse, and a woman of great intensity and passion.

So how much like V I is her creator? They certainly come from very different places. Sara grew up in rural Kansas where she attended a two-room school. She continues to believe the high point of her life came at the age of twelve when she was picked to play third base for the Kaw Valley District 95 baseball team.

Bleeding Kansas, Sara’s 14th novel, is set in the part of the Kaw River Valley where Sara grew up.

Sara first came to Chicago in 1966 to do community service work in the same neighborhood where Martin Luther King was organizing. It was a time of fierce passions in the city and in the country as people fought over racial justice, the rights and wrongs of the war in Vietnam, and women’s rights. Sara has always felt that that summer changed her life forever, and when she finished her undergraduate degree at the University of Kansas, she came back to make Chicago her home. Some of the history of that summer is recounted in her essay collection, Writing in an Age of Silence.

Like V I, Sara likes to sing, in an amateur way, has a hopeless passion for the Cubs, loves Italian shoes’and is obsessed by the search for the perfect cappuccino, so much so that she even went to cappuccino school.

In other academic ventures, Sara received a PhD in American History and an MBA from the University of Chicago. In 1976, she married physics professor Courtenay Wright. The two live in the city of Chicago with their wonder dog Callie. Their lives are made brighter by their adored granddaughter, Maia.

Sara shares V I’s passion for social justice. She founded Sisters in Crime in 1986 to support women readers and writers in the mystery world. To give back to the community, Paretsky established the Sara and Two C-Dogs Foundation, which primarily supports girls and women in the arts, letters, and sciences. She has endowed several scholarships at the University of Kansas, and has mentored students in Chicago’s inner city schools. She serves on the advisory boards of Literature for All of Us, a literacy group for teen moms, and Thresholds, which serves Chicago’s mentally-ill homeless.

Sara has received numerous awards, including the Diamond Dagger for Lifetime achievement from the British Crime Writers Association, the Gold Dagger for best novel for her book Blacklist, and the honorary degree of Doctor of Letters from several different universities. Sara’s books have been translated into almost thirty languages.