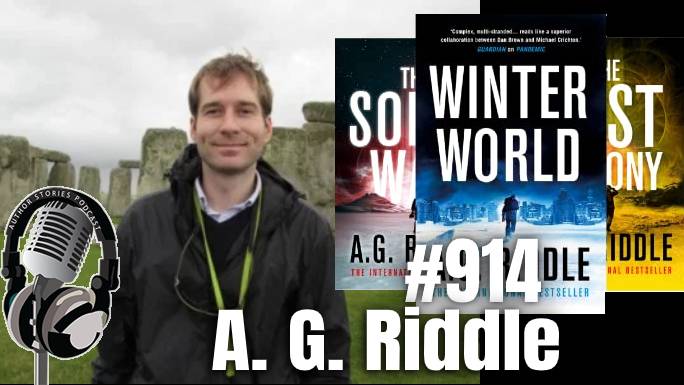 Today’s author interview guest is A. G. Riddle, author of the The Long Winter Trilogy.

From Book 1: A new ice age… and a shocking discovery…
will change humanity forever.

From the Wall Street Journal bestselling author of Departure, Pandemic, and The Atlantis Gene comes a spellbinding sci-fi thriller about a team of scientists racing to stop a new ice age and save humanity from extinction.

* Longlisted for the Wilbur Smith Award for best published novel. *

In the near future, a new ice age has begun.

Humanity stands on the brink of extinction.

Desperate for answers, scientists send probes into the solar system to take readings. Near Mars, they identify a mysterious object drifting toward the Sun. Is it the cause of the ice age? Or could it be humanity’s only hope of survival?

With time running out, NASA launches a mission to make contact. But the object isn’t what anyone thought. In the dark of space, alone, the team makes a discovery that will change the course of human history—and possibly end it.

Filled with real science, Winter World will forever change the way you look at our planet and humanity’s future. Its flawless pacing will keep you up late turning the pages until the final, mind-blowing revelation at the end—a twist you’ll never see coming.

“…reads like a superior collaboration between Dan Brown and Michael Crichton.”
—The Guardian on Pandemic

“This is apocalyptic sci-fi at its best.”
—Daily Mail on The Solar War

An Extended Look at Winter World

Around the world, people abandon their homes and flock to regions where they can survive. Nations prepare to go to war for the world’s last habitable zones.

Scientists search the cause of the new ice age. They send probes into the solar system to collect readings. Near Mars, a probe finds a mysterious object, drifting toward the Sun. Is it responsible for the new ice age? Or is it merely an observer? Or neither? Could it be a relic from a long-extinct civilization? One thing is certain: investigating the object is humanity’s best hope of survival.

As the ice age claims more lives and the world slides into anarchy, an international consortium launches a mission into space to make contact. But the first contact mission doesn’t go as planned. What the crew discovers out there is beyond anyone’s imagination.

Two members of the first contact mission may hold the keys to humanity’s salvation.

Dr. Emma Matthews is the commander aboard the International Space Station. For months, she has watched the world below freeze and civilization unravel. The headlines tell only half of the story. The messages from her sister tell the rest, of a world witnessing mass migrations, fighting for survival, struggling to provide a future for their children. When a catastrophe strikes the ISS, Emma faces her own fight for survival.

His debut novel, The Atlantis Gene, was released in March of 2013 and quickly became a global bestseller. Since then, he has released a total of nine novels, which have sold a combined FOUR MILLION copies worldwide and been translated in two dozen languages. Several of his books are in development for film/tv.

Riddle grew up in Boiling Springs, North Carolina and graduated from UNC-Chapel Hill. During his sophomore year in college, he started his first company with a childhood friend. He currently lives in Raleigh, North Carolina.

No matter where he is, or what’s going on, he tries his best to set aside time every day to answer emails and messages from readers. You can reach him at: ag@agriddle.com

The Origin Mystery Trilogy (2013)
The greatest mystery of all time…the history of human origins…will be revealed.

The Extinction Files Duology (2017)
A new kind of pandemic has begun–an event that will change humanity forever.

The Long Winter Trilogy (2019)
A new ice age–and a shocking discovery–will change everything.

** For a sneak peek at new novels, free stories, and more, join the email list at:
www.agriddle.com/email

If you don’t want to miss any Riddle news, you can:
Like the A.G. Riddle Facebook page:
facebook.com/agriddle

For more, please visit:
AGRiddle.com
Dr. James Sinclair is one of the greatest scientists alive. A mind before his time.