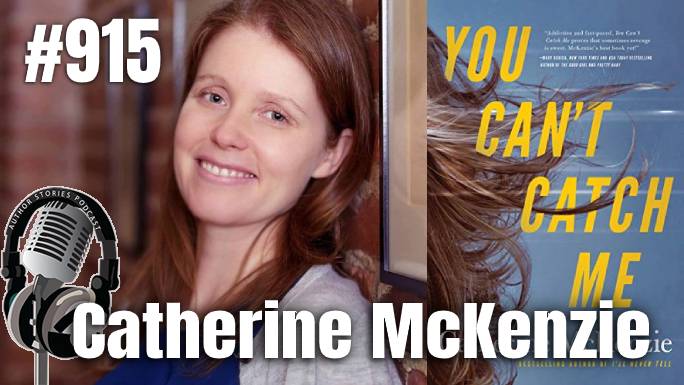 Today’s author interview guest is Catherine McKenzie, author of You Can’t Catch Me.

When the game is deception, nothing is as it seems in this novel of cunning psychological suspense by the #1 Amazon Charts bestselling author of I’ll Never Tell.

Do you want to play a game?

Twelve years ago Jessica Williams escaped a cult. Thanks to the private detective who rescued her, she reintegrated into society, endured an uncomfortable notoriety, and tried to put it all behind her. Then, at an airport bar, Jessica meets a woman with an identical name and birth date. It appears to be just an odd coincidence—until a week later, when Jessica finds her bank account drained and her personal information stolen.

Following a trail of the grifter’s victims, each with the same name, Jessica gathers players—one by one—for her own game. According to her plan, they’ll set a trap and wait for the impostor to strike again. But plans can go awry, and trust can fray, and as Jessica tries to escape the shadows of her childhood, the risks are greater than she imagined. Now, confronting the casualties of her past, Jessica can’t help but wonder…

Who will pay the price?

Catherine McKenzie was born and raised in Montreal, Canada. A graduate of McGill in History and Law, Catherine practices law in Montreal. An avid runner and skier, she’s the author of numerous bestsellers including HIDDEN, FRACTURED and THE GOOD LIAR. Her works have been translated into multiple languages.

HIDDEN was a #1 Amazon bestseller and a Digital Bookworld bestseller for five weeks. SMOKE was a #1 Amazon bestseller, and was named as a Best Book of October (Goodreads) and one of the Top 100 Books of 2015 (Amazon). FRACTURED was a Best Book of October 2016 (Goodreads). She is also the author of THE MURDER GAME under her pseudonym, Julie Apple (the protagonist of Fractured). In 2018, THE GOOD LIAR, received a starred review from Publisher’s Weekly and was an instant Globe and Mail bestseller.