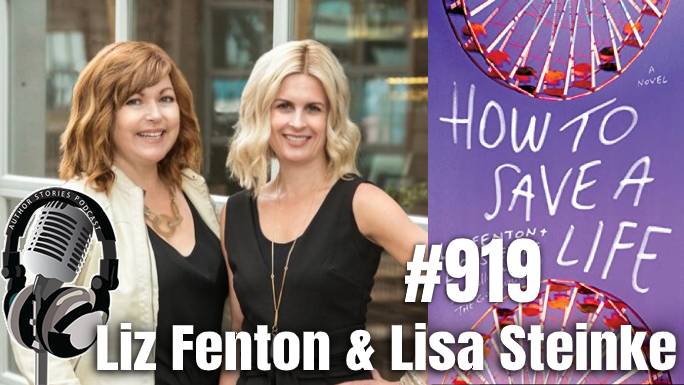 Authors Liz Fenton and Lisa Steinke return to Author Stories today to talk about their new book How to Save a Life.

The bestselling authors of The Good Widow deliver a modern, suspenseful twist on Groundhog Day that asks the question: How far are you willing to go to save the life of someone you love?

Dom is having a very bad day—one he literally can’t escape.

When Dom bumps into Mia, his ex-fiancée whom he hasn’t seen in almost a decade, he believes they’ve been given a second chance and asks her out. When Mia dies tragically on their date, Dom makes a desperate wish: to be given the chance to save her life. And when he wakes the next morning to the shock that she’s alive, he thinks his wish may have been granted. But day after day, no matter what he changes about their time together, she still meets a terrible fate.

Dom frantically searches for answers to save his beloved Mia and rekindle their former love. But the further he digs, the more obsessed he becomes, making him realize that slowing down time may be the only way to see things clearly. As he’s forced to confront the truth about himself and those he’s closest to, Dom vows that he’ll watch Mia die a thousand times if it means he can save her once.

Liz Fenton and Lisa Steinke have been best friends for over thirty years and survived high school and college together. They’ve coauthored seven novels, including The Two Lila Bennetts, Girls’ Night Out, and the Amazon Charts bestseller The Good Widow. In their former lives, Liz worked in the pharmaceutical industry, and Lisa was a talk show producer. They both reside with their families and several rescue dogs in San Diego, California. Find them at www.lizandlisa.com and on Instagram at @lisaandliz.