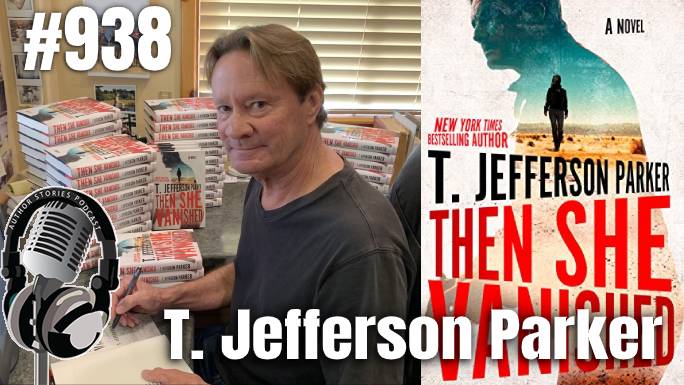 T. Jefferson Parker returns to the show today with his new release Then She Vanished.

What if the client who’s hired you can’t be trusted…and the woman you’re looking for doesn’t want to be found? With Then She Vanished, three-time Edgar Award winner and New York Times-bestselling author T. Jefferson Parker delivers a new and pulse-pounding thriller.

Private Investigator Roland Ford has taken a job for a fellow Marine and a rising politician, Dalton Strait. Strait is contending with unexplained bombings of government buildings in his district…but that is not why he hired Ford. Strait’s wife, Natalie, has gone missing, leaving behind a cryptic plea for help. Strait has made many enemies during his time in politics–including some of his own family members–all of whom could be looking for revenge. But as Ford digs into the details of a troubled marriage, Natalie’s disappearance becomes more and more complicated.

Meanwhile, the bombings in the city intensify, with a mysterious group known only as the Chaos Committee claiming responsibility. Ford soon learns that the seemingly random attacks may be connected to the case he’s on–and suddenly, his hunt for a missing woman might decide the fate of an entire city.

T. Jefferson Parker was born in Los Angeles and has lived all his life in Southern California. He was educated in public schools in Orange County, and earned a bachelor’s degree in English from the University of California, Irvine, in 1976.
His writing career began in 1978, with a job as a cub reporter on the weekly newspaper, The Newport Ensign. After covering police, city hall and cultural stories for the Ensign, Parker moved on to the Daily Pilot newspaper, where he won three Orange County Press Club awards for his articles. All the while he was tucking away stories and information that he would use in his first book.

Parker’s first novel, Laguna Heat, was written on evenings and weekends while he worked as a reporter, and was published to rave reviews and made into an HBO movie starring Harry Hamlin, Jason Robards and Rip Torn.

Parker’s following novels — all dealing with crime, life and death in sunny Southern California — were published to rave reviews and appeared on many bestseller lists. His writing has been called “potent and irresistible” (Los Angeles Times), and “resonant, literate and powerful” (Kirkus). The New York Times wrote that “T. Jefferson Parker is a powerhouse writer.” Writing in the Washington Post, critic Carolyn See called The Triggerman’s Dance “a masterpiece.”

Parker’s last six crime novels — L.A. Outlaws, The Renegades, Iron River, The Border Lords, The Jaguar and The Fabulous and the Dead all feature Los Angeles County Sheriff’s Deputy Charlie Hood, and deal with dangers along the U.S./Mexico border. Lionsgate has bought the rights to bring Charlie Hood to the big screen.

In 2014, moved by the young Marines returning from Afghanistan through Camp Pendleton, Parker wrote Full Measure. This story, about a young man returning from bloody combat and trying to find his place in a changed America, was called “Compelling” by T.C. Boyle and “A Great American Book” by Luis Alberto Urrea.

Crazy Blood, a novel set in the high-stakes world of Olympic ski racing, followed in 2016.
Parker launched his news series, based on private investigator Roland Ford, in 2017 with The Room of White Fire. The series is set in north San Diego County, not far from Parker’s adopted hometown of Fallbrook.

The next Roland Ford novel, Swift Vengeance, was released on August 21, 2018.

When not working, Parker spends his time with his family, hiking, fishing, beachcombing, exercising his dogs. He cannot pass by a body of water without wanting to fish it. He also enjoys rock hounding, cycling and being outdoors.