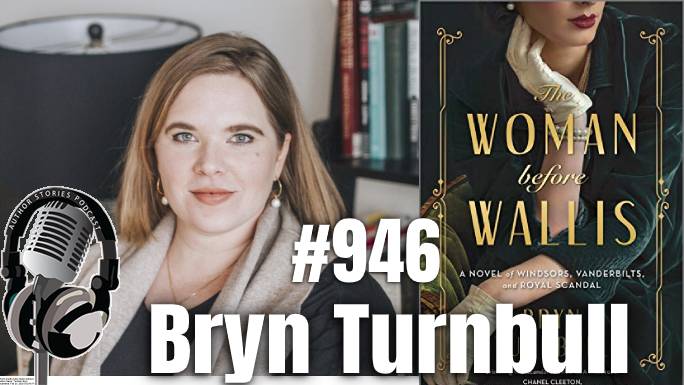 Today’s author interview guest is Bryn Turnbull, author of The Woman Before Wallis: A Novel of Windsors, Vanderbilts, and Royal Scandal.

“Brimming with scandal and an equal amount of heart…a sweeping yet intimate look at the lives of some of history’s most notorious figures from Vanderbilts to the Prince of Wales… A must-read.”—Chanel Cleeton, New York Times bestselling author of When We Left Cuba and Next Year in Havana

“Bryn Turnbull takes a story we think we know and turns it on its head, with captivating results… A beautifully written, meticulously researched and altogether memorable debut.”—Jennifer Robson, USA TODAY bestselling author of The Gown

For fans of The Paris Wife and The Crown, this stunning novel tells the true story of the American divorcée who captured Prince Edward’s heart before he abdicated his throne for Wallis Simpson.

In the summer of 1926, when Thelma Morgan marries Viscount Duke Furness after a whirlwind romance, she’s immersed in a gilded world of extraordinary wealth and privilege. For Thelma, the daughter of an American diplomat, her new life as a member of the British aristocracy is like a fairy tale—even more so when her husband introduces her to Edward, Prince of Wales.

In a twist of fate, her marriage to Duke leads her to fall headlong into a love affair with Edward. But happiness is fleeting, and their love is threatened when Thelma’s sister, Gloria Morgan Vanderbilt, becomes embroiled in a scandal with far-reaching implications. As Thelma sails to New York to support Gloria, she leaves Edward in the hands of her trusted friend Wallis, never imagining the consequences that will follow.

Bryn Turnbull takes readers from the raucous glamour of the Paris Ritz and the French Riviera to the quiet, private corners of St. James’s Palace in this sweeping story of love, loyalty and betrayal.

When she was eleven years old, Bryn Turnbull accidentally put her foot through a single-pane window while leafing through a well-worn copy of Sandman (Volume 2). The incident, which resulted in a trip to the hospital, five stitches, and a unique application of superglue, taught her two things: one, that reading is not, and should not be attempted as, a full-contact sport; and two, that writers can create worlds within a book so absorbing, so completely and utterly all-encompassing, that they can drive readers to such distraction as to forget the outside world entirely.

Today, Bryn is a writer of historical fiction. Equipped with a Master of Letters in Creative Writing from the University of St. Andrews and a Bachelor’s degree in English Literature from McGill University, Bryn, who resides in Toronto, writes books intended to drive readers to similar levels of distraction – to transport them into different eras and different worlds, but hopefully not into the hospital.

With a penchant for fountain pens that leak ink onto her fingers, antique furniture, and traveling, Bryn is, admittedly, an old soul with limited patience for modern conveniences – but if you want to get in touch with her, email – that most ancient of online technologies – is the best way to do it.

Bryn is represented by Kevan Lyon of the Marsal Lyon Literary Agency. Her debut novel, The Woman Before Wallis, will be released by Mira on July 21, 2020.