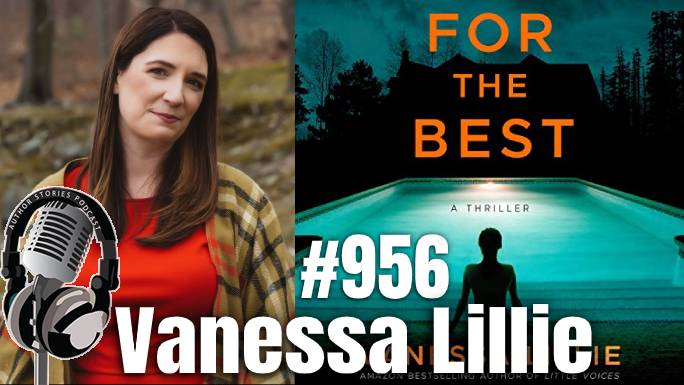 Today’s author interview guest is Vanessa Lillie, author of For the Best.

Suspected of a murder she can’t remember, a troubled woman takes an unusual approach to proving her innocence in this gripping thriller from the bestselling author of Little Voices.

When Jules Worthington-Smith’s wallet is found next to a dead man, she becomes the prime suspect in his murder. After struggling for years to build the perfect family and career, she’s dangerously close to losing everything.

Sure of her innocence, Jules is desperate to clear her name. But there’s one big problem: she was blackout drunk when the murder took place and can’t remember what happened.

Unsatisfied with the police’s handling of the case, Jules embarks on her own gin-fueled murder investigation. As she uncovers fresh clues, she starts a true-crime vlog that becomes a viral sensation, pushing her into the public eye. It’s not long before the ordeal forces Jules to confront her demons, including her turbulent childhood and excessive drinking.

The deeper Jules digs, the more dirt she uncovers about the murder and herself. Unexpected truths pile up until she’s buried so deep even finding the killer might not be enough to set her free.

Vanessa Lillie is originally from Miami, Oklahoma, where she spent a lot of her childhood investigating local ghost stories at the public library. After college, she worked in Washington, DC, and later moved to Providence, Rhode Island, which she, her husband, and her dinosaur-aficionado son call home. A regular contributor to the Providence Journal, she enjoys organizing book events and literary happenings around town.