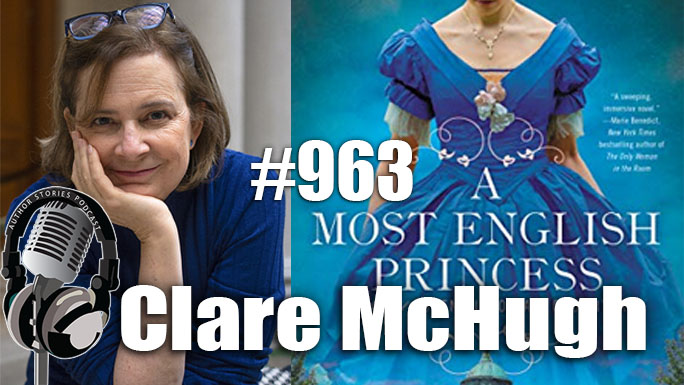 Today’s author interview guest is Claire McHugh, author of A Most English Princess: A Novel of Queen Victoria’s Daughter.

“In this sweeping, immersive novel, A Most English Princess draws readers into the mesmerizing world of the eldest daughter of Queen Victoria – Princess Vicky – as she emerges into a powerful force in her own right and ascends to become the first German Empress.” —Marie Benedict, New York Times bestselling author of The Only Woman in the Room

To the world, she was Princess Victoria, daughter of a queen, wife of an emperor, and mother of Kaiser Wilhelm. Her family just called her Vicky…smart, pretty, and self-assured, she changed the course of the world.

January 1858: Princess Victoria glides down the aisle of St James Chapel to the waiting arms of her beloved, Fritz, Prince Frederick, heir to the powerful kingdom of Prussia. Although theirs is no mere political match, Vicky is determined that she and Fritz will lead by example, just as her parents Victoria and Albert had done, and also bring about a liberal and united Germany.

Brought up to believe in the rightness of her cause, Vicky nonetheless struggles to thrive in the constrained Prussian court, where each day she seems to take a wrong step. And her status as the eldest daughter of Queen Victoria does little to smooth over the conflicts she faces.

But handsome, gallant Fritz is always by her side, as they navigate court intrigue, and challenge the cunning Chancellor Otto von Bismarck, while fighting for the throne—and the soul of a nation. At home they endure tragedy, including their son, Wilhelm, rejecting all they stand for.

Clare McHugh tells the enthralling and riveting story of Victoria, the Princess Royal—from her younger years as the apple of her father Albert’s eyes through her rise to power atop the mighty German empire to her final months of life.

Before turning to fiction, Clare McHugh worked as a journalist, magazine editor, and history teacher. She chose as the subject of her first novel the eldest daughter of Queen Victoria–known to her family as Vicky. To tell the dramatic and tragic story of this precocious princess, who later become the mother of Kaiser Wilhelm and the Empress of Germany, the author dove into the archives and studied the letters exchanged by Vicky and Queen Victoria. When not in the library, McHugh enjoys cooking, travel and reviewing books. Born in London, she grew up in the US and graduated from Harvard with a degree in European history. The mother of two grown children she lives in Washington DC and Amagansett NY with her husband, a fellow writer and editor.