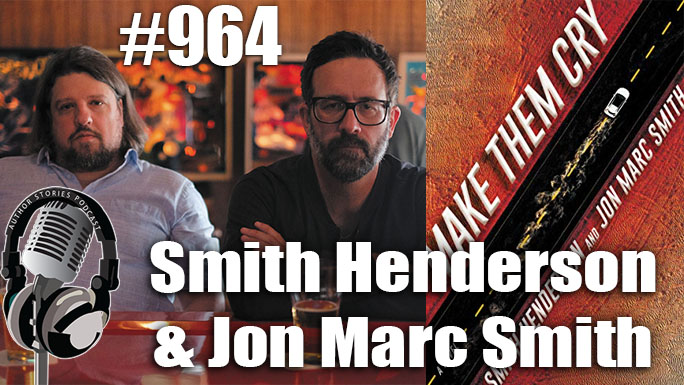 On today’s show Smith Henderson & Jon Marc Smith join me to talk about their new book Make Them Cry.

For fans of The Border and Jason Bourne, Make Them Cry is an explosive action thriller about a DEA agent sucked into a dangerous turf war on the US-Mexico border.

It’s hard to make Diane Harbaugh flinch. A former prosecutor notorious for her aggressive tactics, she’s now a DEA agent who interrogates witnesses so effectively, she has them confessing in tears. But when she hears from Gustavo, a high-ranking cartel member with an invaluable secret about the international black market, she’s thrown for a loop. She heads to Mexico to meet him, and her entire understanding of justice and duty is thrown into question.

Gustavo sends her down a rabbit hole that leads to a criminal conspiracy more pervasive than anything she and the DEA ever suspected. She teams up with Ian Carver, a disillusioned CIA agent, and begins to unravel layers of deceptions, grifts, and schemes that date back to the beginnings of the Afghanistan War. As they learn more, they become the target of cartel assassins, embittered spies, and even their own government. They are at the center of an international manhunt with world-changing consequences—and the only way out is for Diane to do the one thing she promised herself she’d never do. Stylishly written and relentlessly plotted, Make Them Cry is an action-packed thriller of unimaginable stakes.

SMITH HENDERSON is the author of the novels Make Them Cry (Ecco) and Fourth of July Creek (Ecco). The latter was a 2014 New York Times Notable Book and the winner of the 2015 John Creasy (New Blood) Dagger Award and the 2014 Montana Book Award. It was also a finalist for the 2015 PEN Center USA Award for Fiction, the James Tait Black Prize, the Center for Fiction’s Flaherty-Dunnan First Novel Prize, the Ken Kesey Award for the Novel, and the Texas Institute of Letters Jesse H. Jones Award for Best Work of Fiction.

The novel also made the longlists for the 2016 International DUBLIN Literary Award, the Folio Prize, and the VCU Cabel First Novelist Award.

Henderson was awarded a 2011 PEN Emerging Writers Award in fiction, and a 2011 Philip Roth Residency in Creative Writing at Bucknell University. His short story, “Number Stations” won a Pushcart Prize and a finalist honors for the University of Texas Keene Prize, where he was a Michener Center for Writing Fellow.

An accomplished screenwriter, he was a staff writer on the “The Son” for AMC and co-wrote “Dance With The One”, a 2010 South By Southwest Narrative Prize Finalist. His short story “Olympia” is currently in development at Treehouse Pictures.

His fiction has been anthologized and published in Best American Short Stories, Tin House, American Short Fiction, One Story, New Orleans Review, Makeout Creek, and Witness. He lives in Montana.