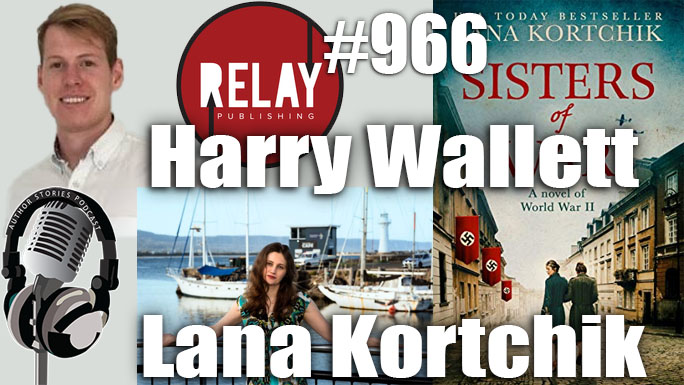 Today we have a great double-header of an episode. First we talk with Harry Wallett of Relay Publishing, then we talk to Lana Kortchik, author of Sisters of War: A gripping and emotional World War Two historical novel.

Get started with Relay Publishing today!

Relay Publishing is a multi-genre fiction publishing company running since 2013. We have a catalogue of over 875 books in both English, German and French, with our focus being on romance, young adult fantasy, science fiction, thrillers and post-apocalyptic.

After seven years working with publishing freelancers, we like to think we know what makes a creative, fun, and collaborative online environment. If you check out Relay’s Testimonials you’ll see we have a reputation for clear instructions, paying fairly and on time, and helping writers develop their craft.

We have a small team of people running the company, handling the coordination of projects, marketing, finance, human resources and administration. We also work with over a hundred creatives to bring our books to life. If you love stories, you’ll be among great company!

We are a book publishing and packaging company. We develop great story ideas and collaborate with talented writers and editors to bring them to life. Story ideas and concepts are created by our in-house team, which are then fleshed out into detailed character profiles and outlines. The outlines are then given to our manuscript team – comprised of a ghostwriter and editor. The focus throughout is on exceptional storytelling, and the writer works closely with an editor to ensure the reader will be blown away by both the story and the prose. Depending on word count, the process from concept creation through to finished novel can range from four to twelve months.

Then the book enters the marketing phase where the cover and blurb are optimized to sell, and various advertisements are set up to promote the book. Every book is made with the target of hitting the bestseller list.

Can their bond survive under the shadow of occupation?

For fans of The Tattooist of Auschwitz and The German Midwife comes this unforgettable tale of love, loss, family, and the power of hope.

Kiev, 1941: Watching the Red Army withdraw from Ukraine in the face of Hitler’s relentless advance, sisters Natasha and Lisa Smirnova realise their lives are about to change forever.

As the German army occupies their beloved city, the sisters are tested in ways they never thought possible. Lisa’s fiancé Alexei is taken by the invading army, whilst Natasha falls in love with Mark – a Hungarian soldier, enlisted against all his principles on the side of the Nazis.

But as Natasha and Lisa fight to protect the friends and family they hold dear, they must face up to the dark horrors of war and the pain of betrayal. Will they be strong enough to overcome the forces which threaten to tear their family apart?

Why readers love Sisters of War:

‘Captivating from the first page’

Originally published as The Story of Us.

Lana Kortchik grew up in two opposite corners of the Soviet Union – the snow-white Siberian town of Tomsk and the golden-domed Ukrainian capital, Kyiv. As a teenager, she moved to Australia with her mother. Lana and her family live on the Central Coast of NSW, where it never snows and is always summer-warm.

Lana studied IT at university and, as a student, wrote poetry in Russian that she hid from everyone. For over a decade after graduating, she worked as a computer programmer. When she returned to university to complete her history degree, her favourite lecturer encouraged her to write fiction. Lana hasn’t looked back, and never goes anywhere without her favourite pen because you never know when the inspiration might strike.

Lana’s short stories appeared in many magazines and anthologies, and she was the winner of the Historical Novel Society Autumn 2012 Short Fiction competition. Her first short story was about a couple in love and trapped on the opposite sides during World War II. A few years later, this story became a novel and was published by Endeavour Press. In 2018, Sisters of War was acquired by HQ Digital, an imprint of Harper Collins UK. A year and a half later, it became the USA Today bestseller.

Lana loves books, martial arts, the ocean and Napoleonic history. She can often be found on the couch or in bed, wearing her best pyjamas, typing on her laptop or scribbling something in her notebooks, while drinking camomile tea and eating chocolate. Her husband thinks she’s just being lazy.