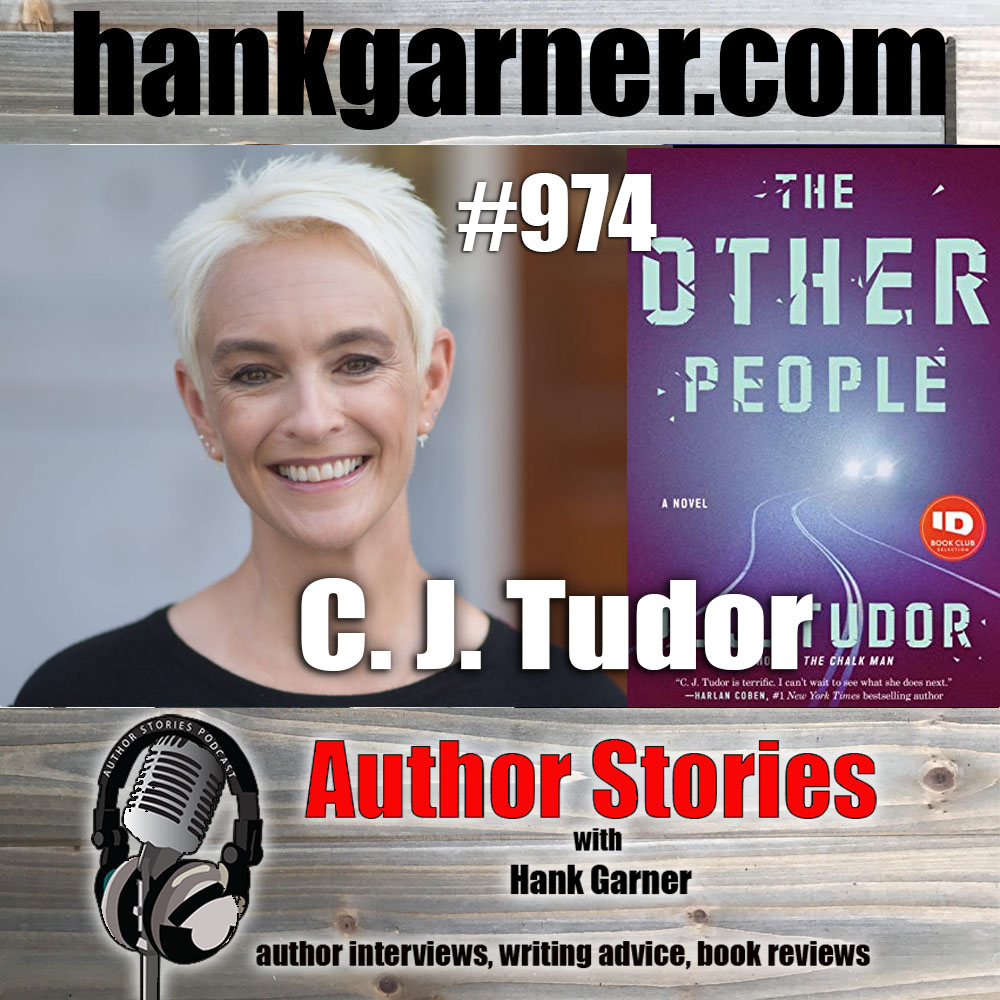 Today’s author interview guest is C. J. Tudor, author of The Other People.

A gripping thriller about a man’s quest for the daughter no one else believes is still alive, from the acclaimed author of The Chalk Man and The Hiding Place.

Q: Why are you called the Other People?
A: We are people just like you. People to whom terrible things have happened. We’ve found solace not in forgiveness or forgetting. But in helping each other find justice.

Driving home one night, stuck behind a rusty old car, Gabe sees a little girl’s face appear in its rear window. She mouths one word: Daddy. It’s his five-year-old daughter, Izzy. He never sees her again.

Three years later, Gabe spends his days and nights traveling up and down the highway, searching for the car that took his daughter, refusing to give up hope, even though most people believe she’s dead.

When the car that he saw escape with his little girl is found abandoned with a body inside, Gabe must confront not just the day Izzy disappeared but the painful events from his past now dredged to the surface.

Q: What sort of justice?
A: That depends on the individual. But our ethos is a punishment that fits the crime.

Fran and her daughter, Alice, also put in a lot of miles on the road. Not searching. Running. Because Fran knows what really happened to Gabe’s daughter. She knows who is responsible. And she knows what they will do if they ever catch up to her and Alice.

Q: Can I request to have someone killed?
A: If your Request is acceptable, and unless there are exceptional circumstances, we fulfill all Requests.

C. J. Tudor was born in Salisbury and grew up in Nottingham, where she still lives with her partner and young daughter.

She left school at sixteen and has had a variety of jobs over the years, including trainee reporter, radio scriptwriter, shop assistant, ad agency copywriter and voiceover.

In the early nineties, she fell into a job as a television presenter for a show on Channel 4 called Moviewatch. Although a terrible presenter, she got to interview acting legends such as Sigourney Weaver, Michael Douglas, Emma Thompson and Robin Williams. She also annoyed Tim Robbins by asking a question about Susan Sarandon’s breasts and was extremely flattered when Robert Downey Junior showed her his chest.

While writing the Chalk Man she ran a dog-walking business, walking over twenty dogs a week as well as looking after her little girl.

She’s been writing since she was a child but only knuckled down to it properly in her thirties. Her English teacher once told her that if she ‘did not become Prime Minister or a best-selling author’ he would be ‘very disappointed.’

The Chalk Man was inspired by a tub of chalks a friend bought for her daughter’s second birthday. One afternoon they drew chalk figures all over the driveway. Later that night she opened the back door to be confronted by weird stick men everywhere. In the dark, they looked incredibly sinister. She called to her partner: ‘These chalk men look really creepy in the dark . . .’

She is never knowingly over-dressed. She has never owned a handbag and the last time she wore heels (twelve years ago) she broke a tooth.

She loves The Killers, Foo Fighters and Frank Turner. Her favourite venue is Rock City.

Her favourite films are Ghostbusters and The Lost Boys. Her favourite authors are Stephen King, Michael Marshall and Harlan Coben.

She is SO glad she was a teenager in the eighties.

She firmly believes that there are no finer meals than takeaway pizza and champagne, or chips with curry sauce after a night out.

Everyone calls her Caz.