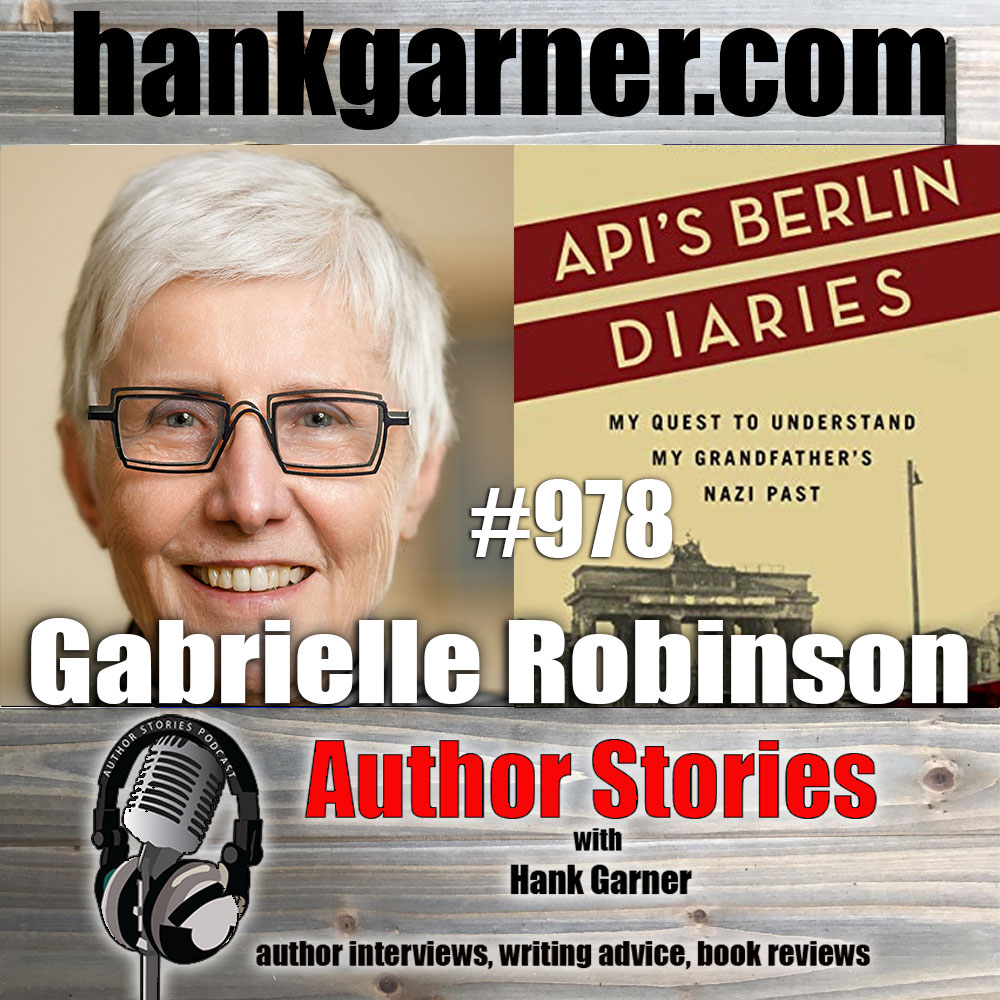 Today’s author interview guest is Gabrielle Robinson, author of Api’s Berlin Diaries: My Quest to Understand My Grandfather’s Nazi Past.

After her mother’s death, Gabrielle Robinson found two diaries her grandfather had kept while serving as doctor during the fall of Berlin 1945. He recorded his daily struggle to survive in the ruined city where little could be done for the wounded without water, light, and medications. But then the diaries revealed something that hit Robinson like a punch to the gut: Api, her beloved grandfather, had been a Nazi.

Robinson juxtaposes her grandfather’s harrowing account with her memories of his loving protection after the war and raises disturbing questions about the political responsibility we all carry as individuals. Moving and provocative, Api’s Berlin Diaries offers a firsthand and personal perspective on the far-reaching aftershocks of the Third Reich.

I love telling stories about people that reveal their personal situation within its historical context. One reason for my fascination with the intersection of the personal and historical may stem from my own experience. Born in Berlin in 1942, my family fled the city in 1945. This was for me the beginning of a string of migrations, boarding schools in Vienna and on the Baltic, a small town near Hamburg, a move to the US, first Urbana, Illinois, then a year in New York, and several in London where I earned a PhD in Modern Drama. I taught at the University of Illinois, Indiana University South Bend, and abroad.

The Reluctant Nazi: Searching for my Grandfather.
Recently discovered diaries written by her grandfather in Berlin 1945 not only revealed the horrors of the bombing and the fall of Berlin, but also that her beloved grandfather had been a Nazi. Robinson shares her grandfather’s harrowing account of what it was like to live in Berlin as Hitler’s Reich collapsed, but also deals with her own reaction to his Party membership and raises disturbing questions about political responsibility and the far reaching aftershocks of the Second World War. In this moving and provocative book Robinson offers a first-hand and personal perspective on the history of that time and her own inconvenient past.”

Better Homes of South Bend: An American Story of Courage
How African American workers at Studebaker in South Bend stood up against housing discrimination of the 1950’s to build twenty two homes in a white neighborhood and create a legacy.

German Settlers of South Bend
Stories of the German and German Jewish immigrants who helped build the town in the 19th Century.