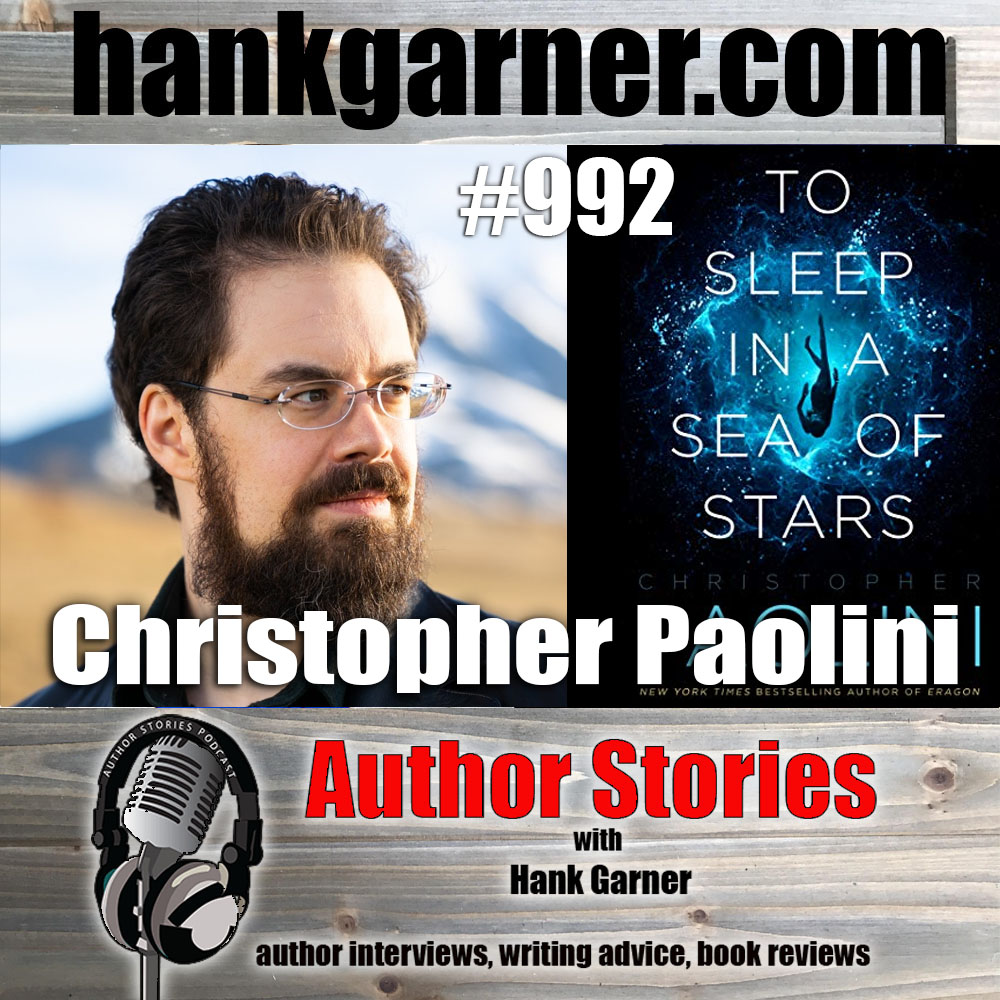 Today Christopher Paolini once again joins me on Author Stories. Christopher stops by to talk about his new Sci Fi novel To Sleep in a Sea of Stars, published by TOR.

To Sleep in a Sea of Stars is a brand new epic novel from #1 New York Times bestselling author of Eragon, Christopher Paolini.

During a routine survey mission on an uncolonized planet, Kira finds an alien relic. At first she’s delighted, but elation turns to terror when the ancient dust around her begins to move.

As war erupts among the stars, Kira is launched into a galaxy-spanning odyssey of discovery and transformation. First contact isn’t at all what she imagined, and events push her to the very limits of what it means to be human.

While Kira faces her own horrors, Earth and its colonies stand upon the brink of annihilation. Now, Kira might be humanity’s greatest and final hope . . .

Christopher Paolini was homeschooled by his parents. As a child, he often wrote short stories and poems, made frequent trips to the library, and read widely. Some of his favorite books were Bruce Coville’s Jeremy Thatcher, Dragon Hatcher, Frank Herbert’s Dune, and Raymond E. Feist’s Magician (now available in volumes one and two), as well as books by Anne McCaffrey, Jane Yolen, Brian Jacques, E.R. Eddison, David Eddings, and Ursula K. Le Guin.

The idea of Eragon began as the daydreams of a teen. Christopher’s love for the magic of stories led him to craft a novel that he would enjoy reading. The project began as a hobby, a personal challenge; he never intended it to be published. Before he began writing Eragon, he plotted out the entire adventure. He found that doing some of the same things as his characters allowed him to better understand their world, as well as to think of descriptions that otherwise would not have occured to him. To this end he forged his own knives and swords, made chain mail, spun wool, camped in the Beartooth Mountains, made his own bow, built survival shelters, learned to track game, fletched arrows, felled trees, hiked, and camped. In short, the books embody a great deal of his experience of living in Montana.

His work also combined elements gathered from research and from his imagination. He read a huge amount of folklore while growing up, ranging from the Brothers Grimm to Beowulf, Nordic sagas, and the Aeneid, along with contemporary fantasy and science fiction. In addition, he learned about weaponry, food, clothing, and customs from the Middle Ages, which is roughly the era he envisioned Eragon living in. Armed with that information, he daydreamed the scenes with his characters. Then he took pen to paper and tried to recreate those images with words.

Christopher was fifteen when he wrote the first draft of Eragon. He took a second year to revise the book, and then gave it to his parents to read. The family decided to self-publish the book and spent a third year preparing the manuscript for publication: copyediting, proofreading, designing a cover, typesetting the manuscript, and creating marketing materials. During this time Christopher drew the map for Eragon, as well as the dragon eye for the book cover (which now appears inside the Knopf hardcover edition). The manuscript was sent to press and the first books arrived in November 2001. The Paolini family spent the next year promoting the book at libraries, bookstores, and schools in 2002 and early 2003.

In summer 2002, author Carl Hiaasen, whose stepson had read a copy of the self-published book while on vacation in Montana, brought Eragon to the attention of his publisher, Alfred A. Knopf Books For Young Readers, an imprint of Random House Children’s Books. Michelle Frey, executive editor at Knopf, contacted Christopher and his family to ask if they might be interested in having Knopf publish Eragon. The answer was yes, and after another round of editing, Knopf published Eragon in August 2003. The book immediately became a New York Times Best Seller.

After an extensive United States and United Kingdom tour for Eragon that lasted into 2004, Christopher began writing his second book, Eldest, which continues the adventures of Eragon and the dragon Saphira. Upon publication of Eldest, in August 2005, Christopher toured throughout the United States, Canada, United Kingdom, Spain, Germany, France, and Italy.

In December 2006, Fox 2000 released the movie adaptation of Eragon in theaters around the world.

Early in 2007, as Christopher was writing Book Three, he realized that the plot and characters demanded more space than could fit into one volume and that a fourth book would be necessary to give each story element the attention it deserved. What began as the Inheritance trilogy became the Inheritance cycle. Book Three, Brisingr, was published on September 20, 2008.

In 2009 Christopher wrote Eragon’s Guide to Alagaësia—an illustrated tour of the most interesting peoples, places, and things in Eragon’s world. It was published in November of the same year.

Book Four, Inheritance, published November 8, 2011, completes the story that Christopher envisioned years ago when he first outlined the adventure. His tour for Inheritance took Christopher across the United States and to Canada, France, Germany, Italy, Czech Republic, Spain, The Netherlands, Australia, and New Zealand.

In 2011, the Guinness World Records recognized him as the “youngest author of a bestselling book series.”

Christopher is grateful to all his readers. He is especially heartened to hear that his books have inspired young people to read and to write stories of their own. His most recent release is The Fork, the Witch, and the Worm. He is currently working on several projects set in other worlds. His debut science fiction novel, To Sleep in a Sea of Stars, is now available.