Episode 529 | Jaime Castle Peels Back The Layers On Pantsing 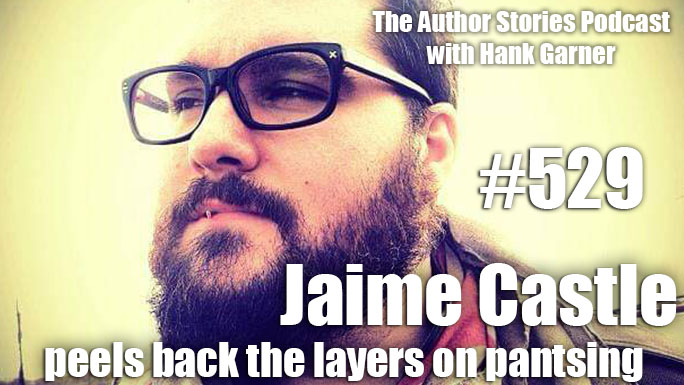 Today’s show features fantasy author Jaime Castle, author of The Buried Goddess Saga. We talk about his unique take on discovery writing and what he calls ‘‘ the story. This show is a great counterpart to last week’s show with Josh Hayes on outlining, and you’ll pick up some tips that will help round out your author toolkit.

Self-proclaimed “World’s Greatest Thief”, Whitney Fierstown, has yet to find a trinket or treasure he couldn’t steal. He nearly pulls off the heist of the century by snatching the Glass Crown off the dying king’s head until rotten luck throws him into the path of Torsten Unger, a steadfast knight determined to save his vulnerable kingdom.  Torsten offers this ultimatum: rot and die in a dank cell or join him on a dangerous expedition and put his skills to good use. The Queen’s treasonous brother has cursed the Crown Prince by taking a piece of his soul and hiding it in the haunted Webbed Woods. Only a master thief can steal it back.  Rebellion building in the south. Madness seated upon the throne. Famine and death spreading throughout the land. The kingdom is in peril. If this unlikely pair is to thwart their devious target, save the prince, and survive the horrifying monster lurking in the darkness, they must first put aside their differences…or die .

Jaime Castle is the is the co-author of The Buried Goddess Saga (along with Science Fiction author Rhett C. Bruno.) He lives in Texas with his wife and two children and enjoys anything creative. A self-proclaimed comic book nerd and artist, he spends what little free time he can muster with his art tablet. Are you ready to enlist in the King’s Shield? Join Jaime and Rhett’s Fantasy Newsletter and get access to exclusive content, like Pickaxe, the first in a short story series called Legends of Pantego that will dig into the deep history of the world you’ve come to love in the Buried Goddess Saga. Sign up here: www.jaimecastle.com/kings-shield/