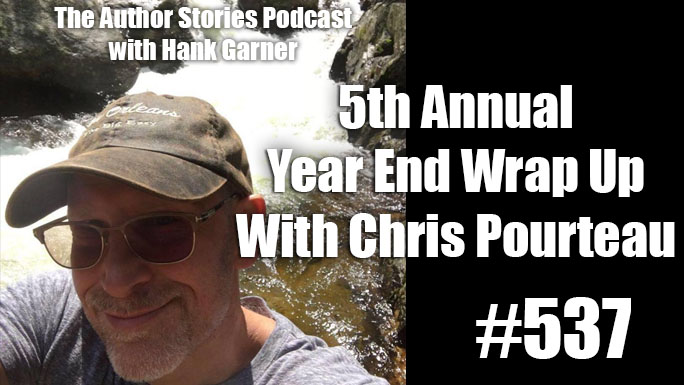 Today Chris Pourteau joins me for the fifth consecutive year to close out 2018. Each year we meet up to talk about our thoughts on the happenings in the world of books and story telling. We talk about everything from our book of the year picks, new authors continuing existing franchises when the creator passes on, Bohemian Rhapsody, the passing of a geek legend, and much more.

From Book 1:  Four lives collide as Earth stands on the brink of mass extinction…

Though some believe our future lies among the stars, the American President funds the Lazarus Protocol—a last-ditch attempt to reverse Earth’s climate crisis through geoengineering. But the New Earth Order—a mysterious league of reactionary activists with sleeper agents around the world—pursues another outcome: the subjugation of mankind to nature itself.

A brilliant billionaire who wants to save the world. A lunar engineer called home to bury her father. A disgraced veteran haunted by yesterday’s mistakes. A US Army colonel, desperate to save as many people as possible.

Four lives. One planet. And one last chance to save it…

Brought to you by the best-selling writing team of Bruns & Pourteau, The Lazarus Protocol is the first installment in The SynCorp Saga, a new series of dark sci-fi thrillers about the corporate takeover of our solar system.

Pick up The Lazarus Protocol to discover this exciting new series today!

I’ve made a living at one time or another as a teacher, a lab technician helping to recover one of Christopher Columbus’s ships, and, for the past 25 years, a professional technical writer and editor

My first novel, Shadows Burned In, won the 2015 eLite Book Award Gold Medal for Literary Fiction. In November 2015, I edited and produced the collection Tails of the Apocalypse, which features short stories set in different apocalyptic scenarios with animals as main characters. In 2017, I co-helmed a sequel of sorts, Chronicle Worlds: Tails of Dystopia—a similar collection of animal-centric stories, this time set in various existing dystopian worlds of their authors—with Future Chronicles Series Editor Samuel Peralta.

Among novel-length works, I recently co-authored a Sci-Fi series called the First Swarm War with author David Bruns set in Nick Webb’s Legacy Fleet Kindle world (a kind of Battlestar Galactica meets Aliensuniverse). David’s first novel in the FSW series is called Invincible, and my sequel is Avenger. I also wrote a novella prequel to the series called Tarantula. You can find my other works (short stories, novels, and anthologies) on this site. David and I are currently developing a near-future Sci-Fi dystopian universe together set to debut in summer 2018.

I’ve been influenced by writers both modern and classical as influences, notable among them Bernard Cornwell, Stephen King, George R.R. Martin, Toni Morrison, Edgar Allan Poe, J.R.R. Tolkien, and Mark Twain. Other major influences include fellow Texan and singer-songwriter James McMurtry, Groucho Marx, and a little-known comedy troupe from England you’ve probably never heard of named Monty Python. (Python is always happy to have someone shill their name as long as they don’t have to pay for it and might get a chance to sell you something, so there you go, guys. Regards from Texas.)

As far as current reading interests go, I prefer science fiction and fantasy and historical fiction, which you could probably guess from my list of influences. I’m also a die-hard Star Trek fan and prefer Sci-Fi dramas like Battlestar Galactica (the reboot), Philip K. Dick’s Electric Dreams, Stranger Things, and Orphan Black when I flip on the tube.