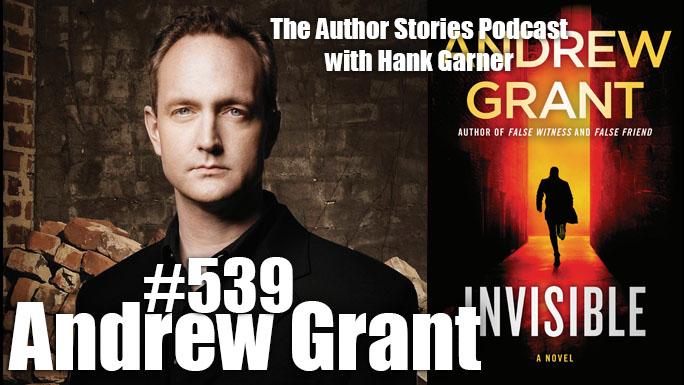 Thriller author Andrew Grant joins me today to talk about his writing career and his new book Invisible.

An Army veteran and intelligence agent goes undercover as a janitor at a federal courthouse to pursue his own brand of justice in a thriller that’s part John Grisham, part Robert Crais.

As a young man, Paul McGrath rebelled against his pacifist father by becoming a standout Army recruit and the star of his military intelligence unit. But lingering regrets about their relationship make him return home, only to find his father dead, seemingly murdered. When the case ends in a mistrial—after a key piece of evidence disappears—something doesn’t smell right to McGrath. So he puts his arsenal of skills to work to find out just how corrupt the legal system is. And to keep digging, he gets a job at the courthouse. But not as a lawyer or a clerk. . . .

Now McGrath is a janitor. The perfect cover, it gives him security clearance and access to the entire building. No one notices him, but he notices everyone. He notices when witnesses suddenly change their stories. When jury members reverse their votes during deliberation. When armies of corporate attorneys grind down their small-time adversaries with endless tactical shenanigans. While McGrath knows that nothing he discovers can undo his past wrongs or save his father, he finds his new calling brings him something else: the chance to right current wrongs and save others. And by doing so—just maybe—to redeem himself . . . if the powerful and corrupt don’t kill him first.

“The masterful Andrew Grant outdoes himself with this deliciously twisty, magnetic thriller. Fiercely redemptive, with its clever, profoundly moving, and altogether captivating David and Goliath hook, Invisible is a winner.”—Sara Blaedel, #1 internationally bestselling author of The Forgotten Girls

“Paul McGrath is not just a janitor—he’s a terrific new hero in what promises to be a fantastic and original series by Grant. Paul may be invisible . . . but his results are not in this intense mystery thriller that will leave you wanting more. In a word? Awesome.”—Allison Brennan, New York Times bestselling author of Too Far Gone

“Invisible is a riveting read from cover to cover. I love getting in on the ground floor of a new series, especially when it’s sure to be a hit!”—John Gilstrap, New York Times bestselling author of the Jonathan Grave series

Andrew Grant was born in Birmingham, England in May 1968. He went to school in St Albans, Hertfordshire and later attended the University of Sheffield where he studied English Literature and Drama. After graduation, Andrew set up and ran a small independent theatre company which showcased a range of original material to local, regional and national audiences. Following a critically successful but financially challenging appearance at the Edinburgh Fringe Festival, Andrew moved into the telecommunications industry as a ‘temporary’ solution to a short-term cash crisis. Fifteen years later, after carrying out a variety of roles including several which were covered by the UK’s Official Secrets Act, Andrew became the of a widespread redundancy programme. Freed once again from the straightjacket of corporate life, he took the opportunity to answer the question, what if